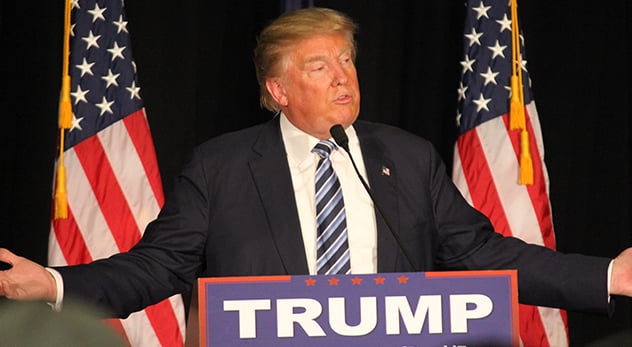 On Super Tuesday, the chairman of Liberty University’s board of trustee’s executive committee said he can no longer remain silent about college president Jerry Falwell Jr’s endorsement of Donald Trump.

“I’ve been concerned for Liberty University for a couple of months now, and I’ve held my tongue,” Mark DeMoss told The Washington Post. “I think a lot of what we’ve seen from Donald Trump will prove to be difficult to explain by evangelicals who have backed him. Watching last weekend’s escapades about the KKK, I don’t see how an evangelical backer can feel good about that.”

DeMoss said he has discussed his opinion of the endorsement with Falwell but “this appears to be something we’re just going to disagree on.” Falwell endorsed the real estate mogul in January, but claimed his views were not intended to represent the university itself. Earlier that month when the Republican presidential frontrunner spoke at Liberty University. DeMoss said he was not upset that Trump addressed Liberty’s students but was surprised that “a speaker who understood evangelicals wouldn’t go to Liberty University and say ‘what the hell’ three times in his message.”

Falwell drew criticism from some conservative colleagues for likening Trump to Jesus and Martin Luther preceding his address to the student body. The school’s president also said that Trump reminded him of his father, Jerry Falwell Sr., who founded Liberty in the 1970s. DeMoss, who once served as Falwell Sr’s chief of staff, objected to the comparison.

“It bothered me that he said Donald Trump reminded him of his father,” DeMoss told The Post. “Donald Trump certainly does not demonstrate Jerry Falwell Sr.’s graciousness and love for people. Jerry Falwell Sr. would never have made fun of a political opponent’s face or makeup or ears. He would not have personally insulted anybody — ever.”

Falwell Jr. told The Washington Post that he felt DeMoss’s criticisms were “puzzling” and “was disappointed in him.”

“Any time you support a candidate, and you’re an official at a university, you just have to accept the fact that a large percentage of the community is not going to agree with you,” Falwell Jr. said. “I think our community is mature enough that they understand that all the administrators and faculty have their own personal political views.”

While several Liberty employees, faculty members, and former high-ranking officials told me they were also concerned about Falwell Jr’s endorsement of Donald Trump, none would agree to be quoted for this story. Another Liberty board member, Texas evangelist and former Marine Tim Lee, has tweeted several criticisms of Trump and his support for Senator Ted Cruz.

Though Trump carried the state of Virginia on Super Tuesday, Donald Trump placed third in the city of Lynchburg and fourth at the Liberty University precinct.