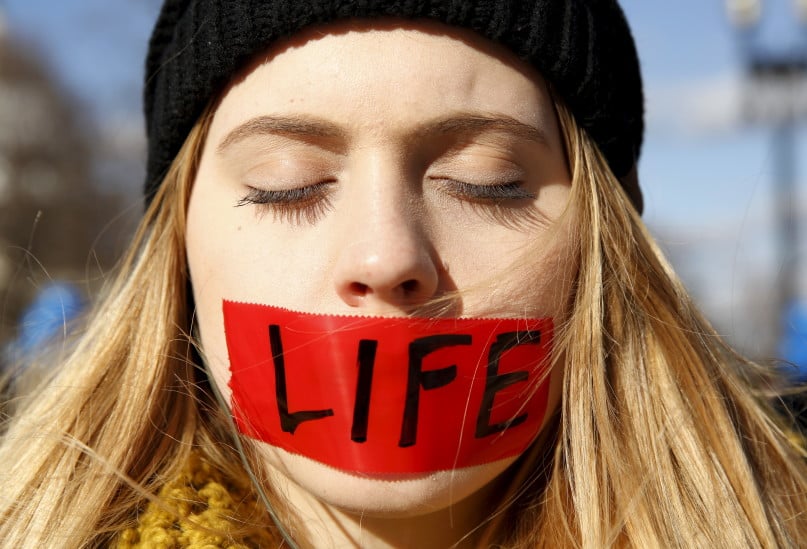 A protester with her mouth taped over with the word “life” stands in front of the U.S. Supreme Court on the morning the court takes up a major abortion case focusing on whether a Texas law that imposes strict regulations on abortion doctors and clinic buildings interferes with the constitutional right of a woman to end her pregnancy, in Washington March 2, 2016. REUTERS/Kevin Lamarque.

WASHINGTON — After years battling hundreds of restrictions imposed by conservative state legislatures, proponents of abortion rights could be on the verge of a big victory, a small defeat or a do-over.

Those three options loomed Wednesday after 85 minutes spent debating tough Texas restrictions inside the Supreme Court, a body still recovering from the sudden death last month of its most animated justice, Antonin Scalia.

Victory or defeat is what usually gets meted out a few months following these debates, but Scalia’s death has increased the chances for other options. Verdicts that are tied 4-4 will have only limited effect. Cases can be rescheduled for next term, or whenever the court gets a ninth justice. Or, as appeared possible Wednesday, cases can be sent back to lower courts for more fact-finding.

That could happen in Texas’ case because some facts are disputed, while others won’t be known for some time. The law passed in 2013 requires abortion clinics to meet strict surgical center standards and doctors to have admitting privileges at nearby hospitals. In its wake, more than 20 clinics have closed, but precisely why is a matter of dispute. And it’s unknown whether the 10 clinics that would remain open if the Supreme Court upholds the law can perform about 70,000 abortions annually.

“Would it be a) proper and b) helpful for this court to remand for further findings on clinic capacity?” Justice Anthony Kennedy asked Stephanie Toti, the lawyer representing Whole Woman’s Health and other Texas clinics.

While such a move might be viewed by many as punting on a major issue that’s taken years to work its way through lower courts, justices often are dissatisfied with trial records. Kennedy and Justice Stephen Breyer, perhaps the two most frequent swing votes, are the main advocates of do-overs. Chief Justice John Roberts often seeks the path of least resistance.

In the wake of Scalia’s death, those inclinations could win out more often. The justices may feel inclined to kick the can down the road, particularly on major issues such as abortion, rather than issue landmark decisions with one seat on the bench empty.

The alternatives are not attractive. They can deadlock 4-4 on cases ranging from immigration to labor union fees to voting rights, but that merely would uphold a lower court’s ruling and would set no national precedent. They can reschedule those cases for the 2016 term beginning in October, but with Senate Republicans thus far refusing to consider President Obama’s prospective nominee to replace Scalia, the vacancy may exist well into 2017.

With many other challenges to state abortion restrictions heading toward the Supreme Court from Alabama, Kansas, Louisiana, Mississippi, Tennessee, Wisconsin and elsewhere, the option of sending the Texas case back may seem the most attractive. That is, unless Kennedy can be persuaded to join the court’s four liberals in a major ruling striking down the Texas restrictions and, by inference, those in other states.

Such a big victory loomed large during the second half of Wednesday’s oral argument, when the court’s four liberal justices challenged the purpose of the law, its impact on women forced to drive hundreds of miles or cross state lines for abortions, and the state’s capacity to meet the demand with a dwindling number of licensed clinics and doctors.

As those arguments were heaped on Texas Solicitor General Scott Keller, Kennedy occasionally joined the chorus. He noted the potential “capacity problem.” He noted that fewer Texas women are using medications to induce abortions, while more are getting surgical procedures. “This may not be medically wise,” Kennedy said.

And when Justice Samuel Alito said states should be able to set extremely high standards for abortion care as long as they don’t pose an undue burden, Kennedy said that test needed to be “weighed against what the state’s interest is.”

To hear the liberal justices tell it, the state has no legitimate interest in making it more difficult to get an abortion than a colonoscopy or liposuction, two procedures with far greater risk than first-term abortions.

“Legislatures react to topics that are of public concern,” Keller answered. “The Legislature can still act to make abortion safer, which is precisely what Texas did here.”