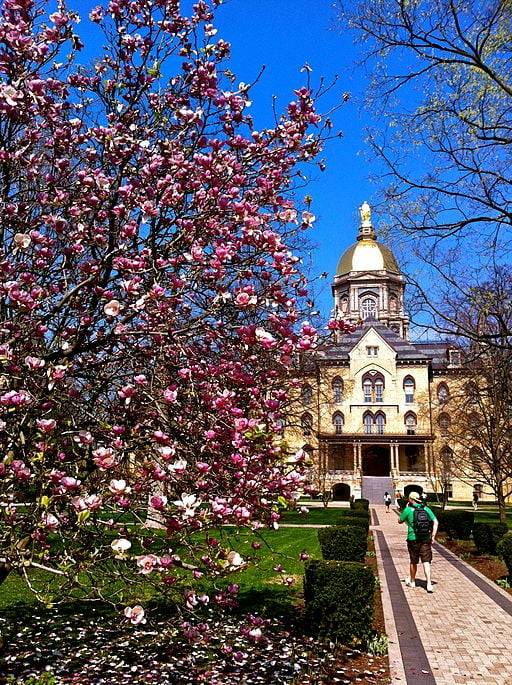 The Golden Dome in spring at the University of Notre Dame.

(RNS) Vice President Joe Biden and former House Speaker John Boehner, devout Catholics and longtime political foes, will share a prestigious honor from the University of Notre Dame in a pointed rebuke to the polarization and ugliness of American politics shown perhaps most vividly in the Republican nominating contest currently led by Donald Trump.

“We live in a toxic political environment where poisonous invective and partisan gamesmanship pass for political leadership,” Notre Dame’s president, the Rev. John Jenkins, said in a statement announcing that Biden, a Democrat, and Boehner, a Republican, would receive the 2016 Laetare Medal.

“Public confidence in government is at historic lows, and cynicism is high. It is a good time to remind ourselves what lives dedicated to genuine public service in politics look like,” Jenkins said Saturday (March 5). “We find it in the lives of Vice President Biden and Speaker Boehner.” The Rev. John Jenkins, right, president of the University of Notre Dame, speaks to John Dickerson at the fifth annual Washington Ideas Forum at the Newseum in Washington on November 13, 2013. Photo courtesy of REUTERS/Gary Cameron
*Editors: This photo may only be republished with RNS-NOTREDAME-BIDEN, originally transmitted on March 7, 2016.

The honor is called the Laetare Medal (pronounced lay-TAH-ray) because it is announced on Laetare Sunday, the fourth Sunday in Lent, a period of penance and fasting preceding Easter.

It is described as “the oldest and most prestigious honor accorded to American Catholics,” and it will be given at commencement on May 15. Washington Cardinal Donald Wuerl, a close adviser to Francis and a proponent of bipartisan engagement, will also receive an honorary doctorate.

Jenkins and Notre Dame were at the heart of the church’s own political war when the famous Catholic university, located near South Bend, Ind., invited President Obama to deliver the commencement address in May 2009, just months after he took office as the country’s first African-American chief executive.

Catholic conservatives, including bishops and cardinals who dominated the American hierarchy before the election of Pope Francis, were livid that Notre Dame would honor a president who supported abortion rights and a politician who one U.S. cardinal decried as an “aggressive, disruptive and apocalyptic” figure.

The 2013 conclave in the Vatican that elected Francis ushered in a markedly different tone of engagement and comity at the top. That shift came just as America’s secular political discourse deteriorated and a spirit of compromise began to wane, especially on the right.

The dynamic was pointedly illustrated by Francis’ historic visit to the U.S. last September. In an address to Congress, he called on the House and Senate to reject self-interest and work for the common good. 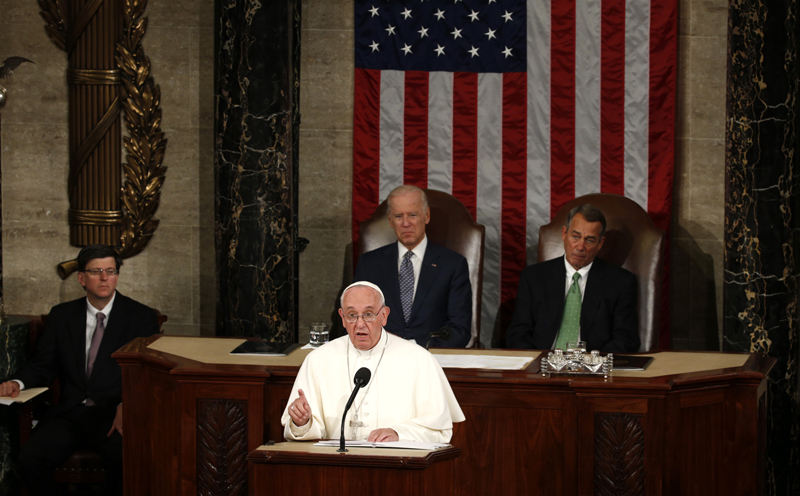 Pope Francis addresses a joint meeting of the U.S. Congress as Vice President Joe Biden, left, and Speaker of the House John Boehner, right, look on in the House of Representatives Chamber on Capitol Hill in Washington on September 24, 2015. Photo courtesy of REUTERS/Kevin Lamarque
*Editors: This photo may only be republished with RNS-NOTREDAME-BIDEN, originally transmitted on March 7, 2016.

The pope spoke as Biden and Boehner sat behind him, veteran Catholic lawmakers — and deal-makers — who were, respectively, first and second in line to the presidency.

Yet a day later, Boehner announced that he was resigning his post and retiring from Congress, a stunning move widely attributed to the intense opposition he faced from hard-line members of his own party.

In announcing the Laetare honorees, Jenkins referred to Boehner’s travails, and Biden’s reputation for seeking ways to govern effectively.

“While both have been loyal and committed partisans, they were leaders who put the good of the nation ahead of partisan victory, seeking through respectful dialogue honorable compromise and progress,” said the Notre Dame president.

“Speaker Boehner’s resistance to a simple reductionism made him suspect in his own party; Vice President Biden reminded his fellow Democrats that those in the other party are ‘our opponents, not our enemies.’

“In recognizing both men,” he said, “Notre Dame is not endorsing the policy positions of either, but celebrating two lives dedicated to keeping our democratic institutions working for the common good through dialogue focused on the issues and responsible compromise.”

Whether other church leaders will look as kindly on the Notre Dame honor — and on Biden, a supporter of abortion rights — remains to be seen. Boehner, too, has been sharply criticized by some Catholics for not doing enough to pass immigration reform or other key legislation on the agenda of the U.S. Conference of Catholic Bishops.

Michael Sean Winters, a columnist and analyst at National Catholic Reporter, a liberal-leaning periodical, said Wuerl’s presence was likely to “spread a kind of imprimatur over the award” that should blunt some criticisms.

The message sent by the award, he added, was clear, and momentous:

“Jenkins has made a bold move to begin the fraught process of dismantling the architecture of the culture warrior model of church that has plagued our church and our country for too long,” Winters wrote.

“It must be stated: That model of a culture war church is complicit in the politics of Donald Trump we witness today,” he continued. “The disrespect shown to President Obama by too many bishops in 2009 fed the anger than has now consumed the base of the Republican Party.”