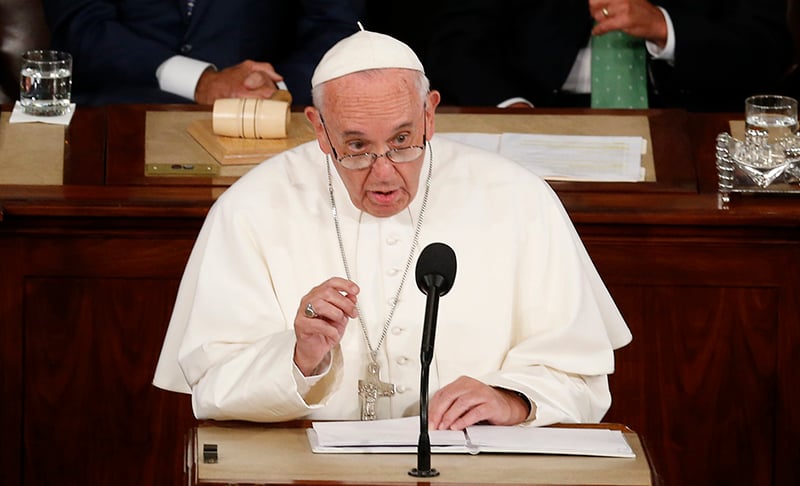 Pope Francis addresses a joint meeting of Congress in Washington, D.C., on Sept. 24, 2015. Photo courtesy of REUTERS/Jim Bourg
*Editors: This photo may only be republished with RNS-POPE-CONGRESS, originally transmitted on Sept. 24, 2015.

WASHINGTON (RNS) In his historic speech to a joint meeting of Congress on Thursday (Sept. 24), Pope Francis seemed to heed warnings to tame his often fiery rhetoric on topics such as capitalism and climate change. But his State of the Union-style address — the first ever to the House and Senate by a Roman pontiff — was in the end cold comfort to conservatives who had hoped their sharp criticisms might influence his agenda.

Instead, in a nearly hourlong speech, Francis carefully laid out a vision of political cooperation for the common good — one that highlighted economic injustice as a chief threat to family life, that stressed the moral imperative to care for the environment, that denounced profits “drenched in blood” from the arms industry and that forcefully argued for America to welcome, not reject, immigrants.

Click on the logo above to see additional stories about Pope Francis’ visit in the U.S.

“We, the people of this continent, are not fearful of foreigners, because most of us were once foreigners,” Francis told a packed House chamber, reminding those present that most of them are descendants of immigrants and that he, too, is the son of Italian immigrants who fled Benito Mussolini’s fascism to settle in Argentina.

“(W)hen the stranger in our midst appeals to us, we must not repeat the sins and the errors of the past,” Francis said, referring to anti-immigrant episodes in America’s history. “We must resolve now to live as nobly and as justly as possible, as we educate new generations not to turn their back on our ‘neighbors’ and everything around us.”

“Building a nation calls us to recognize that we must constantly relate to others, rejecting a mindset of hostility,” the pope said, speaking at the podium where the president delivers his annual State of the Union speech. Pope Francis addresses a joint meeting of Congress in Washington, D.C., on Sept. 24, 2015. Photo courtesy of REUTERS/Jonathan Ernst
*Editors: This photo may only be republished with RNS-POPE-CONGRESS, originally transmitted on Sept. 24, 2015.

Along the way, Francis also called for the abolition of the death penalty and signaled support for the Obama administration’s diplomatic breakthroughs with Iran and Cuba — the latter a development that the pope helped broker, and both of which have been strongly criticized by Republicans.

And despite expectations, and hopes among some that Francis might sharpen his talk with a clear denunciation of abortion and euthanasia — two issues in the news thanks to the controversy over secret Planned Parenthood videos and a right-to-die bill in California — the pope made only a passing reference to those issues.

“The golden rule,” he said, “also reminds us of our responsibility to protect and defend human life at every stage of its development.” He also seemed to nod at the issue of gay marriage, lamenting that “fundamental relationships are being called into question, as is the very basis of marriage and the family.”

READ: Girl gives letter to pope, fears her parents will be deported

Yet that language paled compared with his denunciation, for example, of gun violence and the weapons industry:

“Why are deadly weapons being sold to those who plan to inflict untold suffering on individuals and society?” Francis asked. “Sadly, the answer, as we all know, is simply for money: money that is drenched in blood, often innocent blood. In the face of this shameful and culpable silence, it is our duty to confront the problem and to stop the arms trade.” 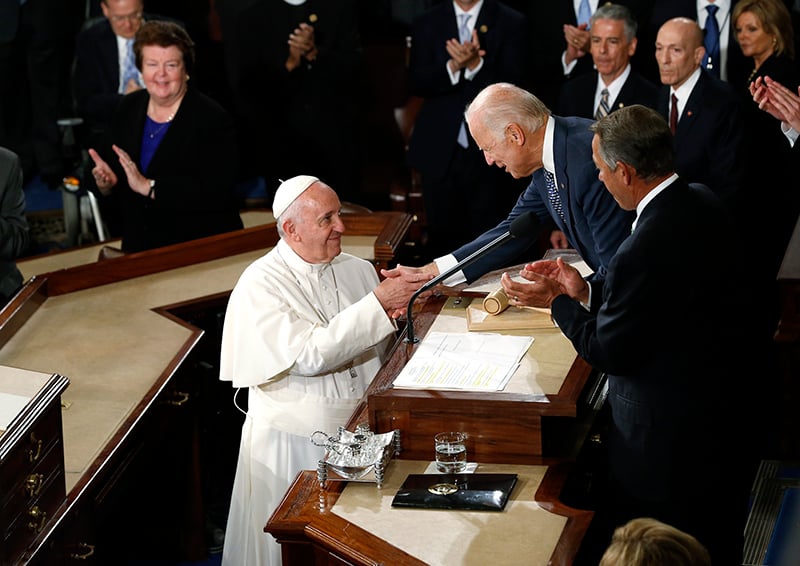 Pope Francis is greeted by Vice President Joe Biden as the pope arrives in the House chamber prior to addressing a joint meeting of Congress on Sept. 24, 2015. Photo courtesy of REUTERS/Jonathan Ernst
*Editors: This photo may only be republished with RNS-POPE-CONGRESS, originally transmitted on Sept. 24, 2015.

Greed was also at the heart of what may have been the pope’s chief challenge to the lawmakers: namely, to reject self-interest and work for the common good.

“If politics must truly be at the service of the human person, it follows that it cannot be a slave to the economy and finance,” said Francis said, who has previously lamented the way he says money corrupts politics.

In a similar vein, and in the meatiest passage in his speech, Francis blasted fundamentalism and polarization in religious communities, but also in economics and politics — a theme he has often addressed:

“A delicate balance is required to combat violence perpetrated in the name of a religion, an ideology or an economic system, while also safeguarding religious freedom, intellectual freedom and individual freedoms. But there is another temptation which we must especially guard against: the simplistic reductionism which sees only good or evil; or, if you will, the righteous and sinners.”

“The contemporary world, with its open wounds which affect so many of our brothers and sisters, demands that we confront every form of polarization which would divide it into these two camps. We know that in the attempt to be freed of the enemy without, we can be tempted to feed the enemy within. To imitate the hatred and violence of tyrants and murderers is the best way to take their place. 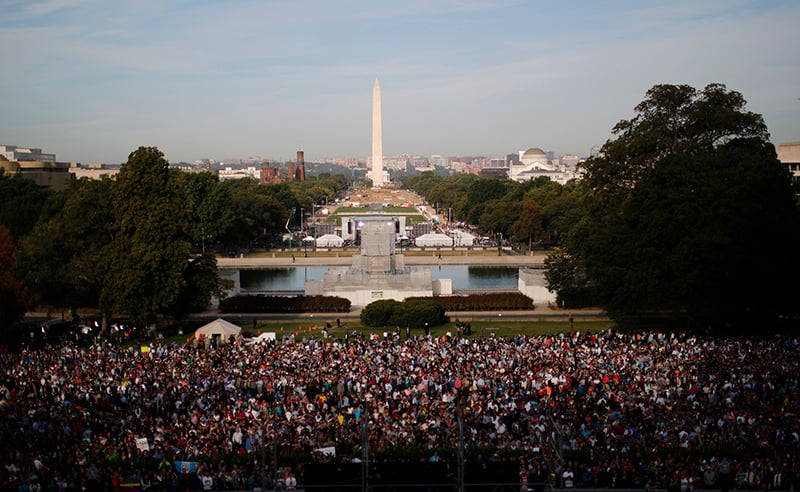 People pack the West Lawn of the U.S. Capitol to see Pope Francis appear on the House speaker’s balcony before his speech to Congress on Sept. 24 2015. Photo courtesy of REUTERS/Carlos Barria
*Editors: This photo may only be republished with RNS-POPE-CONGRESS, originally transmitted on Sept. 24, 2015.

The entire event was an extraordinary piece of political and religious theater: an Argentine pope from the Vatican, flanked over each shoulder by Vice President Joe Biden, a Catholic and a Democrat, and by House Speaker John Boehner, a Catholic and a Republican, and facing a Congress that has more Catholic members than ever, but also more who are vocally opposed in many ways to Francis’ teachings.

Indeed, an Arizona congressman, Rep. Paul Gosar, a Jesuit-educated Catholic, announced that he would boycott the talk — which has been the hardest ticket in town to snag — because he was upset with the pope’s high-profile effort to combat global warming.

If other Republicans were eager to be in the audience, and perhaps get in a photo with the pope, many of them have also taken public issue with Francis over his teachings on economic injustice and immigration, for example. Meanwhile, liberals and Democrats have eagerly embraced the pope’s social justice priorities and have downplayed Francis’ opposition to abortion, for instance.

Predicting what the pope would say, and how it would play politically, made for one of the hottest parlor games inside the Beltway in the weeks leading up to the speech.

But what they will take away from it, as a presidential campaign gets underway and ramps up the temptation to engage in political maneuvering and bickering, remains to be seen.