BEIJING (RNS) On a hazy Sunday morning, the fourth floor of a dingy gray office building in a far-flung region of this city is bursting with prayer.

In the Chinese capital, it’s not uncommon for church services to be held in Soviet-era office buildings. But the poorly lit, cracked-concrete dankness of this particular location cannot dampen the enthusiasm of this evangelical congregation.

Several hundred Chinese Christians pack the cavernous, L-shaped suite, clapping their hands and stomping their feet while a quartet at the front of the room lustily belts out songs praising “Yesu” (“Jesus” in Mandarin).

The men and women in attendance at the government-sanctioned Yizhuang Church are young, under 40, though several elderly Chinese women with their grandchildren in tow pack the venue.

When the band is finished, the bespectacled pastor, Du Jian Jun, takes the podium to deliver his sermon and the crowd settles into row upon row of blue, folding chairs.

Du, who speaks in Mandarin only — the only English heard in the service is a smattering of worshippers’ “amens” — delivers his message with the soothing cadence of a polished orator.

His sermon is simple: The lives we lead can be difficult, but with the guidance of Yesu we have the tools to carry on.

The pastor’s message is concise and straightforward; the relationship between Christianity and the Chinese government, however, is more complex.

A Chinese version of Christianity

In August 2014, a top-ranking official in the Chinese government informed the world that China was planning on nationalizing Christianity.

Wang Zuoan, director of the State Administration for Religious Affairs, told a forum in Shanghai that the “construction of Chinese Christian theology should adapt to China’s condition and integrate with Chinese culture.”

The announcement, unsurprisingly, triggered significant consternation among Christian groups in China and around the globe.

A pastor from Zhejiang province in eastern China said the intent of sinicizing Christianity is “to reform and remold Christianity into a (Communist) Party-dominated tool that can be used in its service.”

China Aid, a Christian human rights organization based in Midland, Texas, released a report stating that sinicization is nothing less than an attempt to “de-Christianize the church in China.”

It’s difficult, of course, for anyone outside the Communist government to know exactly what that means or what version of Christianity it might look like.

READ: Israel fractures by faith on politics and society 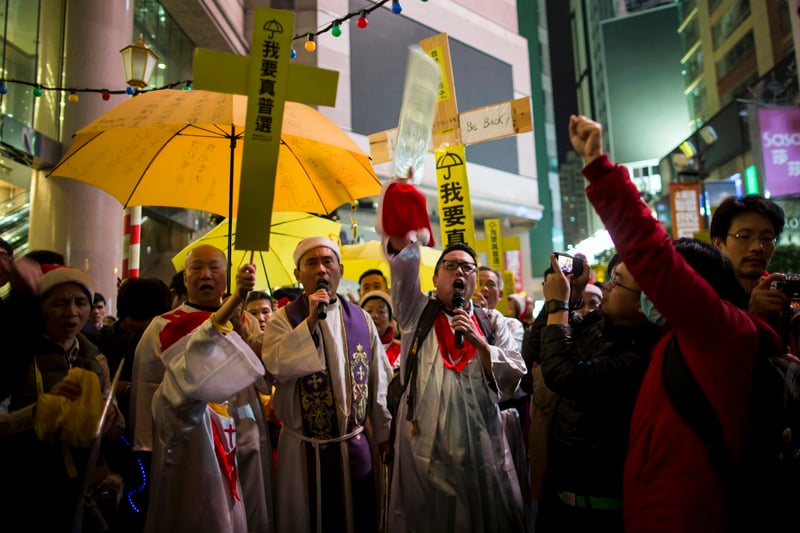 Pro-democracy protesters from a politically active Christian church hold up yellow umbrellas, a symbol of the Occupy Central civil disobedience movement, as they sing Christmas carols at Times Square in Hong Kong early on Dec. 25, 2014. Photo courtesy of REUTERS/Tyrone Siu
*Editors: This photo may only be republished with RNS-CHINA-CHRISTIANS, originally transmitted on March 8, 2016.

But what cannot be disputed is the budding friction between the state and Chinese Christians: Over the past two years, Chinese authorities — citing building code violations — have torn down more than 1,200 crosses from churches across the country, destroyed several churches, and rounded up Christian activists.

There has been some resistance. Chinese Christians in Zhejiang either rebuilt or replaced some of those crosses after the authorities tore down the originals, and other worshippers hung small crosses outside the windows of their homes or from car mirrors.

Against this backdrop of alleged persecution and violence, Chinese Christians and government leaders eye each other warily, both sides unsure of what the future of Christianity in the Middle Kingdom might be.

Missionaries brought Christianity to China’s shores as early as the 7th century.

Much like the entrepreneurs that followed, European and American missionaries were irresistibly drawn to the hundreds of millions of potential converts.

Missionaries were successful in spreading the gospel far from the port cities of Shanghai and Tianjin, and deep into mainland China.

The creation of the People’s Republic of China in 1949, though, gave rise to sweeping religious repression throughout the country. From 1966 to 1979, during the so-called Cultural Revolution, the Communists shut down all churches, mosques and temples.

But in 1979 when Mao Zedong’s successor, Deng Xiaoping, steered the Chinese economy away from socialism and toward the free market, he also ushered in other freedoms and people were granted some religious autonomy.

The Communist Party released a document in 1982 stating that there were about 3 million Protestants in China, but the number of Christians rose significantly over the following decades.

A 2010 Pew research report claimed there were 68 million Christians in China. That number is expected to grow to 70 million by 2050, a modest increase. Other estimates suggest somewhere between 100 and 130 million by 2050.

This growth of Christianity is a source of alarm for Chinese authorities, according to Fenggang Yang, a professor of sociology at Purdue University, and one of the world’s foremost experts on religion in China. Yang projects that if “modest” growth rates are sustained, China could have as many as 160 million Christians by 2025 and 247 million by 2032.

The Chinese authorities “are afraid of losing control,” Yang said. “Many Christians do show a level of independence from government interference. This worries officials. They want to find some way to maintain control, and sinicization is the latest effort to tame Christianity through a more systematic campaign.”

Yang notes that the push to sinicize Christianity manifests in different ways, such as church buildings being constructed in a traditional Chinese style, the music in church services sounding more Chinese, and preachers using Chinese stories in their sermons.

But he believes the most important aspect of the current campaign is to make sure Christian churches are politically aligned with the current government, and are not spreading subversive ideas from outside China’s borders — an idea he finds preposterous.

Xi Lian, professor of World Christianity at Duke University, suggests the tension between Chinese Christians and the Chinese government is a relatively new phenomenon.

“The tension has arisen because of the hostility of the state toward all forms of religion — not just Christianity — that do not subject themselves to government control and domination,” Lian said.

China has been accused by various human rights organizations of brutally repressing the Uighurs, a Muslim ethnic minority group in western China.

If Chinese authorities do, indeed, fear the rise of a robust, defiant Christianity in China, they should think carefully about the strategy they use to address it, warned Lian.

He thinks Christianity is “here to stay,” and that its membership and influence will only expand.

“The harsher the state’s treatment of Christianity, the more vigorously and unpredictably it will grow,” he said.

Something to believe in

Fear of the state’s intentions hasn’t trickled down to Chinese Christians.

Caleb Peng is a self-proclaimed “proud son of Holy God.” The 37-year-old insurance broker comes from a Christian family, and goes to a Protestant church in Beijing each week.

Peng is from a town in southern China, and it was there that he was introduced to Christianity by an uncle. Over the course of several years, Peng’s parents and siblings all converted to Christianity. 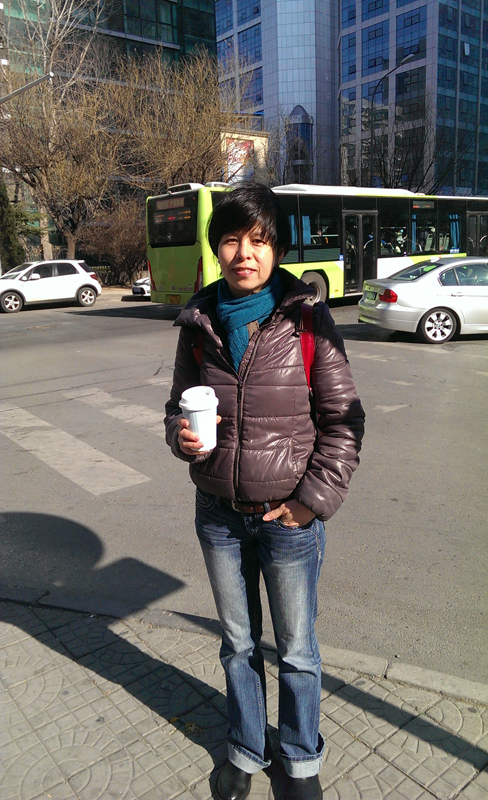 Amy Huang is a Christian teacher in Beijing. She says that Chinese people are “looking for something to believe in other than communism.” Religion News Service photo by Matt Moir

Peng says many people “still don’t accept Christianity because it’s a ‘foreign religion,’” but he doesn’t feel he needs to hide his faith.

“Most of my friends are nonbelievers, but they respect my religion. It’s OK for most Christians in China. I think,” he said.

“People in China are lost,” says the 47-year-old Beijing resident. “They’re looking for something to believe in other than Communism.”

Huang says she spent years exploring different religions and, after a brief exploration of Buddhism, she was baptized in 2000. She has since converted her mother to Christianity, too.

Huang says she recognizes that the government sees religion as a rival, and that it is likely to become increasingly protective of its power as Christianity grows in popularity. But she doesn’t consider the Chinese government a threat to Christianity.

She simply feels that there is little the Communist Party can do to limit Christianity’s growth.

“Christianity will continue to grow in China and I don’t think the authorities can stop it because the appetite is there,” she said. “Communism lets too many people down.”

(Matt Moir is a reporter based in Beijing)