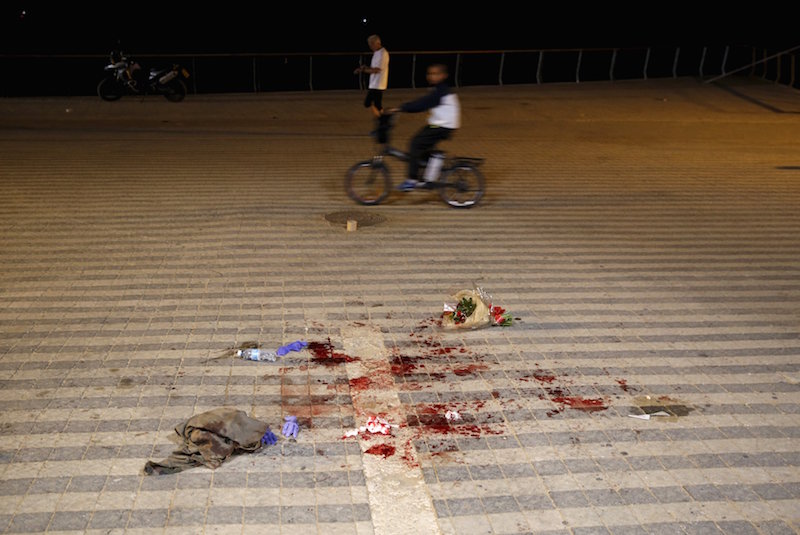 A boy rides past blood stains where, according to Israeli police spokesperson, at least 10 Israelis were stabbed, in the popular Jaffa port area of Tel Aviv, Israel on March 8, 2016. Photo courtesy of REUTERS/Amir Cohen
March 9, 2016
Gregg Zoroya 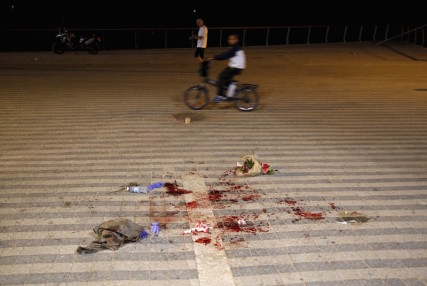 A boy rides past bloodstains where, according to an Israeli police spokesperson, at least 10 Israelis were stabbed, in the popular Jaffa port area of Tel Aviv, Israel, on March 8, 2016. Photo courtesy of REUTERS/Amir Cohen

(USA Today) A wave of attacks in Israel has left a Vanderbilt University graduate student dead in the port city of Jaffa, stabbed to death not far from where Vice President Biden was meeting with former Israeli president Shimon Peres, according to police and media reports.

Vanderbilt University in Nashville identified the victim as Taylor Force, a student at the school's Owen Graduate School of Management.

"Taylor embarked on this trip to expand his understanding of global entrepreneurship and also to share his insights and knowledge with start-ups in Israel," Vanderbilt Chancellor Nicholas Zeppos said in a statement Tuesday (March 8).

"He exemplified the spirit of discovery, learning and service that is the hallmark of our wonderful Owen community. This horrific act of violence has robbed our Vanderbilt family of a young hopeful and all the bright promise for bettering our greater world."

The incident prompted widespread offers of condolence from the international community.

"On behalf of the people of Israel, I send my condolences to Taylor's family and friends," Netanyahu posted. "May his memory be a blessing."

Said John Kirby, spokesman for the State Department, "The United States condemns in the strongest possible terms today’s outrageous terrorist attacks in Jaffa, Petah Tikvah, and Jerusalem, which tragically claimed the life of U.S. citizen Taylor Allen Force and left many others severely injured. We offer our heartfelt condolences to the family and friends of Taylor and all those affected by these senseless attacks, and we wish a speedy recovery for the injured."

Kirby added, "As we have said many times, there is absolutely no justification for terrorism. We continue to encourage all parties to take affirmative steps to reduce tensions and restore calm."

Force earned his bachelor's degree from the United States Military Academy at West Point and served as a field artillery officer in the Army from 2009 to 2014, according to this profile on the LinkedIn social media site. A spokesman for Vanderbilt confirmed the profile was Force's.

Israeli police spokesman Mickey Rosenfeld, while not releasing the name, did confirm that the victim was an American citizen who was stabbed in a knife attack that left 10 other people wounded.

The attacker, who was identified as a Palestinian, was shot and killed, Rosenfeld said. The school said that all other Vanderbilt students, faculty and staff on the trip are safe.

The violence in Jaffa was part of a series of attacks Tuesday that included a shooting in Jerusalem where two police officers suffered serious gunshots wounds before the assailant wielding an automatic weapon was shot and killed by border police, Rosenfeld said. That incident occurred near the Damascus gate in Jerusalem's Old City, the police spokesman said. There was also a separate knife attack in Jerusalem by a woman who was shot to death by police.

Biden's office issued a statement Tuesday that condemned the attacks in Jaffa. Biden expressed "his sorrow at the tragic loss of American life and offered his condolences to the family of the American citizen murdered," the statement said.

Force was the second American killed in Israel in recent weeks. A 21-year-old off-duty Israeli soldier died in a knife attack on the West Bank in February. The soldier, Tuvya Weisman, held dual U.S.-Israeli citizenship.

An ongoing series of knife attacks, car rammings and shootings date back to September when they were believed to have been triggered by tensions over a sensitive holy site in the Old City. At least 28 Israelis and 176 Palestinians have been killed, according to the Associated Press.

(USA Today with reporting from The Tennessean)