A still image taken from security camera footage shows people running for safety as shots are fired at the beach resort in Grand Bassam, Ivory Coast March 13, 2016. REUTERS/Etoile du Sud Hotel via Reuters TV ATTENTION EDITORS - THIS PICTURE WAS PROVIDED BY A THIRD PARTY. REUTERS IS UNABLE TO INDEPENDENTLY VERIFY THE AUTHENTICITY, CONTENT, LOCATION OR DATE OF THIS IMAGE. FOR EDITORIAL USE ONLY. NOT FOR SALE FOR MARKETING OR ADVERTISING CAMPAIGNS. THIS PICTURE IS DISTRIBUTED EXACTLY AS RECEIVED BY REUTERS, AS A SERVICE TO CLIENTS. - RTX294R6
March 14, 2016
Reuters 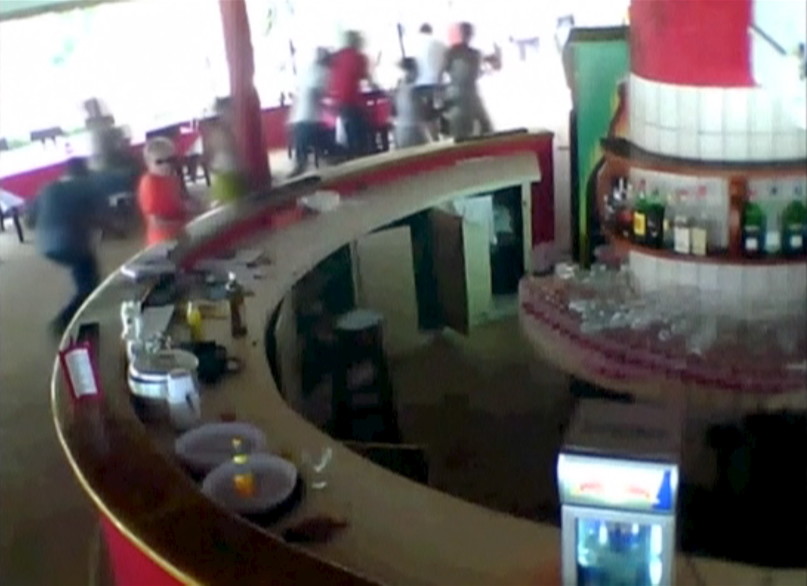 A still image taken from security camera footage shows people running for safety as shots are fired at the beach resort in Grand Bassam, Ivory Coast March 13, 2016. REUTERS/Etoile du Sud Hotel via Reuters TV ATTENTION EDITORS - THIS PICTURE WAS PROVIDED BY A THIRD PARTY. REUTERS IS UNABLE TO INDEPENDENTLY VERIFY THE AUTHENTICITY, CONTENT, LOCATION OR DATE OF THIS IMAGE. FOR EDITORIAL USE ONLY. NOT FOR SALE FOR MARKETING OR ADVERTISING CAMPAIGNS. THIS PICTURE IS DISTRIBUTED EXACTLY AS RECEIVED BY REUTERS, AS A SERVICE TO CLIENTS. - RTX294R6

Sunday's raid, details of which are beginning to emerge in witness and official accounts, was the furthest yet from al Qaeda in the Islamic Maghreb's (AQIM) traditional desert base, a worrying indication of the militants' growing reach.

The attack raised questions about Ivory Coast's preparedness for such an attack, with some asking why such a sensitive target was left so vulnerable.

Fifteen civilians and three members of the special forces were killed and 33 people were wounded in the attack in Grand Bassam, a weekend retreat popular with Ivorians and westerners about 40 km (25 miles) east of the commercial capital Abidjan.

Interior Minister Hamed Bakayoko said another 26 wounded were still receiving medical attention on Monday, as President Alassane Ouattara declared three days of mourning for the country, which has never before been hit by al Qaeda.

Three militants also died in the attack on the resort town, a UNESCO heritage site of crumbling colonial-era buildings.

Witness Christian Eddy said four men arrived in a Ford saloon car at the beachside bar where he works around noon on Sunday. While two remained outside, the two others entered and drank beers for around a half hour.

They then launched the attack.

"They didn't speak French. They spoke Arabic. We communicated with them in English .... The guys who were still outside started shooting and the two seated at the table yelled 'Allahu Akbar' and flipped over the table," he told Reuters.

He said the first victim was a boy who was made to kneel before he was shot. Bar staff tried to warn a deaf boy who was playing nearby.

"People were yelling 'Come over here!' But he didn't know what was happening and just went down to the water. They shot him in the water," Eddy said.

The gunmen then moved up the beach, continuing their killing spree and entering several seaside hotels.

TRENDING STORY: Political turmoil is a ‘cancer’ on US society, says Chicago archbishop

Surveillance footage from Hotel Etoile du Sud - one of the attackers' first targets where two people including a German woman and a Lebanese man were gunned down - showed the initial panic in the hotel bar as the first shots rang out.

Staff crouched and then fled along with customers, among them parents carrying babies or leading young children by the hand.

A man, apparently disguised as a waiter in a red waistcoat over a white dress shirt, entered with a rifle, fired at the empty bar and disappeared behind it, where the Lebanese man had been hiding. More gunshots were then heard.

The first police officers arrived on the scene around 15 minutes after the shooting began, witnesses said. It would be another half hour before special units from the security forces arrived from Abidjan.

Among the dead was Henrike Grohs, 51, head of the Abidjan branch of Germany's Goethe Institut cultural body.

France's President Francois Hollande said four French nationals were killed in the attack. The French government had earlier said just one of its citizens had died.

The attack is a heavy blow for Ivory Coast, which has recovered from more than a decade of political turmoil and a 2011 civil war to become one of the world's fastest growing economies.

President Ouattara won a landslide election victory in October, promising to attract foreign investment to the largest economy in French-speaking West Africa which is also the world's top cocoa producer.

AQIM has spread across the Sahara from Algeria and now operates in much of western and northern Africa.

Since those attacks, Ivorian authorities have increased security around hotels and shopping malls in Abidjan, a city of around five million inhabitants. But there were few signs that was the case in Grand Bassam ahead of Sunday's attack.

"Attacking Bassam was the easiest thing for them to do. Bassam is where all the expatriates and middle class from Abidjan gather on the weekends," said one longtime resident, who said he had seen no sign of recent security improvements.

"We don't understand why this wasn't considered a priority for protection. It would be easy," he said, asking not to be named.

The recent attacks in the region are generally viewed as targeting France and its allies after Paris intervened militarily in Mali in 2013 to drive out al Qaeda-linked militants who had seized the desert north a year earlier.

The attack in Grand Bassam, thousands of kilometers from al Qaeda's traditional operational zones, raises fears over where they might strike next. It poses serious security questions for former regional colonial power France, which has thousands of citizens and troops in the region.

France has 3,500 troops in the region, from Senegal in the far west to Chad. A French military base in Abidjan, manned by around 800 soldiers, serves as a logistical hub for regional operations against Islamist militancy in the Sahel.

(Reporting by By Joe Bavier)