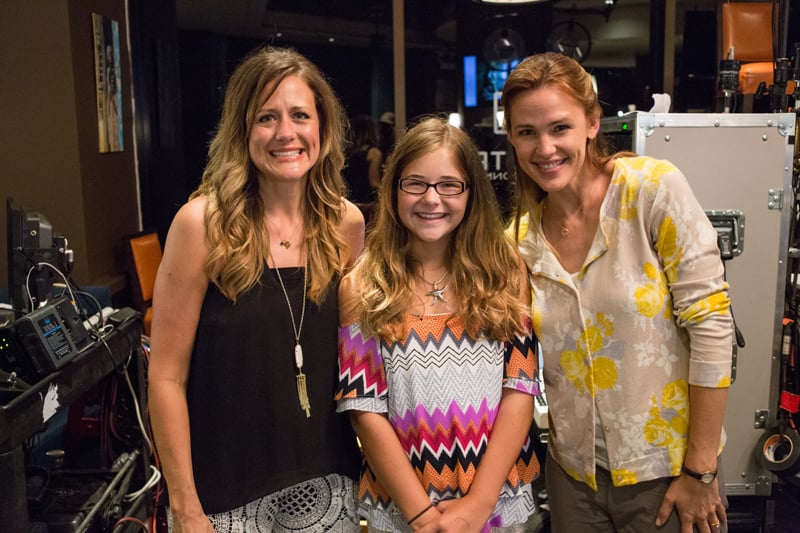 (RNS) “Miracles From Heaven” finished its first weekend in the No. 3 spot at the box office, bringing in $1.9 million on opening day and, more important to Christy Beam,  a message of “hope and encouragement” to its audiences.

Beam is the real-life mom played in the film by Jennifer Garner. And “Miracles From Heaven” shares her family’s story: how her middle daughter, Annabel, was diagnosed with an incurable digestive disorder, how the 10-year-old fell three stories into an old, hollowed out tree and how — spoiler alert — she experienced a miraculous healing.

The Christian mom of three, who lives with her family in Texas, shared how truth is sometimes stranger than fiction, what not to say to those struggling with illness and what it’s like to have Garner play you in a movie.

Q: So how much of the movie is true, and how much is artistic license?

A: They adapted it from my book, “Miracles From Heaven.” That is the true story. It’s the blood, sweat and tears poured out onto the page. Most of the events (in the movie) are very true; they’ve just taken a little dramatic license with them.

In the book and in the real story, Annabel doesn’t come out of the tree unconscious. She actually assisted in her own rescue, which was very crazy because she was nonresponsive for a very long time. Things like that were different, but the heartbeat and the message and those type of things that we want people to walk away with are spot-on.

Q: At the start of the movie, your character says, “When I was growing up, people didn’t really talk about miracles.” Is that true to your experience? How has your faith and your understanding of miracles changed?

A: I believed in miracles. I knew they happened. I knew that God was a miraculous God and an amazing God. But I just never thought they would happen to me. I’m just an ordinary person living an ordinary life. God can use anyone, and I knew that, but for some reason, I never ever thought he would use me or my family.

Q: Also in the film, several church members tell your character they believe some sin was preventing your daughter from being healed. Did people say things like this to you when your daughter was sick, and how can people better support those around them who are going through something like this?

A: Yes, they told us we were out of the will of God and that we had sinned — that we were being tested by God and how well we did determined whether we passed the test and would be granted a miracle. I think, honestly, people mean well, but they don’t really grasp that’s not who God is.

I honestly feel like we, as people, are the extension and the arms of Christ, loving on each other. It is literally Christ reaching down and loving us through other people, wrapping his arms around us through other people. People would say, “Can I bring you dinner?” “Can I help with the girls?” I would say, “No, no, no, I’ve got it. Thank you.” It just became — people said, “You know what? I’m going to bring you dinner,” or, “I’m going to see what I can do with the other girls while you take Annabel to Boston this time” — people just doing it and not making a big deal about it or just simply saying, “I’m praying for you.” Things like that are great ways we can help each other in times of crisis.

Q: How did you go from book to movie, and what has that been like to see your family’s story in theaters?

A: It’s the fastest book-to-screen in cinema history. We were giving the manuscript to the publisher while I was answering calls and emails on the script. My desire for what I wanted to see on film and resonate with people matched (producer DeVon Franklin’s) exactly, and so I knew it was going to be OK. I knew it was a God thing.

Q: Jennifer Garner told the “Today” show that the movie encouraged her to re-engage in the church and give her children a solid faith background. Could you ever have imagined this?

A: I’m just so grateful that someone of Jennifer’s caliber and skill and ability felt so compelled to do this role, and she didn’t just do it as a job, she stayed up and read the script and read the book and said she immediately fell in love with our family and our journey.

What’s so weird about it is she did such an amazing job, my husband and friends have said she even mastered my cadence of speech and she mastered my mannerisms. She just got it, and it’s so crazy to see it on the screen.

Q: What are you hoping people will take away from it?

A: Every day I get 100 messages from people all over the world. It is resonating with them and resonating deeply. It’s a message of hope and inspiration, and they are feeling encouraged. The message of the film is there are miracles around you daily; all you have to do is look up. In your time of trial, in your time of challenge, look up. Be that miracle for someone else.