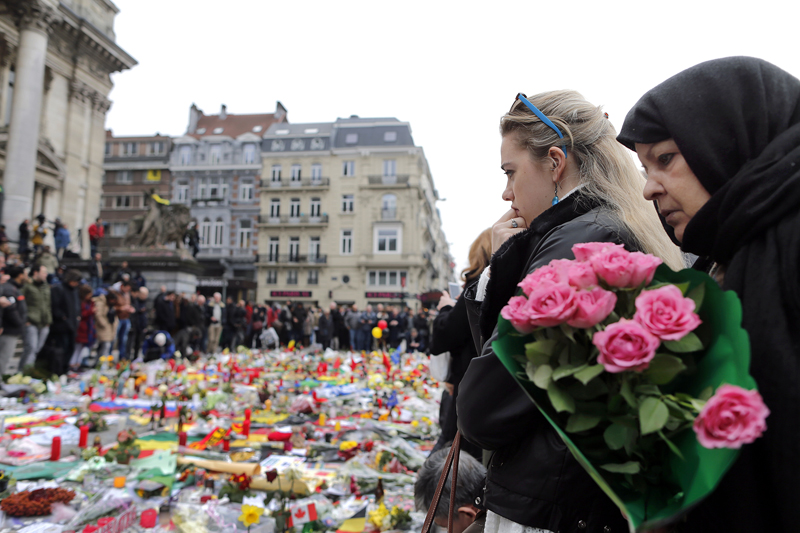 People observe a minute of silence at a street memorial to victims of Tuesdays’s bombings in Brussels, Belgium, on March 24, 2016. Photo courtesy of REUTERS/Christian Hartmann

(RNS) Daesh (the preferred Arabic name for the group that calls itself the Islamic State) has attacked Turkey five times since October, leaving nearly 200 dead and hundreds injured.

In the recent Brussels attack, Daesh killed dozens and injured many more. The loss of human life is a tragedy. The perpetrators are generally male youth, demonstrating another tragedy — horribly wasted human potential. The world repeatedly witnesses people younger than 30, people with so much to live for, throwing their lives away and taking so many others with them.

Daesh knows that over the past 15 years, an entire generation of Muslim American youth has grown up in a society where the youths’ faith is constantly attacked by politicians, strangers and television shows.

RELATED STORY: French woman who escaped ISIS lives to tell about its horrors

This rearing, among other things such as a lack of religious education, leads to disaffected youth. A 2015 YouGov survey showed that only 52 percent of Muslim Americans believe Islam always requires loyalty to one’s country of residence. Meanwhile, 18 percent of Muslim Americans did not agree or declined to answer when asked whether Islam condemns every form of terrorism. This lack of understanding one’s faith can lead to horribly wasted human potential. Islam is clear that loyalty to one’s country of residence is part of faith and that terrorism has no place in Islam.

Alternatively, a 2014 Pew Report showed that 60 percent of Americans do not know a Muslim. It’s no wonder Islamophobia has risen so rapidly in America. People fear what they do not know. Despite their polar differences, these two groups, the disaffected youth and Americans with no Muslim connections, have one glaring similarity: ignorance about Islam.

The ignorance revolves around common misconceptions, including what Islam says about religious freedom, jihad and women’s rights. If followers of groups such as Daesh read the Quran, they would see it clearly says that there is no compulsion in religion. If they researched jihad, they would see it is a struggle each person has within himself or herself. If they studied how Prophet Muhammad treated women, then they would stop enslaving and raping women and raise women to a higher status.

This is why the Ahmadiyya Muslim Community, USA, launched the True Islam and the Extremists campaign. The True Islam campaign is a nonsectarian effort that clarifies 11 misconceptions extremists use to brainwash people — like those cited in the previous paragraph. To date, thousands of Muslims and non-Muslims have endorsed the campaign. The True Islam effort is a response to President Obama’s call in December for Muslims to unite against extremism and his message in his final State of the Union that we are one family.

To be one family, all should work to learn about each other. This can be inviting Muslim neighbors to your house of worship to answer questions about Islam, hosting blood drives with Muslims in honor of the 9/11 victims or simply breaking bread together. Through these efforts, non-Muslims can befriend Muslims and learn about each other from each other. This is the solution to returning disaffected youth to the mainstream.

The only way to overpower an ideology of a fringe is with the ideology of the Prophet Muhammad. His was a teaching of love, compassion and resilience through prayers. Muslims must unite under this example to reject the ideologies of Wahhabis, Salafists and Maududis. These ultraconservative schools of thought — whose influence has spread far beyond their origins on the Saudi peninsula — are part of the reason some Muslims become extremists. They have been brainwashed to believe a violent Islam is a true Islam. Fixing the root of the problem will be difficult because most people do not have access to reach the root. Instead, most people have the ability to change minds at the grass-roots level. This method has incredible human potential. After all, changing minds will not be done by passing laws, but by winning the hearts.

(Salaam Bhatti is spokesman for the Ahmadiyya Muslim Community, USA, and is an attorney in New York)