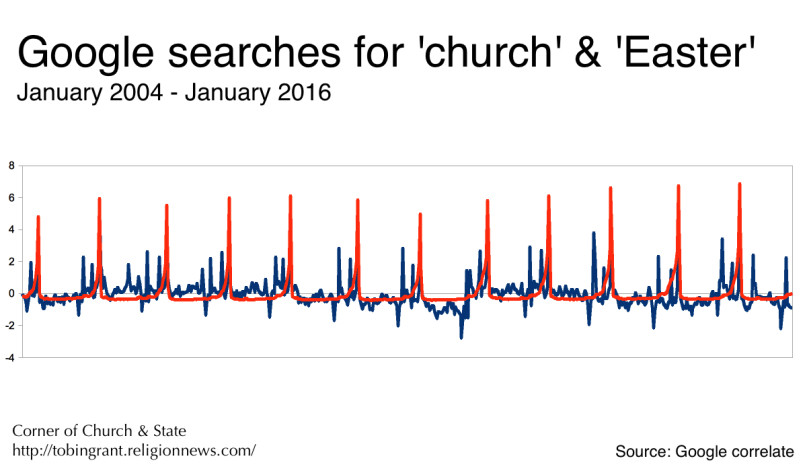 This graphic is not offered for republication

Google and other search engines give us a window into what people want to know. If this week is like previous Easter weeks, then a lot of Christians will be looking for when and where to go to church.

Using Google Correlate, I tracked weekly Google searches for the word “church” for every week from 2004 through the start of 2016. While searches for church remains steady during most of the year, searches spike during three weeks.

Each of these weeks is important, particularly for churches that follow the Western liturgical calendar.

The graph compares searches for “church” with searches for “Easter.” The two are correlated, with the highest spikes in church services happening during Easter weeks.

Not surprisingly, the search for churches during these weeks is correlated with searches for “Lutheran church” and “Catholic church,” both of which emphasize these holidays.

We seem similar spikes around Easter for searches for “Methodist” and “Presbyterian.” People search for these churches also around Christmas but not for Ash Wednesday.

The pattern is different for evangelicals and other churches that do not follow a liturgical calendar. Baptist-focused searches increase a bit around Easter, less so near Christmas. Searches also increase at the end of August, perhaps because this is when many Baptist churches have “Promotion Sunday,” the day indicating that children move up to the next grade level in their Sunday School classes. The day is often seen as the beginning of the “year” in many churches.

Note: This post is an update of earlier posts on Google searches with a completely new graph based on Google Correlate.