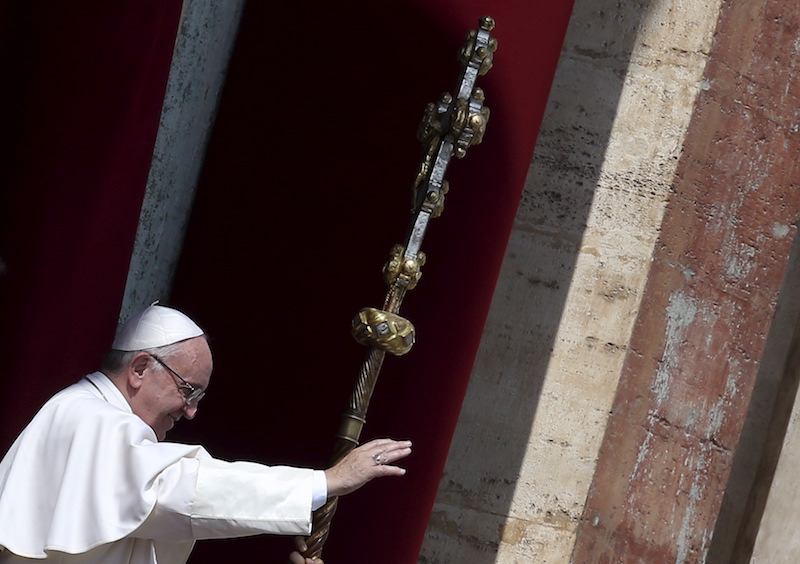 Pope Francis gestures during the delivery of the Urbi et Orbi benediction at the end of the Easter Mass in Saint Peter’s Square at the Vatican March 27, 2016. Photo courtesy REUTERS/Alessandro Bianchi

VATICAN CITY (RNS) Pope Francis made an emotional appeal for global peace during his traditional “Urbi et Orbi” (to the city and the world) Easter blessing, urging people to remember victims of the “blind and brutal violence” in recent terrorist attacks, such as last week’s Brussels bombings that killed dozens of people.

Throughout, he emphasized a key theme of his pontificate: mercy.

Speaking from the balcony of St. Peter’s Basilica amid tight security, the pope said mercy and “weapons of love” were the only answer to “hatred and death” as he reflected on the world’s violent hotspots.

“The Lord Jesus by his resurrection triumphed over evil and sin,” Francis said. “May he draw us closer on this Easter feast to the victims of terrorism, that blind and brutal form of violence which continues to shed innocent blood in different parts of the world, as in recent attacks in Belgium, Turkey, Nigeria, Chad, Cameroon, and the Ivory Coast.”

“Before the spiritual and moral abysses of mankind, before the chasms that open up in hearts and provoke hatred and death, only an infinite mercy can bring us salvation,” the pope said. 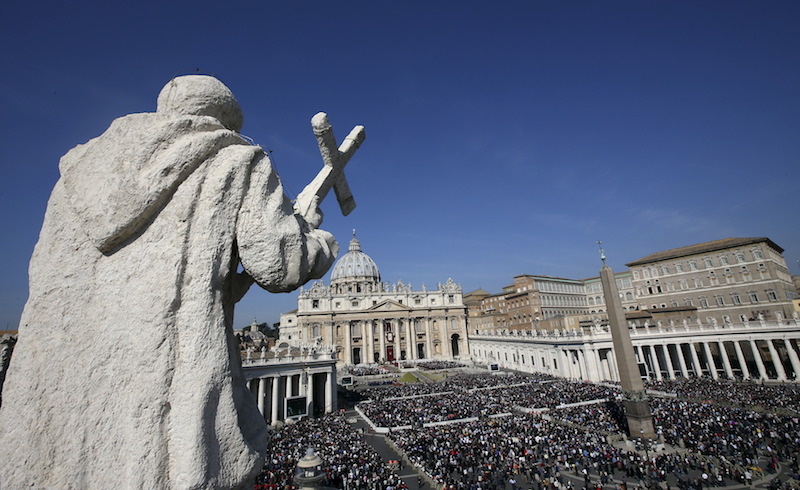 The pontiff singled out the conflict in Syria for special attention, and expressed hope that the latest round of negotiations could bring an end to the war’s “destruction, death, contempt for humanitarian law and breakdown of civil coexistence.”

“We trust the talks now underway, that goodwill and the co-operation of all will bring peace,” Francis said.

The pontiff urged people in the Mediterranean and the Middle East to “overcome their hardened hearts” and to promote peace in Iraq, Yemen and Libya as well as a solution to the war in Ukraine.

The pope called for lasting peace between Israelis and Palestinians in the Holy Land, urging patience and openness through “direct and sincere negotiations.”

LOOK: Stations of the Cross in a Mexico City prison (PHOTOS)

Earlier on Sunday (March 27), the pope expressed his sympathy for the victims of Friday’s suicide attack in Iraq that killed dozens of people at a football stadium south of the capital, Baghdad.

In his Easter address the pope called for compassion for the poor and marginalized and appealed to humanity not to forget refugees fleeing war, hunger and poverty.

“All too often, these brothers and sisters of ours meet along the way with death or, in any event, rejection by those who could offer them welcome and assistance,” he said. He also remembered those affected by climate change and what he called greedy exploitation of the planet as he said droughts and floods often led to food crises in different parts of the world.

Before delivering his Urbi et Orbi message, the pope celebrated Easter Mass in St. Peter’s Square under brilliant skies. Thousands of people in the square erupted in loud cheers and screams when Francis blessed them as he was driven around in his popemobile.

Italian media reports said 2,000 police officers and other security officials were patrolling the area around the Vatican and tourist sites in Rome.