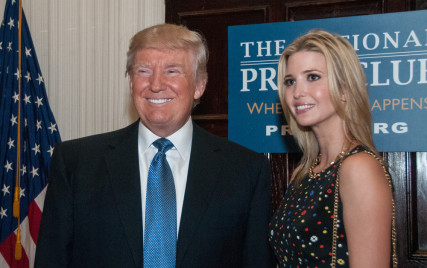 Mazal tov, Ivanka and Jared Kushner, on the birth of your new son!

Whatever we might think of Donald Trump, the least problematic thing about him is that he has Jewish grandchildren.

Ivanka Trump Kushner is a Jew (no: not a “convert”). She takes Judaism seriously. The birth of this child brings another Jewish child into the world — and for a beleaguered, shrinking people, this is enough reason to rejoice.

In the words of the traditional blessing for newborns: “As you have brought your child into the covenant of Abraham and Sarah, may you also bring your child to the study of Torah, to the wedding canopy, and teach him acts of goodness.”

The Kushner children are going to attend a Jewish day school — the famous Ramaz school at KJ in Manhattan.

They will attend Shabbat morning services.

At the end of the Torah service, there is a prayer for the government, asking God’s protection over those who govern, as well as their counselors and advisors.

The prayer for the government stems from the prophet Jeremiah’s counsel to the Jewish exiles in Babylonia: “Seek the welfare of the city to which I have exiled you and pray to the LORD in its behalf; for in its prosperity you shall prosper.” (Jeremiah 29:7).

Translation: be good citizens, wherever you might find yourselves.

It also stems from the admonition in Pirkei Avot, the ethical maxims of the ancient sages: “Pray for the welfare of the government. If it were not for the fear of the government, each man would eat his neighbor alive.’”

Translation: a ruler — even a bad ruler — is preferable to anarchy, which brings civic and moral chaos.

Sometimes, the prayer for the government in the liturgy is rather generic; it is just for whomever happens to be the ruler.

Sometimes, the prayer is quite specific. In Great Britain, Jews pray for “our Lady, Queen Elizabeth, and the royal family.” Years ago, when the Soviet Union was still in power, I prayed in a Moscow synagogue and heard a prayer “for the welfare of the Supreme Soviet.” I have heard Cuban Jews praying for the health and welfare of Fidel Castro.

I first encountered this prayer during the High Holy Days when I was in college, right after Watergate.  When the rabbi asked God’s blessings on “the president and his counselors and advisors,” my father turned to me and grumbled audibly: “I am not going to ask God’s blessing for Haldeman and Ehrlichman!”

But that’s the point, actually.

We did pray for Nixon and his cronies, even though they were, well, scoundrels. The prayer for the government has never depended on one’s particular feelings about those in power.

Criticize rulers all you want to (and to the extent possible) — yes. That is what the prophets did, famously, and what Jews have always done throughout history.

But when you come to synagogue, you ask God to protect them. Because you know that without a strong central government, as the ancient sages put it, we would eat each other alive.

To me, it is similar to the holiest moment of the American civic year — that moment when the President enters for the State of the Union address, and everyone rises, and you know that many of the people who have risen to welcome him wish that someone else was walking in. It doesn’t matter. It’s the office, not the individual, that really matters.

The Trump grandchildren will go to services, and they will hear that prayer for the government. It will be on behalf of whomever happens to be in the White House at that time.

This is what troubled me about what happened at AIPAC last week, when Donald Trump publicly insulted President Obama — twice.

But then, people stood up to applaud. That moment was so disconcerting that the AIPAC leadership, tearfully, apologized to the 18,000 delegates the next morning — especially because they had repeatedly asked for civility.

Many AIPAC delegates are serious, even observant Jews. That means that they are in synagogue for the Torah reading, and they hear the prayer for the government. They should know that the prayer for national leaders is agnostic about who is the leader at that time.

Those who cheered the insult to a sitting President — no matter what they think about that president — should have known better. They should have carried their Jewish values into the Verizon Center.

The problem of secularization is simply this: Here and now, I am “Jewish.”

But outside this context — like the synagogue during services — I really don’t have to take Jewish ideals and values into account. Because I have entered what we sometimes call “the real world,” where politics overrides our deepest spiritual values. This is my total disconnect.

In Jonathan Sarna’s essay, he offers us this small tidbit.

It turns out that at times, the prayer for the government even extended to a prayer for “the Muslims who live in our country.”