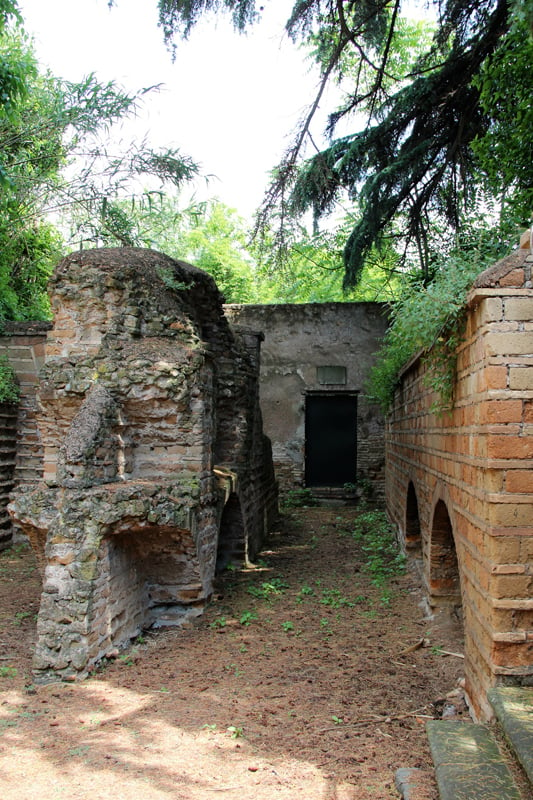 Exterior view of the Jewish Catacombs that date back to 2nd century AD near the Appian Way in Rome. Religion News Service photo by Josephine McKenna
March 29, 2016
Josephine McKenna

Exterior view of the Jewish catacombs that date back to the second century A.D. near the Appian Way in Rome. Religion News Service photo by Josephine McKenna

ROME (RNS) Beneath a former vineyard near the legendary Appian Way lies one of the Italian capital’s untold secrets, a vast underground catacomb where Jews buried their dead nearly 2,000 years ago.

While Rome has more than 40 Christian catacombs, which attract hundreds of thousands of tourists every year, there are only a handful of Jewish catacombs and they are usually open to small groups and private tours.

Now the Jewish catacombs of Villa Randanini will open to the public from May 1 to June 5 as one of several initiatives by the Italian cultural ministry to broaden the scope of Pope Francis’ Jubilee Year of Mercy.

Giorgia Calo, cultural councilor for the Jewish Community of Rome, on Tuesday (March 29) welcomed the move to highlight Jewish history in Italy, saying that Jews “have always been a part of the history of the capital.”

The Jewish catacombs, like the Christian ones, lie outside the walls that once encircled ancient Rome.

Discovered beneath the vineyard of Villa Randanini in 1859, the Jewish burial site consists of a labyrinth of tunnels that stretches for nearly 200,000 square feet at a depth of 15 to 50 feet beneath the surface.

READ: Poll: Only 50 percent of Italians call themselves Catholic 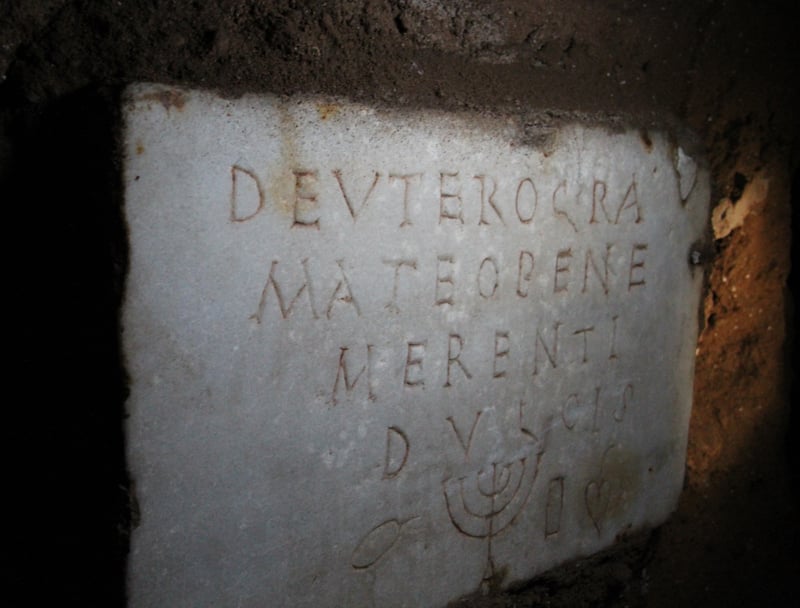 A grave marker inside the Jewish catacombs in Rome with a depiction of a menorah. Religion News Service photo by Josephine McKenna

Visitors can see inscriptions in Hebrew, Greek and Latin, which give clues about an individual’s family connections, status or line of work. While the catacombs have been sacked over the centuries, visitors can still see many colorful frescoes and tablets with depictions of the traditional Jewish candelabra.

The walls of family “cubicles” or tombs are covered in dancing maidens, birds, grapevines and floral tributes, and there are also pockets of kokhim, a type of Jewish burial chambers.

The catacombs were included in 20 cultural itineraries unveiled by Dario Franceschini, Italy’s cultural minister, to mark the Jubilee Year.

Those itineraries, he said, were “the product of an extraordinary collaboration” that showed how fundamental culture was for affirming integration, coexistence and dialogue.

Imam Yahya Pallavicini,  vice president of Italy’s Islamic Community, also attended the minister’s launch. He said the concept of mercy in the pope’s Jubilee initiative exists in both Jewish and Muslim doctrine and presented an opportunity to consider what they had in common.

The government announcement came as Venice marks the 500th anniversary of the Jewish Ghetto. 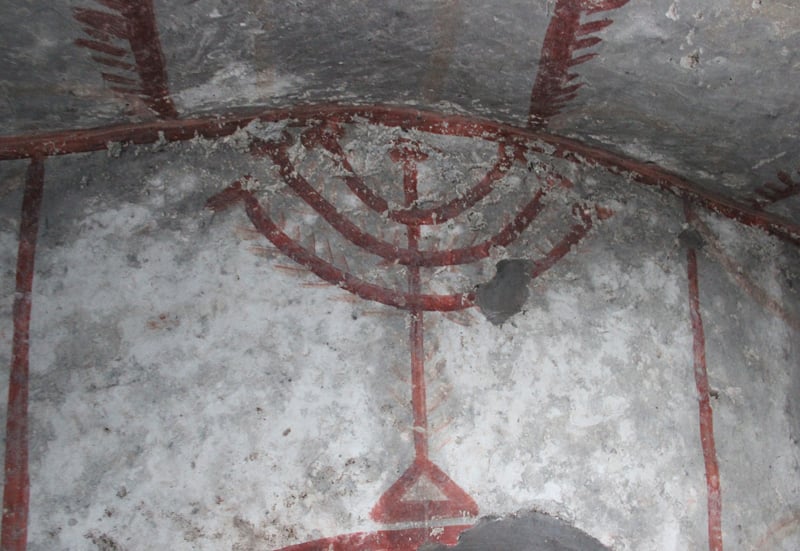 Fresco of a menorah inside the Jewish catacombs on the outskirts of Rome, believed to date back to the second century A.D. Religion News Service photo by Josephine McKenna

The Rome itineraries include a visit to the remains of a synagogue in the ancient port of Ostia Antica, south of the Italian capital, and a tour of the Roman Forum’s Arch of Titus, which graphically records the Romans’ sacking of Jerusalem in the year 70.

"We have tried to create a suitable itinerary to help people understand how much the Jewish people have been part of Rome," said Calo.

Close to the Jewish catacombs are the Christian catacombs of St. Callixtus, which are among the most extensive in Rome. The second-century tombs are part of a huge burial complex. Sixteen popes and many Christian martyrs were once buried there.