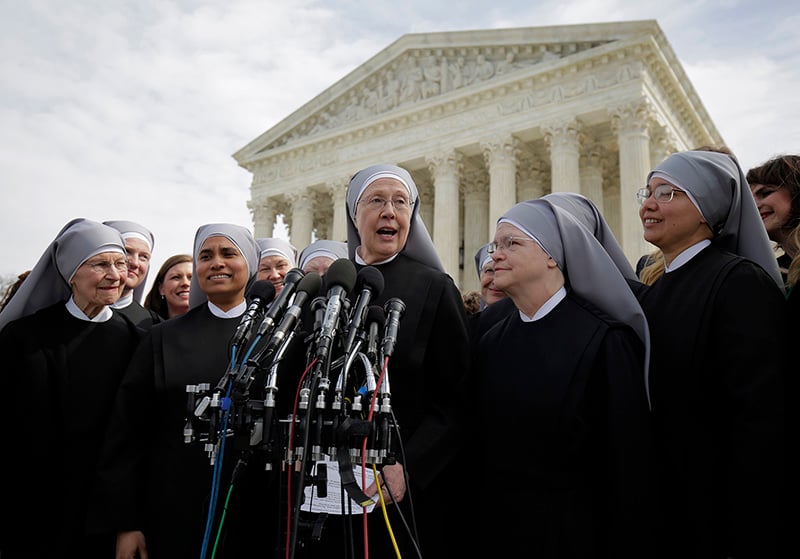 Sister Loraine McGuire with Little Sisters of the Poor speaks to the media after Zubik v. Burwell, an appeal brought by Christian groups demanding full exemption from the requirement to provide insurance covering contraception under the Affordable Care Act, was heard by the U.S. Supreme Court in Washington on March 23, 2016. Photo courtesy of REUTERS/Joshua Roberts
*Editors: This photo may only be republished with RNS-SCOTUS-CONTRACEPTION, originally transmitted on March 23, 2016.

WASHINGTON — The Supreme Court are seeking a compromise that would let religious nonprofit groups avoid any involvement in offering insurance coverage for contraceptives while also ensuring that employees get the coverage.

On Tuesday (March 29) the justices asked lawyers on both sides in seven cases, which were heard last week, to submit additional briefs on the subject within the next few weeks.

It was a clear indication that at least one member of the court — most likely Justice Anthony Kennedy — is seeking a way out of yet another 4-4 decision that would set no national precedent. The high court has issued two such divided opinions in the past eight days following Justice Antonin Scalia’s death last month.

“The parties are directed to address whether contraceptive coverage could be provided to petitioners’ employees, through petitioners’ insurance companies, without any such notice from petitioners,” the order read.

The cases, including one filed by the Little Sisters of the Poor, test whether religiously-affiliated employers such as charities, hospitals and universities must file a form or write a letter to get out of offering free coverage for birth control. The groups say even that level of involvement violates their religious beliefs.

“This is an excellent development. Clearly the Supreme Court understood the Sisters’ concern that the government’s current scheme forces them to violate their religion,” said Mark Rienzi, lead attorney for the Becket Fund for Religious Liberty. “We look forward to offering alternatives that protect the Little Sisters’ religious liberty while allowing the government to meet its stated goals.”

If the compromise floated by the high court provides enough cover for the non-profits, it also would represent a victory for the government and advocates of reproductive rights, because workers would get free coverage once the regulation is revised.

The eight justices appeared equally divided during oral arguments last week, raising the likelihood that they would deadlock over the challenge by religious non-profits to the federal government’s so-called ‘contraceptive mandate,’ which grew out of the Affordable Care Act.

The court already has split 4-4 in two cases, including a major challenge to public employee unions’ ability to collect fees from non-members, which was decided Tuesday. In the birth control case, a similar split would be particularly embarrassing; federal appeals courts are divided on the issue, with most upholding the government mandate but one siding with the religious groups.

The justices could decide to hear the case again when they are back to full strength — but with President Obama and Senate Republicans at loggerheads over the nomination of federal appeals court Judge Merrick Garland, that could take another year or more.

The two-page order from the court Tuesday outlined a possible solution that would, in essence, suggest a different accommodation than the one the Obama administration devised and turn the justices into policymakers.

“Petitioners would have no legal obligation to provide such contraceptive coverage, would not pay for such coverage, and would not be required to submit any separate notice to their insurer, to the federal government, or to their employees,” the order said.