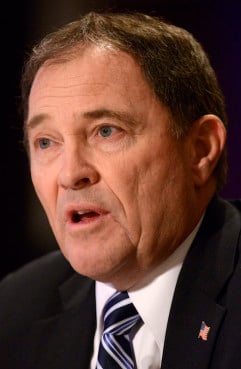 (Reuters) — Utah’s governor has signed a bill requiring doctors to administer anesthesia to women receiving an abortion at the 20th week of gestation, his office said.

The bill, the first of its kind in the nation, according to The Salt Lake Tribune, states that an anesthetic or analgesic will “eliminate or alleviate organic pain to the unborn child.”

“The governor is adamantly pro-life. He believes in not only erring on the side of life, but also minimizing any pain that may be caused to an unborn child,” a spokesman for Republican Gov. Gary Herbert said in a statement.

Supporters of the bill and anti-abortion rights groups say that around the 20th week of pregnancy a fetus can feel physical pain, and anesthesia can eliminate discomfort.

Reproductive health advocates, including Planned Parenthood of Utah, told the Tribune the position is scientifically unproven and lawmakers have inserted politics into a private medical matter.

Under the new law, doctors performing abortions would be required to administer anesthesia to women seeking an elective abortion around 20 weeks. Previous state law gave women the choice whether or not to opt for anesthesia.

Abortions are prohibited in Utah after the point when the fetus is viable, which is around 22 weeks.

The law will not affect a large number of women, the Tribune reported, with 17 women in Utah receiving abortions at 20 weeks of pregnancy or later in 2014, it said.

Republican state Sen. Curt Bramble, who sponsored the bill, had originally wanted to ban abortions after 20 weeks but was told the move would be unconstitutional, the Tribune reported.