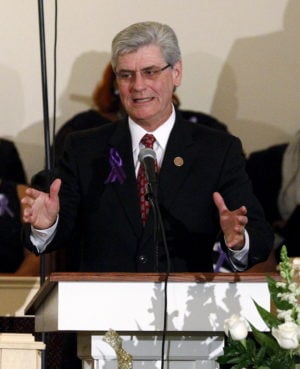 (Reuters) – A Mississippi measure that would allow people with religious objections to deny wedding services to same-sex couples and provide wide protections for actions decried as discriminatory by gay rights advocates passed the state legislature on Friday.

Opponents plan a last-ditch attempt to stop the legislation on Monday before it heads to Mississippi Republican Governor Phil Bryant, whose spokesman said he would decide whether to sign or veto it after a thorough review.

Bryant previously said he did not consider the bill discriminatory, according to WLOX television in Mississippi.

A new law barring transgender people in North Carolina from choosing bathrooms consistent with their gender identity has drawn wide protest, while the governors of Georgia and Virginia vetoed similar “religious liberty” bills this week.

Representative Andy Gipson, a Republican sponsor of the Mississippi measure, urged his colleagues on Friday not to be intimidated by national media criticism. He highlighted a poll that showed wide support for the measure in the state.

“It’s time that we stand up and do the work of the people and protect the freedoms that they enjoy,” he said.

The bill includes provisions that go beyond same-sex marriages, according to the Human Rights Campaign, a national gay rights advocacy group that has labeled the act appalling.

“We urge Governor Bryant to do the right thing – reject discrimination, and veto this harmful measure when it reaches his desk,” said HRC President Chad Griffin earlier this week.

The legislation would allow employers to cite religious conviction in determining workplace policies on dress code, grooming and bathroom and locker access.

Foster parents would be protected in placing lesbian, gay or transgender children into controversial programs seeking to change their sexual orientation, said Ben Needham, director of HRC’s “Project One America” to expand lesbian, gay, bisexual and transgender rights in the U.S. South.

He said the legislation could also permit discrimination against single mothers, for example, byreligious-affiliated organizations such as homeless shelters and food pantries.

Additionally, state court clerks could seek to be recused from providing marriage licenses to same-sex couples.

Some of Mississippi’s large employers, such as Nissan North America and MGM Resorts International, have spoken out against legislation that would discriminate.