I need your help figuring out this analogy. I’m not sure if this a terribly failed attempt at an analogy, or if I’ve lost my grasp of logic and history.

Covering religion and politics is fun, but there’s a cost: I read a lot of kookie arguments. Activists from both left and right, secular and fundamentalist often make arguments that are (at best) illogical. Sometimes they are so mind-bending that I question my hold on reality and rationality. This is one of those times. 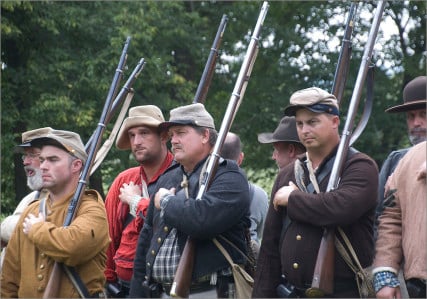 North Carolina enacted a law prohibiting local LGBT protections, including allowing access to public bathrooms based on gender identity. As a result, there has been a backlash including New York and Connecticut have cut off state-funded travel to North Carolina and PayPal halting their new headquarters in Charlotte.

Family Action Council of Tennessee’s David Fowler compared the situation to a “New Civil War” (or as he refers to it throughout his post “The War Between the States”). No analogy is perfect, but I’m not grasping this one.

The key moral issue in 1861 and today surrounds the question of what it means to be human: are we all created in the image of God? Here’s the connection to today:

“Even as some states thought slavery was a moral wrong of such gravity that fellow states should be prohibited from having policies that protected or institutionalized that moral wrong, it appears that at least New York and Connecticut think belief in certain biological and sexual realities is so wrong that no state should be allowed to have policies that reflect those realities.”

I have a hunch that Governor Cuomo probably agrees with this statement, but not the way the author intended. Is the point that denying access to bathrooms is a fundamental moral issue like slavery in which there is right and wrong, or is the argument that slavery, like bathroom access, only seems like a moral issue but is really just a matter of opinion (and certainly not one that should be imposed on the South)?

Fowler questions his own analogy, but, again, for reasons I can’t quite grasp.

In 1861, “opponents of slavery could at least point to some standard that transcended all states.” In this case, however, “liberal governors in New York and Connecticut…would reject the use of any transcendent laws or principles that may be found in the Bible by which to judge human laws.”

“In New York, we believe that all people – regardless of their gender identity or sexual orientation – deserve the same rights and protections under the law,” said Governor Cuomo in a statement.

Governor Dannel Malloy said in statement, “When we see discrimination and injustice, we have to act.  This law is not just wrong, it poses a public safety risk to Connecticut residents traveling through North Carolina…This law endangers the welfare not just of North Carolina’s citizens, but of all people visiting that state.”

It’s not a list of Bible verses, but when I read references to equality, justice, and safety I don’t conclude that they “reject the use of any transcendent laws or principles that may be found in the Bible.”

Fine. We can agree to disagree on that. Let’s say that this is a new  War Between the States. How will the South win? According to Fowler, it may resolve itself if those who don’t like things in the South stay up north and out west and leave the South alone. Those who don’t want to impose their values on the South are welcome, but the rest can stay home.

Right, because that’s how things have resolved themselves before?

To summarize: The new  War Between the States is New York firing the first shot on a southern state. As with slavery, it’s a northern state who thinks its moral position is so universal that the southern state must follow along except that, like in 1861, this position is relative and not really a moral issue that rises to the level of some states trying to impose their morality on other states.

Maybe the best analogy is to Godwin’s Law.  This “law” states that given enough comments on the internet, eventually someone will compare the issue to Hitler and the Nazis. This post by Fowler is the southern conservative version: any disagreement with a southern state law will be compared to the  War Between the States.

The better arguments surrounding North Carolina’s law and the backlash stay away from comparisons to slavery, war, and such. There are disagreements about important values, but we’re not going to resolve the disagreements with analogies stretched and twisted like taffy.