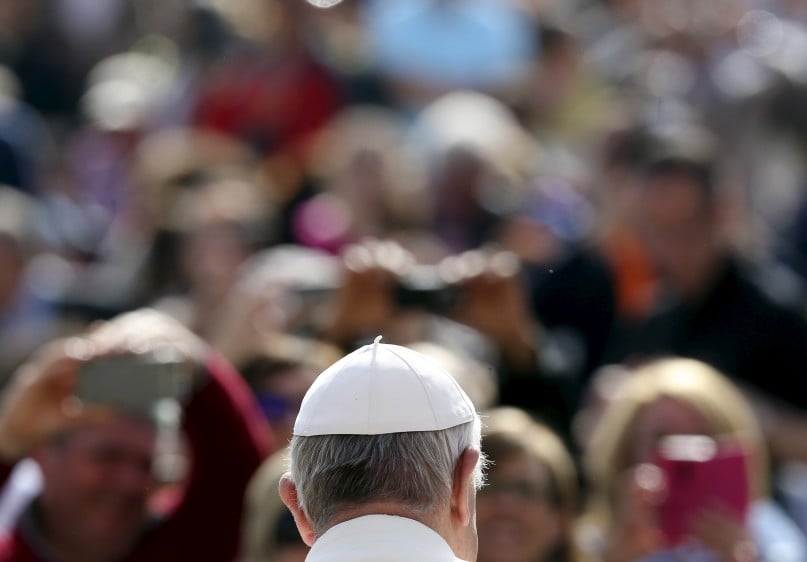 Pope Francis arrives to lead the weekly audience in St. Peter’s Square at the Vatican on April 6, 2016. REUTERS/Alessandro Bianchi

VATICAN CITY (RNS) The wide-ranging papal document on the Catholic Church and modern-day families that the Vatican released on Friday (April 8) was expected to be the culmination of a two-year gantlet of unusually frank discussions — a chance for Pope Francis to finally settle the fierce debates, and even dark warnings of schism, that his effort to open dialogue on contentious topics had unleashed.

With so much at stake, various camps were eager to parse every phrase to see if they had won, or lost, on a particular point and, as expected, the verdict on the document, a 263-page papal exhortation, titled “Amoris Laetitia,” or “The Joy of Love,” was mixed.

The hopes of some in the liberal camp that the pontiff might soften Catholic doctrine on marriage and divorce, or somehow signal an approval of same-sex unions, were always unrealistic; indeed, many progressives expressed disappointment in the exhortation even as Francis’ stress on pastoral flexibility over theological rigidity signaled a fundamental reorientation of Catholicism away from a rule-based focus.

That reaffirmation of long-standing doctrine on marriage was at least some consolation to the vocal number of conservatives who long feared the kind of unambiguous changes that the progressives hoped for, though many winced at several other elements, such as the openings Francis left for the divorced and remarried to take Communion.

But the larger reality conveyed by the document — and one that could unsettle Catholic traditionalists more than anything — is that the pope clearly wants the debates over church teachings and pastoral practices to continue and, perhaps, to continue to evolve.

Francis signaled as much early on in “The Joy of Love,” a landmark document that is essentially the pope’s extended spin on a series of high-level meetings of leading cardinals and bishops that he launched in February 2014 and that concluded with an intense, three-week synod of bishops in Rome last October.

“The complexity of the issues that arose revealed the need for continued open discussion of a number of doctrinal, moral, spiritual, and pastoral questions,” Francis wrote.

He said that “honest, realistic and creative” thinking by pastors and theologians “will help us to achieve greater clarity,” and he rejected both “an immoderate desire for total change without sufficient reflection or grounding” and a hard-line “attitude that would solve everything by applying general rules or deriving undue conclusions from particular theological considerations.”

Francis also endorsed a kind of “local option” on ministry, stressing that pastors in each country or region “can seek solutions better suited to its culture and sensitive to its traditions and local needs.”

“I would make it clear,” he wrote, “that not all discussions of doctrinal, moral or pastoral issues need to be settled by interventions of the magisterium. Unity of teaching and practice is certainly necessary in the church, but this does not preclude various ways of interpreting some aspects of that teaching or drawing certain consequences from it.”

In other words, don’t look to Rome for the solution to every challenge, and don’t stop looking for ways to welcome anyone and everyone who feels alienated from the faith because their personal lives do not conform to the Catholic ideal.

No family is perfect, Francis says, and the church itself has much to learn from those families as it accompanies them through their difficulties.

Just as important, Francis in this exhortation repeatedly emphasizes the primacy of individual conscience and the ability of sincere believers to discern — with the help of a pastor and through their own experience — whether they are able, for example, to take Communion if they are divorced and remarried.

Conscience is for many a wild card in Catholic theology, a concept that critics say allows for a perilously high chance of moral freelancing.

But Francis says the concept is vital, and has been ignored by too many for too long.

Church leaders, he wrote, “find it hard to make room for the consciences of the faithful, who very often respond as best they can to the Gospel amid their limitations, and are capable of carrying out their own discernment in complex situations.”

“We have been called to form consciences, not to replace them.”

That is certainly not the clarion call that the Catholic right wanted to hear.

“(I)t is precisely the pope’s studied ambiguity that many find stimulating, and others exasperating,” Thomas Williams, a conservative theologian and former priest who left the clergy to marry, wrote in a prebuttal to the exhortation.

“People inside and outside the church have always admired the clarity of her teachings,” Williams wrote on the Catholic news site Crux. “Agree or disagree, at least you knew where she stood, yet this hasn’t always been the case with Francis.”

Yet others would in fact see Francis’ nuanced approach as precisely in keeping with the church’s tradition of developing doctrine over time in the light of changing historical realities, and the gradual movement — guided by the Holy Spirit — “towards the entire truth,” as Francis put it.

Cardinal Walter Kasper, a retired German theologian who has provided some of the intellectual framework for Francis’ focus on mercy over condemnation, likes to say that Francis “does not want to get short-term results.”

“He does not want to occupy positions,” the 83-year-old Kasper has written, “but wants to put processes into motion and create a dynamic that will bear fruit at the right time.”

That is a formula some will welcome, and others will reject. But it certainly points to greater ferment in the church, not less.

To be sure, exactly where doctrine and pastoral practice might be headed under Francis — and beyond him — isn’t clear, and it’s not at all obvious that any eventual changes will please liberals who are feeling disappointed today.

But the engagement with faith is essential to Francis’ vision for the church. “We make the path by walking,” the pope likes to say.

If that journey is part of the pilgrimage of faith, it is far from over. In fact, it may never be over.