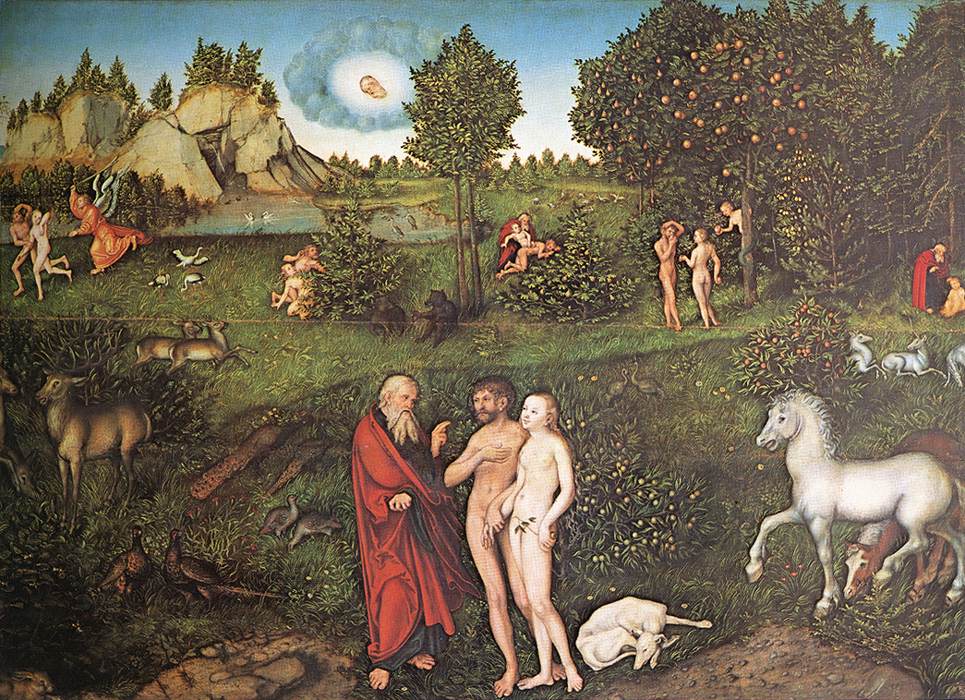 Adam and Eve, by Lucas Cranach

In his long-awaited Apostolic Exhortation on the family, Pope Francis makes it possible for Catholics who are divorced and remarried to licitly receive communion. The exhortation, Amoris Laetitia ("Love's Delight"), follows in the footsteps of Eastern Orthodoxy, which teaches that the human condition is such that accommodations must be found for those unable to live up to the highest Christian standards.

In Chapter 8, Francis begins by quoting the report of the 2014 session of the bishops' Synod on the Family that "although the Church realizes that any breach of the marriage bond 'is against the will of God,' she is also 'conscious of the frailty of many of her children.'" He then proceeds to build on Pope John Paul II's concept of a "law of gradualness," glossing it as "'not a gradualness of law' but rather a gradualness in the prudential exercise of free acts on the part of subjects who are not in a position to understand, appreciate, or fully carry out the objective demands of the law."

Step three is a quote from the Synod's final report: "Consequently, there is a need 'to avoid judgements which do not take into account the complexity of various situations' and 'to be attentive, by necessity, to how people experience distress because of their condition.'" After a walk through different ways that marital relationships fall short of the ideal (including divorce and remarriage), Francis declares (paragraph 300) that "the immense variety of concrete situations such as those" precludes the promulgation of "new set of general rules, canonical in nature and applicable to all cases." But with respect to the existing set of rules -- and here's where the rubber hits the road -- "the consequences or effects of a rule need not necessarily always be the same.336"

What footnote 336 says is: "This is also the case with regard to sacramental discipline, since discernment can recognize that in a particular situation no grave fault exists." Then, in paragraph 305, comes the following:

Because of forms of conditioning and mitigating factors, it is possible that in an objective situation of sin – which may not be subjectively culpable, or fully such – a person can be living in God’s grace, can love and can also grow in the life of grace and charity, while receiving the Church’s help to this end.351

Footnote 351 begins with, "In certain cases, this can include the help of the sacraments," and goes on to quote from Francis' 2013 Apostolic Exhortation Evangelii Gaudium to the effect that the Eucharist "is not a prize for the perfect but a powerful medicine and nourishment for the weak." Get the picture?

Nearly half a century ago, a wise teacher told me that if you want to know what a document from the Vatican is saying, you have to be sure to read the footnotes. Footnotes 336 and 351 add up to formal permission for Catholic bishops and priests -- after a process of discernment --  to let the divorced and remarried receive communion. This is a long way from the full Orthodox doctrine of oikonomia, under which, for example, someone who has been divorced may (penitentially) remarry in church. But with Amoris Laetitia, Francis has definitively moved his church in that direction.