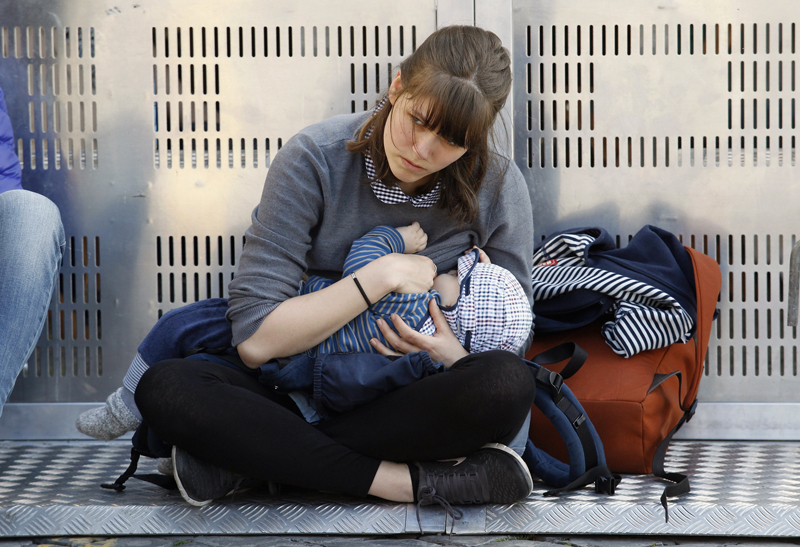 A woman breastfeeds her child as Pope Francis celebrates his inaugural mass in Saint Peter Square at the Vatican on March 19, 2013. Photo courtesy of REUTERS/Giampiero Sposito
*Editors: This photo may only be republished with RNS-WELDON-OPED, originally transmitted on April 11, 2016.

I was sitting in one of the front wooden pews of St. Vincent Ferrer Church, armed with a bag of children’s books and Power Ranger toys. The effort was ambitious — taking three sons under age 7 to an hour-long Sunday Mass — but it was important to me as a single mother in the mid-1990s to indoctrinate them as Catholics in the habit of weekly Mass.

I wanted for them the joy of community and to have fond memories of church for as far back as they could remember. Sunday Mass was where I sat beside my own mother, who often promised to take us all to Baker’s Square for pancakes after mass. I wanted to create traditions like that — if the boys could last until the priest’s declaration, “Mass is ended. Go in peace to love and serve the Lord.”

Midway through 9 a.m. Mass, Father from the pulpit was delivering a homily. He was a fire and brimstone brand of priest. I was hoping the explosion sounds my oldest son was making to accompany his action figure tableau would not disturb the concentration of other parishioners in our row.

“Divorce is selfish,” the elderly priest declared, his face contorted in disdain. “It is a sin to create broken families.”

I could feel the heat rise on the back of my neck and my face flush. I wanted to scream. There was nothing selfish about my divorcing an abusive husband, the father to my sons. It was a brave act. And we were not broken. We were healing.

That Sunday was two decades ago and my sons are grown adults, now 27, 25 and 22. But the stigma splashed on divorced parents and families by the Catholic Church for the past several generations is a legacy of shame and finger pointing, repeated frequently in the rhetoric of broken homes, failure, selfish single parents and sin. And it still stings.

Pope Francis made a leap towards healing that stigma last week in his much awaited 256-page paper, “Amoris Laetitia,” or “The Joy of Love,” with a softened approach to divorce and remarriage. “Let us remember that a small step in the midst of great human limitations can be more pleasing to God than a life which appears outwardly in order but moves through the day without confronting great difficulties,” Francis wrote.

It is comforting language, but hardly revolutionary.

His efforts to address the nuances of human relationships fail to acknowledge the complexities of marriages that end and why, or marriages that never begin. It is a blatant failure, as well, to hold to the church’s hard-line opposition to same sex marriages. Francis’ recent pronouncement does not erase the embedded hurt that has been caused by decades of punitive references to families that do not fit the happy family mold of one father, one mother.

In 2014, according to U.S. Census Bureau data, 1.6 million children were born to unmarried women, or 40 percent of all births.  More than a third of children under 18 in this country live in households with a single parent.

These families are not broken.

Just as the Catholic Church failed to stem or even acknowledge the horror of abuses caused by priests over the last century until recently, the failure to create new avenues for families of all kinds will continue to fracture the beliefs of Catholics in this country in their papal leadership. 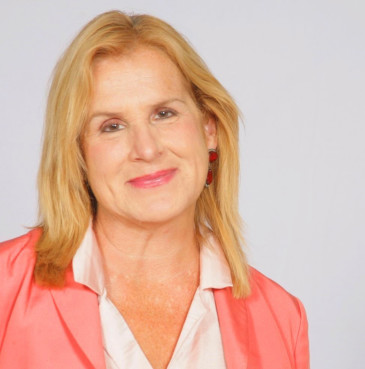 Michele Weldon is emerita faculty at Northwestern University and a senior leader with The OpEd Project. Her latest book, Escape Points, deals with raising her sons alone. Follow her on Twitter @micheleweldon. Photo by Karen Kring, courtesy of Michele Weldon

I was divorced in 1996, and received an annulment that same year. I went through the process because my mother and the parish priest told me I needed to. I remember it involved a hefty payment, hours of meetings with an assigned counselor and a dissertation-worthy set of paperwork outlining the reasons for the annulment. It was granted, but not without a formal protest from my former husband. Ironically, he remarried shortly after our divorce.

Years later, I have no plans to remarry, and I am not sure if I ever will. What I do wish for is an annulment of the pain caused by clergy who in the name of Jesus have declared for years that because I chose to raise my sons alone following a doomed marriage, that we are all broken. That I have sinned.

Bless me, Father, but that is a legacy I find hard to forgive.

(Michele Weldon is emerita faculty at Northwestern University and a senior leader with The OpEd Project. Her latest book, Escape Points, deals with raising her sons alone. Follow her on Twitter @micheleweldon)

Opinion
Ordination in Jerusalem belies slow progress for Christian women in the Middle East
Follow us on Facebook!
Submit your photos to RNS