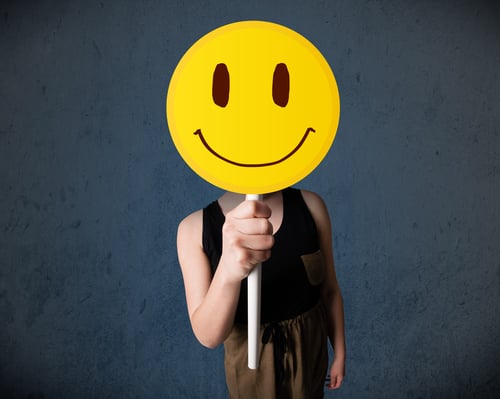 A new Pew Research survey finds highly religious people are happier than others.

(RNS) Look around. Three in 10 people you see claim they are pretty satisfied with life, happy, healthy and moral, too.

They’re the “highly religious,” 30 percent of U.S. adults who say they pray daily and attend church at least once a week.

“Religion in Everyday Life,” a new survey from Pew Research released Tuesday (April 12), teases out the particular ways they differ from the majority of U.S. Christians who are less observant and from non-Christians, including the “nones” who claim no religious identity.

The highly religious are overwhelmingly (95 percent) Protestant, Catholic or other Christians. Nearly half (49 percent) are white evangelicals. Most of the overall group (62 percent) are women.

And many are smiling. Four in 10 highly religious people say they’re “very happy” with the way things are going in life, compared to 29 percent of those who are not highly religious.

But, “we don’t know why they are happier“ or more satisfied with their health, said Pew researcher Besheer Mohamed, a co-author of the report.

“We see the patterns but we don’t know what is causing what. Is it that regular churchgoers get something from the church practice and involvement or is it that a certain sort of person is more likely to go to worship more frequently?” he said.

And 47 percent say they gather with extended family at least monthly (compared to 30 percent of those not highly religious).

The less religious may also be prayerful folks who attend worship less frequently or people with no religious affiliation who value moral behavior. The report points out that many say “attributes such as gratitude, forgiveness and honesty are essential” to what being religious or moral means to them personally.

Still, the survey finds many similarities in beliefs and behavior between the two groups.

Rather than consult a pastor or priest, 82 percent of the highly religious and less religious rely on their own research when making important decisions; 45 percent turn to prayer and personal reflection; 43 percent to family; 25 percent to professional experts; but only 15 percent to religious leaders.

“It’s the age of Google and consulting your own conscience or Aunt Susie,” said Boston University professor of sociology Nancy Ammerman, an adviser to Pew on the research.

Believers don’t act on their faith in the marketplace.

Fewer than 30 percent, highly religious or not, and across all traditions, say they pay attention to a company’s environmental record or to whether it pays fair wages before making purchases. Bringing religious views to economic choices “is still very low no matter where you look,” she said.

Couch potatoes are “very satisfied with their health.”

The highly religious also admit they overeat about as often, and don’t exercise much more than the seven in 10 Americans whose everyday lives are less shaped by religiosity. 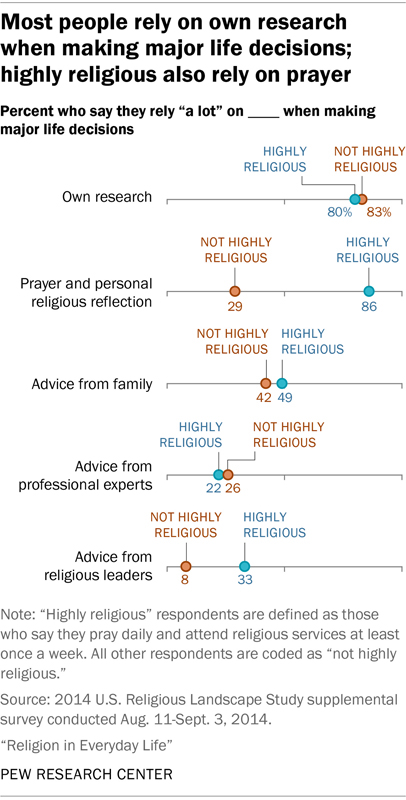 Pew also asked people about what they saw as the essentials of their faith or philosophy.

According to the report, “Christians are about equally likely to cite moral behaviors as vital to their Christian identity as they are to mention explicitly religious behaviors.”

Among Christians, the top five of 16 beliefs and behaviors were:

At the bottom: Living a healthy lifestyle and resting on the Sabbath each were cited by only 18 percent. Only 14 percent said being Christian means “buying from companies that pay a fair wage.”

Among the 27 percent who said they were religiously unaffiliated, the top five criteria for a moral life were similar, minus God:

There was one other noteworthy divide between the highly religious and the other 70 percent of Americans.

The most faithful were also more likely to admit that they told a “white lie” in the prior week (45 percent compared to 39 percent among the less religious).

“Maybe they just have a greater sense of introspection or conscience,” said Ammerman. “Maybe they are more empathetic and attuned to other people’s feelings. Or maybe they’re just more willing to tell (that they had lied).”