(RNS) Americans as a whole are growing less religious, but those who still consider themselves to belong to a religion are, on average, just as committed to their faiths as they were in the past — in certain respects even more so.

The 2014 U.S. Religious Landscape Study, released Tuesday (Nov. 3) by the Pew Research Center, also shows that nearly all major religious groups have become more accepting of homosexuality since the first landscape study in 2007. 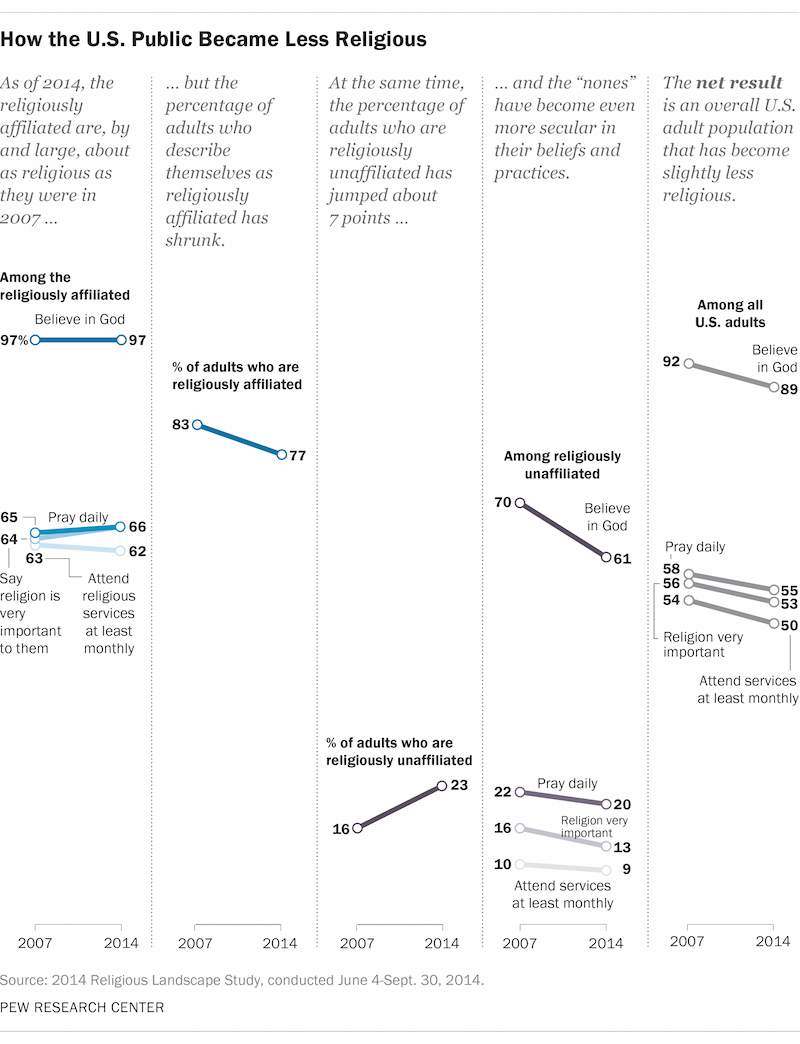 The new study may provide some solace to those who bemoan the undeniable rise in America of the “nones” — people who claim no religious affiliation.

“People who say they have a religion — which is still the vast majority of the population — show no discernible dip in levels of observance,” said Alan Cooperman, director of religion research at Pew.

“We should remember that the United States remains a nation of believers,” said Gregory A. Smith, Pew’s associate director of research, “with nearly 9 in 10 adults saying they believe in God.”

That said, overall, belief in God has ticked down by about 3 percentage points in recent years, driven mainly by growth in the share of “nones” who say they don’t believe in God. But even among Christians — 98 percent of whom say they believe in God — fewer believe with absolute certainty: 80 percent in 2007 compared to 76 percent in 2014.

And now 77 percent of adults surveyed describe themselves as religiously affiliated, a decline from the 83 percent who did so in Pew’s 2007 landscape study.

Pew researchers attribute these drops to the dying off of older believers, and a growing number of millennials — those born between 1981 and 1996 — who claim no religious affiliation.

The researchers also found that as religiosity in America wanes, a more general spirituality is on the rise, with 6 in 10 adults saying they regularly feel a “deep sense of spiritual peace and well-being,” up 7 percentage points since 2007. Also increasing: the number of people who experienced a “deep sense of wonder” about the universe, which also jumped 7 percentage points.

These trends make sense, said Andrew Walsh, a historian of American religion at Trinity College in Hartford, Conn., in that religious affiliation in America today is “increasingly shaped by individual choice and less by inheritance from a family or community.”

Though the current social climate, especially for young adults, allows Americans to choose not to affiliate with a religious institution, Walsh said, many “are still spiritual in some ways.”

One sign: the proliferation of yoga studios throughout the nation. Most enthusiasts of the meditative practice, which combines breathing and physical postures, are not looking to convert to Hinduism, Walsh said, but they may nevertheless find the activity spiritually gratifying.

Cooperman cautioned, however, against concluding that such spirituality is replacing more traditional kinds of religious experiences, such as attending religious services.

“On the contrary, the people in the survey who express the most spirituality are the people who are the most religious in conventional ways,” he said, “and the respondents who are the least attached to traditional religion, including the ‘nones,’ report much lower levels of spiritual experiences.”

More striking numbers in the study describe changing Christian attitudes toward gay Americans. Though the new landscape survey is not the first to document such change, it shows in detail how dramatically members of a broad swath of denominations — even those that officially oppose homosexuality — have shifted in their views.

The number of evangelical Protestants, for example, who said they agreed that “homosexuality should be accepted by society” jumped 10 percentage points between the 2007 and 2014 studies — from 26 percent to 36 percent. The increase for Catholics was even steeper, from 58 percent to 70 percent. For historically black Protestant churches, acceptance jumped from 39 percent to 51 percent.

“Despite attempts to paint religious people as monolithically opposed to LGBT rights, that’s just not the case and these numbers prove that,” said Jay Brown, head of research and education at the Human Rights Campaign Foundation, the national gay rights group.

“There’s growing support of LGBT people and our families, often not in spite of people’s religions but because the very foundation of their faith encourages love, acceptance and support for their fellow human beings,” he said.

The religiously unaffiliated, however, showed the highest rate of acceptance of gay Americans: 83 percent. 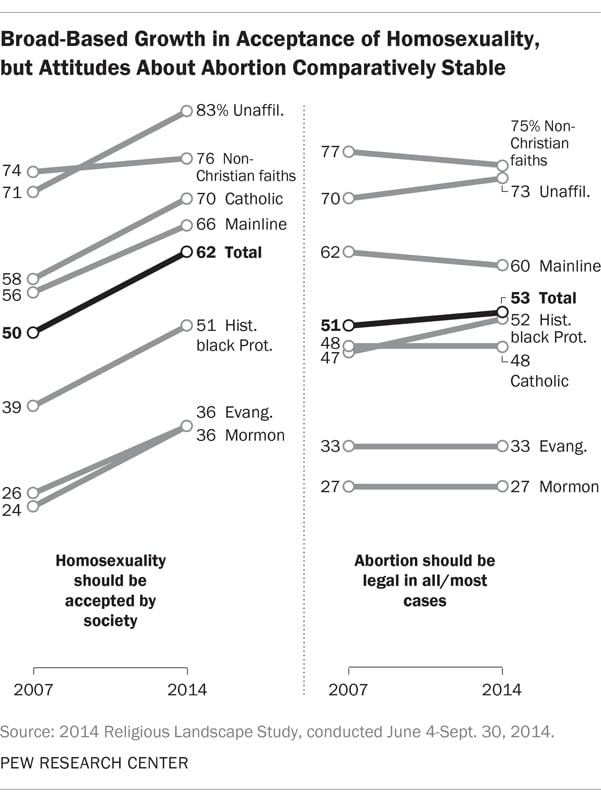 This graph shows views on homosexuality and abortion between 2007 and 2014. Graphic courtesy of Pew Research Center

On abortion, attitudes held steady, as has been the case since the Supreme Court made abortion a constitutional right in 1973. The study shows that 53 percent of Americans believe abortion should be legal in all or most cases, with views within denominations shifting little since the first landscape study.

Other findings from the study include:

The 2014 U.S. Religious Landscape Study interviewed 35,071 Americans, and has a margin of error of plus or minus less than 1 percentage point. The portion of the survey released Tuesday, which focuses on beliefs and practices, is the second of two parts. The first, released in May, found that the nation is significantly less Christian that it was seven years ago.