Schoolchildren look out at the central business district from atop the Kenya International Convention Centre in Nairobi, Kenya, August 25, 2015. Photo courtesy REUTERS/Joe Penney

NAIROBI, Kenya (RNS) Pope Francis’ visit to the Kenyan capital of Nairobi Nov. 25–27 will bring healing and reconciliation to the East African nation that has suffered key setbacks in the recent past, senior bishops here say.

Kenya, a country with 14 million Catholics, recently announced the theme of the papal visit: “Stand firm and be strong.” Organizers expect nearly 1.5 million people to attend the papal Mass on Nov. 26 in Nairobi; there are nearly 4 million Catholics in the Archdiocese of Nairobi.

The encounter with a pope is the cause of major excitement and anticipation in Kenya — the largest country on his Africa tour — but bishops here worry ongoing political strife and ethnic incitement could blight the visit. The Rev. Stephen Okello of Nairobi holds a flag with the Vatican coat of arms. Photo courtesy Fredrick Nzwili

In the last few weeks, Kenyan government and opposition leaders have torn into each other over what is viewed as runaway corruption, greed and mismanagement.

“We declare and demand an honest cease-fire and an end to the incessant name-calling among our politicians,” Bishop Alfred Rotich, chairman of the pope’s visit for the Kenya Conference of Catholic Bishops, said at a news conference Sunday (Nov. 1). 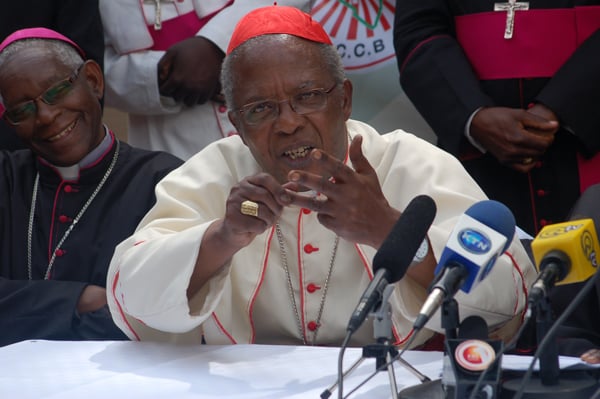 On Saturday Cardinal John Njue, the archbishop of Nairobi, described the visit as a “real blessing” for the church and the nation, which is on the front lines of the expanding Islamist terror group al-Shabab.

Kenya is also yet to recover from the 2007-2008 post-election violence, which left over 1,200 dead and more than 600,000 forced into Internally Displaced Persons camps, known as IDPs. The violence also divided the Kenyan church.

“He is coming to bring a message of peace and hope,” said Njue, adding that he hoped Francis would also speak on other critical issues such as corruption and tribalism.

In an interview, the Rev. Stephen Okello, coordinator of the visit said the post-election violence was one of the biggest setbacks so far and the church was keen to hear the pope’s advice on how to deal with its fallouts.

“We have a lot of suspicion, of division, hatred and there are people in IDP camps, who are constantly reminding us what happened,” said Okello.

Neither church nor state got an opportunity to actively spearhead healing and reconciliation among the people, according to Okello.

“The people have hardened and got used to divisions in tribal lines because our political parties are divided along tribal lines. It is very hard for us to heal under those circumstances,” said Okello. “So the pope is coming to strengthen us.”

For some Kenyan bishops, climate change is an important issue and they hope Francis will also talk about it, given the recent release of his environmental encyclical.

“The worst famines are in Africa; many children and even adults have lost their lives out of hunger and thirst in the last half century,” said Bishop Anthony Muheria of the Diocese of Kitui. “The thirst for Christ that we seek to quench, must also be accompanied by satisfying the human thirst for water, and hunger for real food.”

Meanwhile, Catholic priests who left the church to claim their right to marry want to meet Francis when he visits Kenya.

The priests said they will urge him to make celibacy optional, express their concern about excessive authority of the Africa bishops and seek support for Communion for divorced Catholics.

“We want him to know that celibacy is a reason why the church is losing its members to other denominations,” said Peter Njogu, a former Catholic priest who left to form the Restored Universal Apostolic Church.