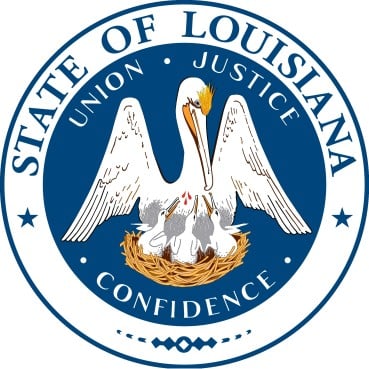 State seal of Louisiana. The Democratic governor broke with the Republican South to sign an order protecting LGBT rights.

(Reuters) – Louisiana Gov. John Bel Edwards signed an anti-discrimination order on Wednesday protecting the rights of gay and transgender people, aligning his state on the liberal side of a political divide playing out across the U.S. South.

The Democrat’s executive order also protects state employees against discrimination based on other criteria including race, religion, disability or age. It bans state agencies from discrimination, while offering an exemption for churches and religious organizations.

Edwards followed two previous Democratic Louisiana governors, Edwin Edwards and Kathleen Blanco, in signing such an order as there is no state law protecting lesbian, gay, bisexual or transgender people from employment discrimination, the governor’s office said in a statement.

“This order is the first time Louisiana has explicitly recognized the equal rights of transgender people, and is a strong stand against bigotry,” the American Civil Liberties Union of Louisiana said in a statement.

Edwards’ order rescinded one signed by his immediate predecessor, Bobby Jindal, a Republican and former 2016 presidential contender, that was part of a movement in some states that seeks to limit same-sex marriage rights in the name of religious freedom and the ability of transgender people to choose which public restrooms they may use.

Edwards said his order was good for business.

“The previous administration’s executive (order) I am rescinding was meant to serve a narrow political agenda,” he said. “It does nothing but divide our state and force the business community, from Louisiana’s smallest businesses to large corporations like IBM, to strongly oppose it.”

A number of measures have pitted equality rights against religious freedoms in state legislatures across the South and other regions.

Laws curtailing LGBT rights have faced criticism from corporate, entertainment and sports leaders, especially a North Carolina law that bars transgender people from using public bathrooms that do not match the sex on their birth certificates.

Similar transgender bills are pending in Kentucky and Tennessee plus Midwestern states Illinois, Minnesota and Missouri, the ACLU said. It added that 17 states banned discrimination based on sexual orientation and gender identity.