(RNS) Emergency teams from U.S. faith-based humanitarian relief agencies are on the ground in northwest Ecuador after the 7.8 magnitude earthquake that took the lives of at least 413 people.

Seven of World Vision’s development programs near the epicenter report no electricity and no running water. The agency said it is setting in motion plans to reach up to 10,000 people in the hardest-hit areas, including Manabi, Esmeraldas and Los Rios, with emergency relief items such as mattresses, mosquito nets, hygiene supplies, kitchen kits and water treatment systems. 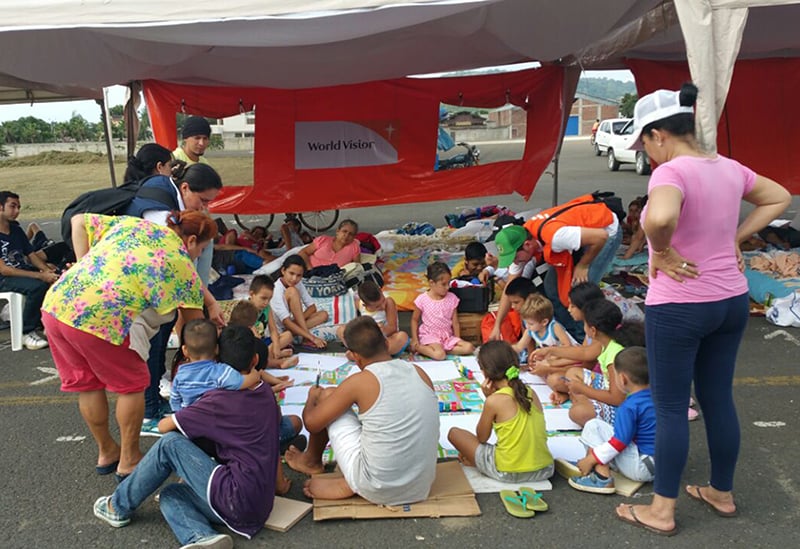 Emergency teams from U.S. faith-based humanitarian relief agencies are on the ground in northwest Ecuador after the 7.8 magnitude earthquake that took the lives of at least 413 people. Pictured here is a “child-safe space” for survivors in Portoviejo. Photo courtesy of Julia Carrion/World Vision

“Right now, our primary concern is ensuring the needs of children and their families are met,” said World Vision’s national director in Ecuador, Jose Luis Ochoa. World Vision is in the process of setting up child-friendly spaces where children and young people can access counselors.

Georgia-based MAP International, which provides medical supplies, said an assessment of critical needs was well underway as of Monday. Maggy Martinez, MAP’s Ecuador country leader, said that in some instances entire towns or villages have been destroyed. She is evaluating the type and amount of medical relief MAP will need to send and is working with other nonprofit partners to coordinate those efforts. Maggy Martinez, MAP’s Ecuador country leader, said that in some instances entire towns or villages have been destroyed. Photo courtesy of MAP International

On Monday in Quito, Protestant churches held a meeting to create an earthquake emergency committee, which MAP has joined alongside organizations such as UNICEF, World Vision, Plan International, Save the Children and CARE.

“My country hasn’t experienced an earthquake like this in years,” said Martinez. “I want to thank (you) for the readiness and willingness to support the profound suffering and sorrow that my country is facing.”

Some people are alive and remain trapped in the quake rubble. According to media reports, rescue workers pulled one survivor from a collapsed hotel 40 hours after the quake.

After rescue and recovery work is completed, relief agencies will provide shelter, relocation and ongoing health care. MAP is using standardized, prepackaged kits of medicines and medical supplies. These are called interagency emergency health kits and are designed to address the health needs of thousands of people displaced by a disaster for up to three months.

North Carolina-based Samaritan’s Purse has deployed a disaster assistance relief team to the quake zone. Spokesman Scott Knuteson said there were plans to dispatch an aircraft with supplies and key personnel.

“We are responding in the name of Jesus Christ to help with emergency needs such as water, shelter and medical care,” Franklin Graham, president of Samaritan’s Purse, said in a statement. Samaritan’s Purse will open up a field hospital in coming days.