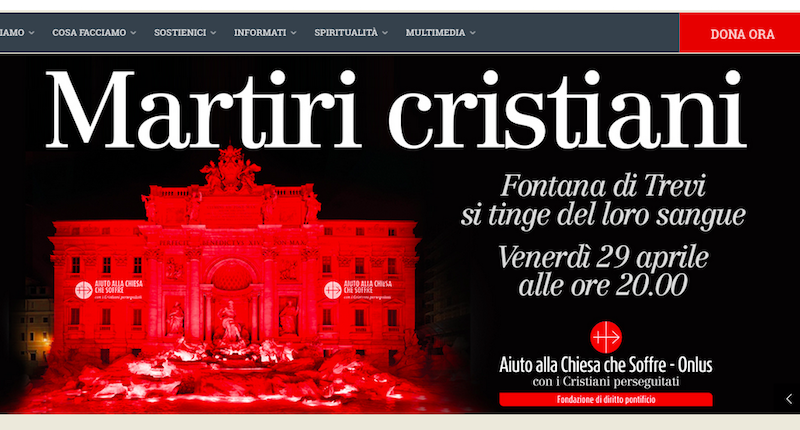 The home page from the Italian chapter of Aid to the Church in Need shows the Trevi Fountain lit in red to honor contemporary Christian martyrs. Photo via: http://acs-italia.org/
April 29, 2016
Josephine McKenna

ROME (RNS) The Eternal City's iconic Trevi Fountain was bathed in vivid red light late Friday (April 29) to honor the blood shed by Christian martyrs and what organizers said are an estimated 200 million Christians suffering persecution around the world.

Hundreds of people gathered at the historic fountain for the event organized by Aid to the Church in Need, a Catholic foundation backed by the Vatican.

The charity says that Christians are the most persecuted religious group in the world and that their situation continues to worsen in many countries where religious freedom is severely limited.

Chaldean Catholic Bishop Antoine Audo of Aleppo -- a city plunged into deeper conflict this week after Syrian government airstrikes destroyed a hospital -- told the crowd there was a risk that all the churches in his country would disappear because of the long-running conflict.

Audo urged people to remember those who have been killed or forced out of the country.

“Every day people are forced to leave everything and flee,” he told the crowd. “There is a risk that the country will be emptied of all its churches.

“All the churches in Homs" -- another major city -- "have been destroyed since the beginning of the war. We are asking: Why are Christians being terrorized?”

“We are here to let persecuted Christians know that they have not been abandoned and (are) not alone and to ask people who walk through these piazzas to not forget these people,” said Galantino, who met recently with beleaguered Christians during pastoral visits to Iraq and Jordan.

Also on Friday, Vice President Joe Biden -- who was at the Vatican for a church-sponsored conference on cancer research -- met with the Vatican secretary of state, Cardinal Pietro Parolin, to discuss what the White House said was “the persecution of Christians and other religious minorities across the Middle East.”

At the Trevi Fountain event later that evening, as if to reinforce the urgency of the issue, graphic images of the Syrian war and violent attacks on Christians were projected on the white walls above a Baroque fountain whose swirling figures are most familiar as a backdrop for tourist photos and from scenes in classic Italian films.

As the images displayed, guest speakers also recalled the brutal murder of four nuns from Mother Teresa’s Missionaries of Charity, who were killed in Yemen in March, as well as the deaths of 147 students, many of them Christians, at the hands of al-Shabab militants in an attack on Garissa University in Kenya in 2015.

Aid to the Church in Need says the Christian population in Iraq has fallen from 1 million in 2002 to less than 300,000 today. The organization fears the Christian community will no longer exist there in five years.