(RNS) Several people have contacted me over the last 24 hours to let me know about a quirky new Bible translation called “Bible Emoji: Scripture 4 Millennials.”

I was tickled to hear about this project! After publishing “The Twible: All the Chapters of the Bible in 140 Characters or Less . . . Now with 68% More Humor” back in 2013, I have frankly wondered why more people don’t try to adapt the Bible to the needs of today’s readers.

I loved the process of “translating” the Bible into tweets over the course of four years, tweeting out a new chapter a day. Since the tweets were gathered into book form (with cartoons, natch, because OF COURSE the Bible needs cartoons), I’ve heard from many people who were able to use The Twible to interest younger readers who aren’t typically into reading the Bible. Some churches have even purchased The Twible in bulk to give to confirmation classes as the de rigueur gift for their confirmands.

Hearing that made my day.

So when it comes to the idea of an Emoji Bible, I am all in. It’s about freakin’ time!

However, I found myself a little disappointed in the actual product. It’s definitely worth reading, and I appreciate the effort it must have taken to create . . . but there are issues.

First off is the KJV problem. If you really want to reach Millennials, as the subtitle promises, is the King James Version the best way to do it?

Nay, verily, one thinkest not. For lo, the KJV is exceedingly beautiful, but also recondite.

And speaking of accessibility, I hope the book will be made available in some way other than through iBooks. That’s such a specialized niche in the publishing world that it’s hard to imagine Bible Emoji will get the audience it deserves as a groundbreaking, unique Bible.

I can understand why the author (who has so far wanted to remain anonymous, but may have some connection to a fundraising effort a year and a half ago by a USC graduate named Kamran Kastle) would want to go with iBooks, since the emoticons need to be in color and a length of 3,282 pages makes a color print book almost apocalyptically cost-prohibitive.

But still. If you’re going to restrict your audience so narrowly and go with iBooks, why not include some of the bells and whistles that only iBooks lets you do, like incorporating sound clips, little movies, and interactivity? 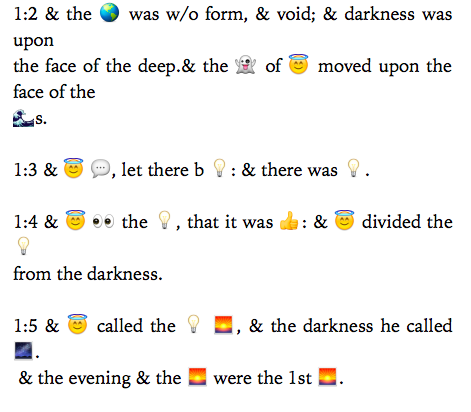 The bigger issue is that the book doesn’t take enough liberties. It gets boring and repetitious. I’d rather see an Emoji Bible that really takes the time to explain the text and lets readers have some fun understanding it. This, on the other hand, is a serviceable KJV with some Emojis sprinkled here and there. (It also has too many typos, spacing problems, and formatting issues. Oh copy editor, where art thou?)

Of course, other people might disagree about the need for a Bible that digs deeper to help young readers understand and relate to what’s going on. My own book has been accused of bending too far in the other direction and taking too many liberties. Some people just don’t believe in updating the Bible for modern audiences. To wit this Tweet from Chris Foley who wrote: “stop defacing the holy book you c**t you are not God”:

(Yes, sometimes those Christians get downright passionate about defending the Word from interlopers. I hope that the good author of Bible Emoji can be spared some of the vitriol from people who forget that “defending God’s word” might not be quite compatible with calling perfect strangers “c**t.” Ah, well.)

Overall, Bible Emoji is an interesting and cool concept that doesn’t quite live up to its own possibilities. I love the idea. I’d just like to see a better, and more widely available, execution.

(Jana Riess is senior columnist for RNS. Read her columns at Flunking Sainthood)