PRISTINA, Kosovo (RNS) Three years ago, Joshua Stanton was walking around Peja, a Balkan city where the skyline is punctured with the dainty minarets of three historic mosques, when he decided to put on his yarmulke.

This, he explained later, was not something he would do in France, in Germany or in much of Europe, where anti-Semitism is on the rise. But as a young rabbi visiting from New Jersey, Stanton, then 27, said he felt different in this region recently engulfed in an ethnic civil war that left many dead and missing.

The reaction from people in the street — most of them Muslims — astonished him. People came up to him, grabbed him by the hand, asked where he was from, welcomed him to their country.

“Are you Jewish?” he remembers them asking. “We love the Jews. Israel helped us rebuild after the war.”

Stanton came to Kosovo, a small, amoeba-shaped country with a population that is 97 percent Muslim, to attend Interfaith Kosovo, an annual gathering of religious and secular leaders from around the world. His experience there and on the streets of Peja were so overwhelming for Stanton, he has returned to Kosovo twice more. 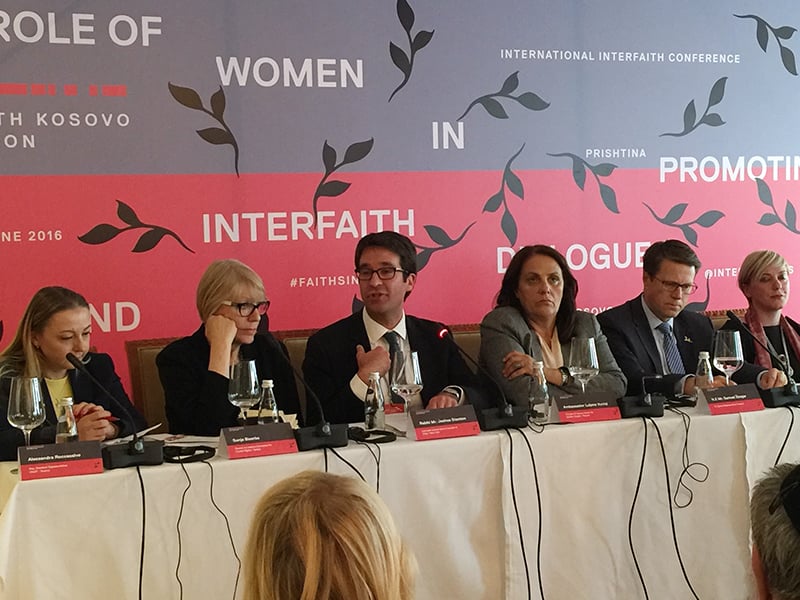 Rabbi Joshua Stanton, center, speaks on a panel during Interfaith Kosovo, an annual gathering of religious and secular leaders from around the world. RNS photo by Kimberly Winston

This year, he returned to the gathering, held in the developing nation’s capital of Pristina, with 10 companions who came as the country’s guests. All are, like Stanton, young Jews from the New York-New Jersey area who are interested in interfaith relations.

Why are American Jews traveling to Kosovo, an 8-year-old nation most of them didn’t know existed before their visit, to learn how to better relate to Muslims back in the U.S.?

The answer lies in the Middle East.

“Interfaith dialogue in the U.S. is stuck in the framework of the Israel-Palestinian conflict,” Stanton said, referring to the 80-year-old, often deadly struggle over lands claimed by both Jews and Arabs. “This will force them to think creatively about what we can do to reframe them.”

“So the hope in going to Kosovo is to give this group of young Jewish leaders a chance to imagine what Muslim-Jewish relations can be in the U.S. and then to come back and improve those relations in the New York area.”

There have been Jews in the Kosovo region since Roman times. Many more migrated to the region in the Middle Ages as they were expelled from other places, like Spain. They came, learned the local language, and became merchants, doctors and artisans.

The acceptance Stanton encountered can be traced to World War II. Kosovo — then part of Albania — refused to turn over its Jews to the invading Nazis for deportation. Many were hidden by local Albanian families — Muslims, Catholics and Serbian Orthodox Christians — and sheltered by local governments.

“According to besa, when an individual offers help and takes a guest into his or her home, he or she also has a duty to protect the safety of the guest,” Hoxhaj wrote in 2013, the year Stanton first visited Kosovo. “Albanian customary law states that ‘the house of an Albanian is God’s and (a) friend’s.’”

More than 2,000 Jews survived the Holocaust in Kosovo and Albania.

But with the rise of communism in the region in 1946, the year Kosovo became part of Yugoslavia, many Jews departed. Today, there are fewer than 100 Jews in Kosovo, according to a 2013 report in the Forward, a U.S.-based Jewish newspaper.

The Yugoslav government tore down the last synagogue in Kosovo in 1963. Today, it is the site of a new parliament building, its courtyard decorated with a memorial.

“This plaque is raised in memory of Kosovo Jews that perished in Nazi camps during [the] Holocaust,” a plaque reads. “People of Kosovo will never forget them.”

Then there’s the Kosovo War, a conflict between Albanians and Serbs over the land the Republic of Kosovo now encompasses that began in 1998. Neighbors killed neighbors, often targeting them for their religion or ethnic identity.

Today, Kosovo’s population is overwhelmingly ethnic Albanian; Serbs have mainly immigrated to Serbia and elsewhere. The shell of a large Serbian Orthodox church stands amid weeds just a few blocks from where the Interfaith Kosovo conference took place. 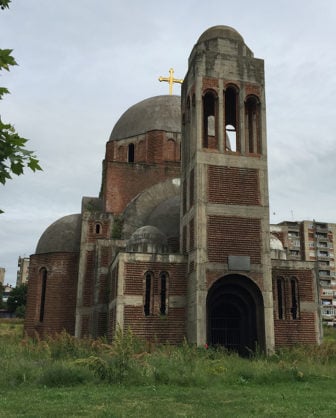 An abandoned Serbian Orthodox church, just steps from the site of the Interfaith Kosovo conference, serves as a reminder of the new nation’s troubled religious past. RNS photo by Kimberly Winston

To some Jews, the conflict, which still percolates in Serbia’s refusal to recognize Kosovo as a nation, resonates as familiar.

“Kosovo has the feel of Israel in some ways,” said Michael Sherman, a 29-year-old who works in real estate and made the trip. “It’s a young, new country that’s really eager and rightfully so since they fought for so long for independence.”

The men and women who accompanied Stanton this year are all members of Tribe, a service and social group for young Jews in New York City. They range in age from their mid-20s to their early 30s and mainly identify as Conservative Jews, though not all attend synagogue regularly.

Seated around a large, circular table among the 300 conference attendees from 56 countries, they listened to Shirin Ebadi of Iran and Tawakkol Karman of Yemen — both Nobel Peace Prize laureates and both Muslims — speak with urgency of Islamic fundamentalism in their homelands.

“Instead of throwing bombs at them (fundamentalists), we should be throwing books at them and building schools,” the diminutive Ebadi said after her address. “Then you will see that fundamentalism will be eliminated.” 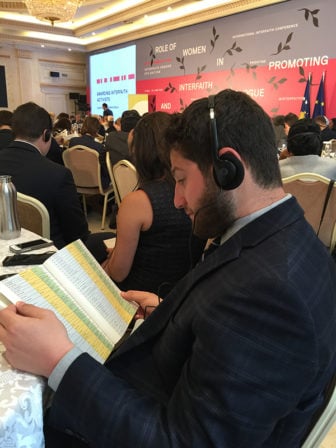 Ebadi’s speech rippled across the Tribe group. Eric Oppenheimer, 26, said it prompted a late-night discussion between himself and Stanton about steps they could take back in New York.

“We talked about how we could get (Muslim and Jewish) leaders to a table and talk about that,” Oppenheimer said. “That is a first step, for me at least, to understanding how this will work.”

Robin Shapiro, 26, chatted with a conference attendee from Slovakia about that country’s difficulties in integrating Muslim refugees.

“That is a challenge I see in America,” he said. “Is there a way for me to go home and think about that and how we can integrate all immigrant cultures in America? How can we come together?”

He is returning to New York with ideas about how an interfaith soccer program could bring Muslims, Jews and others together.

And Sherman, who helped Stanton recruit Tribe members for the trip, said Interfaith Kosovo bolstered his confidence in the ability of Muslims and Jews to coexist and thrive.

“I am going to show some of my clients back in New York what I have learned in this region about how Muslims in the past have helped us and took us in as part of their family,” he said. “I think that can give a new perspective in the work going on in the Israeli-Palestinian conflict many of them are concerned with.”

When the group returns to New York, they will meet to plan their outreach efforts to the local Muslim community.

“The nerve-wracking thing for me is I don’t know the outcome,” Stanton said. “But the exciting thing is I think we’ve picked the right people. I think they are going to figure it out.”

Tribe members came to Interfaith Kosovo at the invitation of Petrit Selimi, Kosovo’s deputy minister of foreign affairs, who met and befriended Stanton three years ago, even attending a Shabbat, or Sabbath, dinner the rabbi presided over in a Pristina restaurant.

For him, the link between Kosovo and New York City, between Muslims here and Jews there, is clear.

“New York City is best positioned to remember terror but also to promote tolerance, cooperation and cross-faith links between peoples,” Selimi said after the conference. “Kosovo is secular and New York is secular, but we have a role to play in fortifying the communal identities and continuous interfaith dialogue.”

Two weeks before Tribe members left for Kosovo, their hometown newspaper, The New York Times, published a front-page story that many felt undercut the goals of Interfaith Kosovo.

“How Kosovo Was Turned Into Fertile Ground for ISIS,” the headline promised to explain. In it, reporter Carlotta Gall, who covered the Bosnian War from Kosovo in the 1990s, detailed how more than 300 Kosovars have reportedly traveled to join the Islamic State group, or ISIS — more than any other nation, per capita, in Europe.

Gall described a gathering of fundamentalist Muslims near Bill Clinton Boulevard, a main thoroughfare through Pristina and only steps away from the conference.

“It is unfair to judge a country by a small number of its citizens,” Kadri Veseli, speaker of Kosovo’s parliament, told the conference through a translator. “It is the time to show the extremists that religions are a value and not their tool.”

Tribe members, who traveled through Kosovo and the adjacent countries of Montenegro and Serbia days before the conference, said the Times’ story did not match their impression of the region.

“One thing my mom said to me a long time ago that resonates here is that other people of faith usually respect you in your faith,” said Sarah Fried, 28. “I definitely feel that here. It feels so comfortable to say, ‘I am here because I am a Jew.’ No one is judging.” 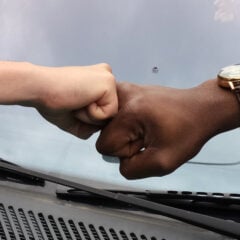 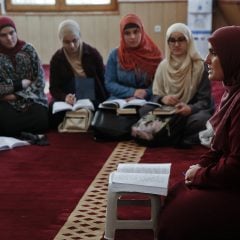