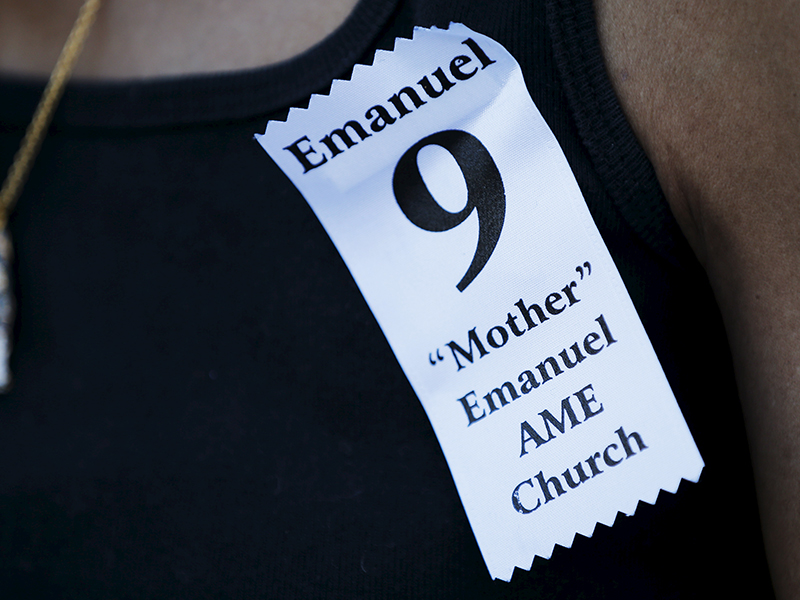 A woman wears an "Emanuel 9" ribbon to the funeral for the Rev. Clementa Pinckney in Charleston, S.C., on June 26, 2015. Photo courtesy of REUTERS/Brian Snyder
June 23, 2016
Lauren Markoe

(RNS) After an usually short time on the job, church officials have reassigned the pastor of the Charleston, S.C., church where a gunman killed nine people during Bible study a year ago.

The nine victims included the church's pastor, the Rev. Clementa Pinckney, who was also a South Carolina state senator.

Deas has declined to provide any details as to the reason for her reassignment.

She will pastor Bethel AME church in Georgetown, S.C., and Bethel's pastor, the Rev. Eric Manning, is expected to come to Emanuel, The Post and Courier reported.

READ: A year after the Charleston church shooting, what has changed?

Typically, AME pastors spend several years with a church before a reassignment. In the time between Pinckney's death and Clark's appointment to Mother Emanuel, the Rev. Norvel Goff, who is the presiding elder of the AME district that includes Emanuel, served as pastor.

Goff, some familiar with the church said, struggled to balance the needs of parishioners with the demands of a church thrust into the international spotlight.

Deas also seemed to have difficulty steering the church back toward normalcy.

Charleston and Mother Emanuel spent 12 days this month mourning and remembering the victims of last year's killing spree with vigils, community suppers and other commemorations.

Authorities say Dylann Roof, a young white man with a history of racist views, sat through Bible study and pulled a gun at the end of the hour, killing most of the 12 people who had gathered that evening.

His federal trial is scheduled to begin in November. Prosecutors are seeking the death penalty.