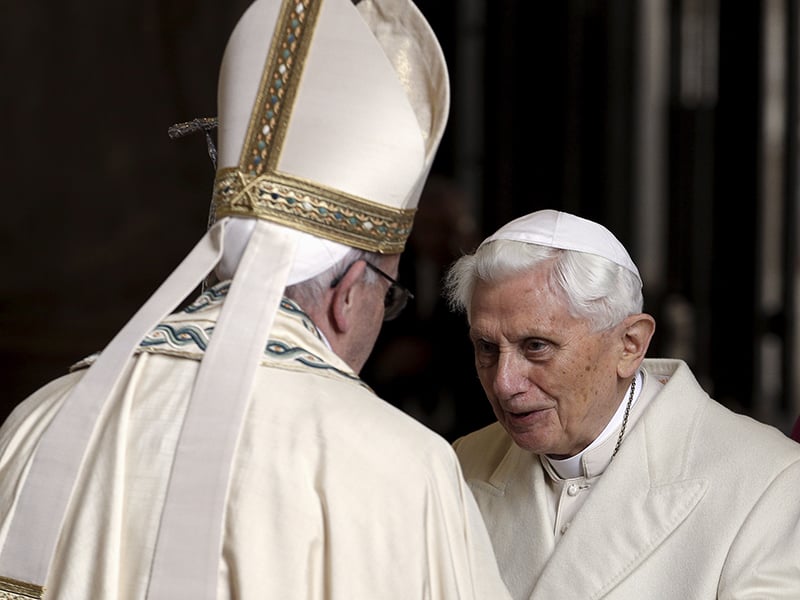 Pope Francis, left, meets Emeritus Pope Benedict XVI before opening the Holy Door to mark the opening of the Catholic Holy Year, or Jubilee, in St. Peter's Basilica at the Vatican on Dec. 8, 2015. Photo by Max Rossi/Reuters
June 28, 2016
David Gibson

VATICAN CITY (RNS) A Vatican ceremony Tuesday (June 28) featuring a rare joint appearance by Pope Francis and his predecessor seemed aimed at tamping down speculation about the unusual circumstance of having two living popes.

In recent weeks debate has erupted over whether there are two popes sharing authority in the church, or whether Francis is the sole successor of St. Peter.

During an in-flight press conference on his return to Rome on Sunday (June 26) from a trip to Armenia, Francis was asked about that controversy and he dismissed it. Pope Emeritus Benedict XVI is "clearly" a retired pope, Francis said, and "there is one single pope."

Francis also recounted how friendly they are and how Benedict has shooed away conservative supporters who come complaining about Francis' more reformist papacy.

Benedict "is the man that protects my shoulders and back with his prayer," Francis said.

READ: A Vatican conspiracy persists, and a bigger mystery unfolds

Benedict seemed to reinforce that dynamic at Tuesday's event marking 65 years since Joseph Ratzinger -- who took the name Benedict on his election as pope in 2005 -- was ordained a priest in Bavaria.

“Thanks above all to you, Holy Father! Your kindness, from the first moment of the election, in each moment of my life here, really moves me inside," said the 89-year-old Benedict to an audience made up largely of senior churchmen in the Roman Curia.

“More than in the Vatican Gardens, with their beauty, your kindness is the place where I live: I feel protected,” he added.

Benedict also offered an endorsement of the course Francis has charted for the church -- a course that some traditionalists say focuses too much on leniency.

"We hope that you can go forward with all of us on this path of divine mercy, showing us the path of Jesus toward God," said the retired pope, who stood without assistance while making impromptu remarks.

Benedict, dressed in white like Francis, was clearly frail but his appearance put to rest rumors that he was in failing health and approaching death.

It has been more than three years since Benedict shocked the world by announcing his resignation from the papacy -- the first pope in more than 600 years to do so.

His ongoing presence at the Vatican, living a secluded life within the walls of the city-state, has prompted speculation that Benedict may still wield power over Catholic Church decision-making.

But in the rare moments both Benedict and Francis have appeared together, they have shown a united front, with the current pontiff praising his predecessor.

Speaking on Tuesday, Francis referred to his “dear brother” Benedict and celebrated his contribution to the Catholic Church.

“Holiness, you continue to serve the church, you do not cease really contributing with vigor and wisdom to its growth,” Francis said.

The pope concluded his speech by embracing Benedict and chatting for a few moments before the duo returned to their respective thronelike chairs in the same marble hall where Benedict announced his intention to retire.