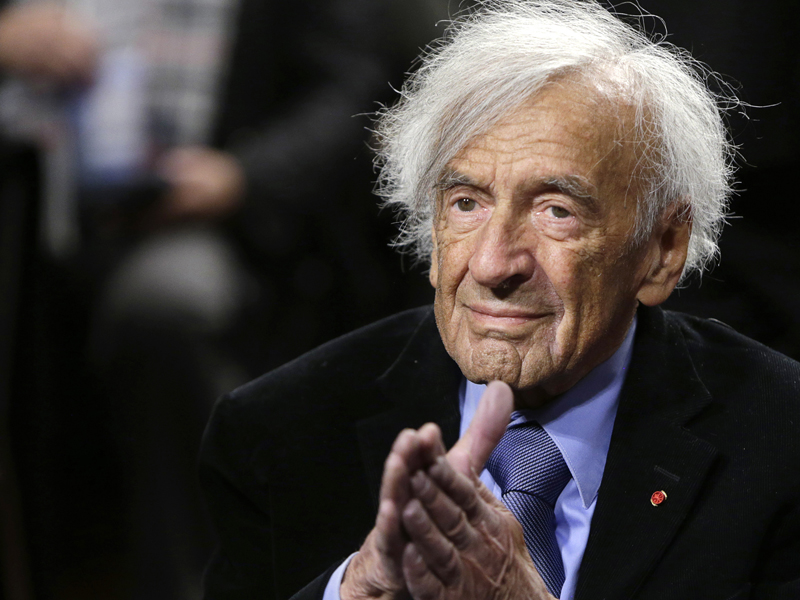 (RNS) Elie Wiesel, the Holocaust survivor and Nobel Peace Prize winner whose memories of persecution and teachings on tolerance made him one of the world's most revered moral voices, has died at 87.

His death at his home in Manhattan was confirmed Saturday (July 2) by Yad Vashem, Israel's national Holocaust memorial and museum.

"Elie Wiesel was one of the great moral voices of our time, and in many ways, the conscience of the world," President Obama said in a statement.

"Elie was not just the world's most prominent Holocaust survivor, he was a living memorial. After we walked together among the barbed wire and guard towers of Buchenwald where he was held as a teenager and where his father perished, Elie spoke words I've never forgotten - 'Memory has become a sacred duty of all people of goodwill.'"

As an author, playwright, professor and speaker, Wiesel dedicated his life to the remembrance of the 6 million Jews and millions of gays, Roma and others who perished in the Nazi death camps.

He survived two of those camps -- Buchenwald and Auschwitz -- and retold the horrors of that experience in service of the idea that remembering Hitler's planned extermination of the Jews will make genocide a less likely fate for his or any other people.

"To forget the dead would be akin to killing them a second time," he wrote in his personal Holocaust story, "Night," which was first published in 1956, was translated into more than 30 languages and remains required reading for high school and college students around the world.

In awarding the Peace Prize in 1986, the Nobel Committee praised Wiesel as a "messenger to mankind" and "one of the most important spiritual leaders and guides in an age when violence, repression and racism continue to characterize the world."

A deeply religious Jew, Wiesel championed his own people, speaking out against anti-Semitism and in support of Israel, and for the release of the millions of Jews trapped in the Soviet Union.

But he used his moral authority to call attention to persecuted peoples the world over, including the victims of the war in former Yugoslavia, apartheid in South Africa, the Kurds, victims of famine in Africa, Nicaragua's Miskito Indians, Cambodian refugees and Argentina's "disappeared."

"Sometimes we must interfere. When human lives are endangered, when human dignity is in jeopardy, national borders and sensitivities become irrelevant,'' Wiesel once said.

"Whenever men or women are persecuted because of their race, religion, or political views, that place must -- at that moment -- become the center of the universe.''

He did not mince words whenever he thought evil was being accommodated.

While at the White House in 1985 to receive the Congressional Gold Medal, he rebuked then-President Ronald Reagan for planning to lay a wreath at a German cemetery where some of Hitler's notorious Waffen SS troops were buried.

"Don't go to Bitburg," Wiesel said. "That place is not your place. Your place is with the victims of the SS."

At the dedication of the United States Holocaust Memorial Museum in 1993, Wiesel told then-President Bill Clinton: “Mr. President, I must tell you something. I have been in the former Yugoslavia last fall. I cannot sleep since what I have seen. As a Jew I am saying that. We must do something to stop the bloodshed in that country.”

Wiesel's own persecution at the hands of the Nazis began when he was 15, and he and his family were deported from their home in Sighet, Transylvania, to Auschwitz, where his mother and younger sister died. His two older sisters survived.

Toward the end of the war, Wiesel and his father were transferred to another slave labor camp, Buchenwald, where his father was killed.

After the war, Wiesel studied at the Sorbonne and by 19 had become a journalist. He considered suicide and never wrote of or discussed his Holocaust experience until 10 years after the war, after the French author Francois Mauriac, whom Wiesel had interviewed, encouraged him to write of his experience.

"Night" was followed by more than 60 memoirs, novels and plays, including a Haggadah, the book used to guide Jews through the Passover seder.

Often he was asked how he retained his faith in God despite the cruelty and death -- especially the murders of children -- that he witnessed during the Holocaust.

"I rarely speak about God. To God yes. I protest against Him. I shout at Him," he told the Paris Review in 1984. "But open discourse about the qualities of God, about the problems that God imposes, theodicy, no. And yet He is there, in silence, in filigree."

READ: As Holocaust museum turns 20, the ranks of survivors dwindle

Wiesel moved to New York in 1956 and became an American citizen in 1963. In 1976, Boston University appointed Wiesel the Andrew W. Mellon Professor in the Humanities, and he taught in the university's religion and philosophy departments.

Shortly after he received the Peace Prize in 1986, Wiesel and his wife, Marion, founded the Elie Wiesel Foundation for Humanity. In 2008 Wiesel discovered that he and the foundation had both been victims of  the Ponzi scheme run by Bernie Madoff, who made off with $15 million from the nonprofit.

Wiesel told Oprah Winfrey that he and Marion, also a Holocaust survivor, consoled each other about the loss, remarking that they "had seen worse." Then donations poured into the foundation from those who had heard of its misfortune.

Those who knew Wiesel personally said he was a somber man. An old friend, Chicago professor Irving Abrahamson, once said of him: "I've never seen Elie give a belly laugh. He'll chuckle, he'll smile, there'll be a twinkle in his eye. But never a laugh from within."

Though Wiesel took heart in the proliferation in past decades of Holocaust museums and programs to teach tolerance, he mourned the persistence of bigotry and continued to speak out, well into his 80s, against indifference as "the epitome of evil."

“Wiesel's life was an inspiring, indeed towering, example of an individual’s willpower to overcome the worst of human evil, keep alive the memory of 6 million murdered Jews, and stand guard throughout against the dangers of extremism, indifference and historical amnesia,” said David Harris, CEO of the American Jewish Committee.

Wiesel received more than 100 honorary doctorates and scores of other honors during his life, including the Presidential Medal of Freedom, the National Humanities Medal, the Medal of Liberty and the rank of Grand-Croix in the French Legion of Honor.

"His passing leaves the world bereft of a profound moral conscience," B’nai B’rith International, the Jewish human rights organization, said in a statement.

Wiesel is survived by his wife and their son, Shlomo Elisha Wiesel.

(Siobhan Fitzpatrick and Reuters contributed to this story)