“I believe I speak for every single American when I say we are horrified over these events, and we stand united with the people and the police department in Dallas,” he said.

Obama said he spoke with Dallas Mayor Mike Rawlings, and offered him condolences and federal assistance.

Dallas Police say at least five officers were killed and six more injured by multiple snipers in downtown Dallas as protests over police-involved shootings erupted Thursday (July 7). One suspect shot and killed himself after being surrounded by police; three more have been arrested, police said.

“We will learn more, undoubtedly, about their twisted motivations, but let’s be clear: There is no possible justification for these types of attacks,” Obama said. “Anyone involved in the senseless murders will be held fully accountable. Justice will be done.”

As he did earlier Friday, Obama called on Americans to do more to address police-involved shootings and violence in the criminal justice system. And he also suggested that lax gun laws also played a role: “We also know that when people are armed with powerful weapons, it makes shootings like this more deadly and more tragic,” he said.

But he said his immediate concern was for the officers and their families. “Today is a wrenching reminder of the sacrifices they make for us,” he said. “They are heartbroken. The entire city of Dallas is grieving. Police across America, which is a tight-knit family, feels this loss to their core. And we’re grieving with them.”

It was the second time Friday that Obama addressed policing issues as the rapidly evolving situation continued to command his attention in Warsaw, where he’s attending a two-day NATO Summit with leaders of the military alliance. Before the summit, he also met with European Council President Donald Tusk and European Commission President Jean-Claude Juncker, focusing largely on the impact that the United Kingdom’s vote to leave the European Union would have on the rest of the continent. 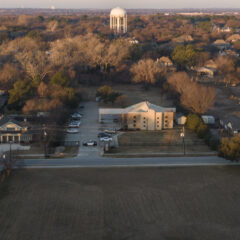