What you thought was naughty may actually be holy.

That’s the message of Good Christian Sex: Why Chastity Isn’t the Only Option–And Other Things the Bible Says about Sex, a new book by Bromleigh McCleneghan, an associate pastor at Union Church outside of Chicago. The book is McCleneghan’s attempt to free Christians from shame about having premarital or extramarital sex.

At a time when many conservative Christians are already frustrated by shifting social mores when it comes to sex, McCleneghan’s book may feel antagonistic. Her way of interpreting the Bible is not systematic, for example, and she tends to feel her way through the text. And she also admits in this interview that her sexual ethics might not rule out polyamory. It’s not the kind of content that will draw traditionalists en masse.

Yet I suspect that McCleneghan’s book will be persuasive to many believers who feel some cognitive dissonance when it comes to sex. (While Christians are likely to say that avoiding sex outside of marriage is a good thing, most engage in it anyway.) For this reason, I decided to chat with her about her views on sex and why she believes the church needs to change its thinking.

RNS: Many Christians believe it’s best to remain a virgin until marriage. You say this issue is complicated because people have varying definitions of “virignity.” What are some of the most common?

“Virginity” is such a fraught and gendered term, involved through the centuries in policing the ownership of women’s bodies, or some harmful forms of purity culture, that it’s not really useful. And for some queer folks, the emphasis on heterosexual acts means that it’s not a good line, or norm, for ethics.

I am less concerned with which “acts” are “okay” for unmarried Christians and more interested in helping people ask questions about healthy intimacy, experiencing pleasure and desire in holy ways, and in learning to be vulnerable with a partner in ways that affirm their mutual identity as children of God.

RNS: You root some of your thinking in Genesis 2:25 where Adam and Eve are naked but unashamed. Many would agree that sex and bodies aren’t things to be ashamed of, but some would also say that the principle here is specifically about the way a “husband” and “wife” are relating to each other. Your response?

BM: The thing that changes, that causes Adam and Eve to feel ashamed and sends them off to the sewing table, isn’t a change in their marital status. It’s that they’ve been caught in their disobedience.

Ideally, in marriages, partners won’t feel shame. But the question of feeling at home in our bodies, at coming to terms with our vulnerability, is a lot more complicated than that. Marriage is no guarantee. And, indeed, our vulnerability, our embodied nature, our relationships, and our institutions are affected by sin.  Sometimes we feel shame because of our own sin; sometimes those feelings are undeserved. I am trying to explore the difference.

RNS: You argue that early Christian fathers negatively shaped our perception of sex due to their “body/soul dualism.” What were the positive and enduring elements in early Christian thought on sex, in your opinion?

BM: When talking about lust and fidelity in the Sermon on the Mount, Jesus counters that mind/body duality, suggesting that you don’t actually have to commit adultery to sin against your partner.  In an age witnessing the rise of emotional affairs that discussion seems particularly prescient.

Also powerful is the way the church offered alternatives to the dominant culture, a culture that was often oppressive or dangerous. Living into vows of chastity could offer freedom from the potential of disease or death. Chastity in that case was not about limitation for many—especially early Christian women in religious orders—but about new freedoms to live fully into grace.

RNS: Drawing from theologian Christine Gudorf, you argue that we can reason that sexual pleasure is good because “it feels good.” Many who commit sexual crimes claim that it feels good, but we still condemn those acts. Is feeling good sufficient for concluding that something is good?

BM: Gudorf calls sexual pleasure a premoral good, and I talk about it in terms of “solo-sex” in order to explore it without asking questions about right relationship. So, no, feeling good isn’t sufficient. We need mutuality and consent, for starters.

But the idea that something that feels good could actually be good is often overlooked in Christianity, and so too many folks don’t know how to pursue pleasure in healthy and holy ways. I have three kids, and we’ve watched the “Elmo’s Potty Time” video roughly 600,000 times.  One of the most enduring lessons in it is “listen to what your body is telling you.”  Do you have to use the bathroom, are you hungry, do you feel safe or scared?  Knowing if something feels good or bad is a baseline thing that we Christians, with some of our sexual moralizing and fear mongering, have failed to teach people. 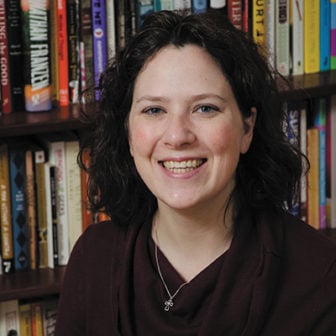 Bromleigh McCleneghan is author of “Good Christian Sex” and an associate pastor outside of Chicago.

RNS: You follow this up with citing Paul’s words in 1 Corinthians 6 and ask whether it is good to “deny our bodies…the things they need for health and joy.” What do you say to the many Christians who are not currently sexually active and claim to be joyful and healthy? Are they lying? Do they still “need” to find a way to experience sexual pleasure despite their claims of contentment?

BM: We all need to experience pleasure, relaxation, calm. We’re learning how stress and trauma have physiological effects that are passed on through generations. Does that mean we all need the exact same type of pleasure? To experience the rush of endorphins in response to the same stimuli? No.

Another analogy: we all need protein. Some of us are beef eaters, some of us eat a bunch of tofu and beans. We can satisfy our needs in lots of different ways – some of which are better choices morally than others (ie, if we care about the earth we should all eat a lot less meat) – but there’s not much point denying that we have some pretty universal human needs. Denying the facts of our humanity seems like a theologically problematic move.

RNS: You talk about the “inner conflict” Paul experienced and mentioned in Romans 7. How do you interpret this and why is it relevant?

BM: One thing I’ve encountered with this book, mostly from folks who haven’t read it, is the assumption that because I argue that marriage is an insufficient norm for healthy and holy sexuality, I am also arguing that “anything goes.” I totally believe that there are such things as sexual sins: lust, infidelity, participation in rape culture, treating your partner poorly.

I love Paul’s articulation of the knowledge that something is wrong, is sinful or harmful, and yet the feeling of temptation to do it anyway. That feeling of standing outside yourself, almost watching yourself choose poorly. It’s vulnerable and wise, and deeply instructive for us, I think, as we try to identify what sin feels like.

RNS: Your subtitle claims this book is about what the Bible says about sex. Give us one or two passages that you think should radically change the conservative Christian’s mind on sexual ethics.

BM: Christians have tended to read the biblical story of Onan as a prohibition against masturbation or non-procreative sex. But it’s really not about that at all. Onan’s sin is that he is shirking his duty to his sister-in-law, having sex with her (and presumably enjoying it) without fulfilling his obligation and actually doing injury to her. The practice of sleeping with your sister-in-law, or giving your dead brother an heir, was a means of providing economic security and protection to a woman who would otherwise be without support, set adrift in a society where women were pretty much only sustained through their relationships with men. Onan has sex with Tamar, but denies her the means to protect or sustain herself. Pursuing pleasure at a cost to another, especially a vulnerable other, is displeasing to the Lord. Shame on Onan.

RNS: You seem to take some Bible verses on sex as prescriptive but not others. What determines whether you think a passage should be taken literally or prescriptively and which ones do not apply?

BM: I think a systematic hermeneutic, or interpretive lens, is not particularly helpful when it comes to the Bible. It’s worth pointing out that Christians throughout the ages have used a range of interpretive lenses in making sense of the biblical text.

If a story, passage, or letter reflects what we know about God as revealed through the life, death and resurrection of Jesus the Christ, who called us to love neighbor and enemy, and to know abundant life, then we should take it prescriptively. And if it blames a rape victim, incites genocide, or offers an apologetics of slavery or misogyny, than maybe not so much.

BM: Polygamy as it’s usually practiced in fundamentalist cultures – one older dude with a bunch of younger women – doesn’t pass the tests of equal power and mutuality. Polyamory, though, as a sexual and romantic relationship between three or more consenting people?  I don’t know. I think it would be really hard insofar as intimacy is hard enough in a dyad, and mutuality would be well near impossible given the even more complicated power dynamics and the reality of sin. I think there’s something really lovely about long-term monogamy that would be hard to capture with additional partners. But, just because something is outside my experience doesn’t mean it’s necessarily wrong.