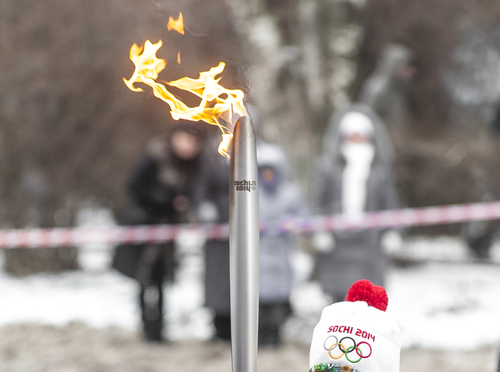 The Olympics are underway, featuring stories of human struggle -- and we don't just mean the games.
August 8, 2016
Jeffrey Salkin

Isn't the expression "throwing someone under the bus?"

At the summer Olympics, Israeli athletes attempted to board a shuttle bus to the ceremony. The Lebanese team was already on the bus. The head of the Lebanese group, Salim al-Haj Nakoula, physically blocked the Israeli athletes from boarding -- because, after all, there were hundreds of other buses that they could have taken.

On Sunday, the International Olympic Committee reprimanded him. Frankly, I think that the whole group should have been put on the next plane to Beirut.

This petty act of bigotry was team work, at its worst. A Lebanese Olympic committee source told the Lebanese television station Al Mayadeen that the athletes had collectively decided that the Lebanese delegation would bar the Israeli team from the bus.

The Lebanese athletes are "committed to the national position in refusing to be in the same location as Israelis," a source said.

Yes, given the choice: we would prefer this year's "diss-raeling" (my new term -- "diss" plus Israel) to the grisly terrorist assault on Israeli athletes of Munich, 1972 -- which were finally commemorated this year.

We would even prefer it to the darkness of the 1936 Munich Olympics, called "the Nazi Olympics" because Hitler used the event to advertise his regime.

But, even still: keeping Israeli athletes off the bus?

Because you cannot stand to spend -- what? -- ten minutes in their presence?

What is this -- sixth grade?

It's like the scene in "Forrest Gump," in which young Forrest gets on the school bus for the first time, and no one wants to sit with him.

This is the new metaphor for how some would deal with Israel -- "get off our bus."

True -- it lacks the sense of betrayal and the raw aggression of being thrown under the bus.

Keeping Israel off the bus is a game that anyone can play -- including respected Jewish academics, like Hasia Diner and Marjorie Feld.

A week ago, they petulantly signaled their absolute discomfort with, and rejection of, anything connected to Israel.

The discomfort with -- actually, their abhorrence of -- runs so deep that, for her part, Hasia Diner will not even enter any Jewish institution that identifies with Israel:

I feel a sense of repulsion when I enter a synagogue in front of which the congregation has planted a sign reading, “We Stand With Israel.” I just do not go and avoid many Jewish settings where I know Israel will loom large as an icon of identity.

Once again Israel is off the bus. Because this is the bus for the pure kids, the "too-cool-for-a-Zionist-shul" kids.

I once visited a friend who teaches at a large Ivy League university. We were in the faculty lounge.

He asked me how I had spent my summer vacation. As soon as the word "Israel" left my mouth, he cautioned me: "Don't say that word too loudly around here."

Because they will throw you off the bus.

My friend, the noted writer Thane Rosenbaum, comforts Israel: "It's not you; it's them."

We’ve heard this song before; the one-note wonder that epitomizes the moral superiority of some Jewish liberals:

“Oh, Israel, I visited you as a child and planted a tree. I spent a summer on a kibbutz, got sunburn, and learned a new dance. I always loved you, but no more.” (Note the back of the hand pressed dramatically against forehead, voice trembling.) “Your imperfection has stained me as a complicit Jew. Your policies toward the Palestinians have hurt me personally, and for this reason, you have lost my loyalty and love.”

While we are talking about who is on the moral bus, and who isn't -- can we talk about what happened in Iran?

Because, recently, Iran executed a teenage boy for having gay sex.

It is not as if this hasn't been covered in the media. It certainly has -- by the Washington Post, and in some prominent LGBT media outlets as well.

There is a term for the failure to scream about the executions of gays in Iran. We call it  "the soft bigotry of low expectations."

And they dare to throw Israel off the bus?