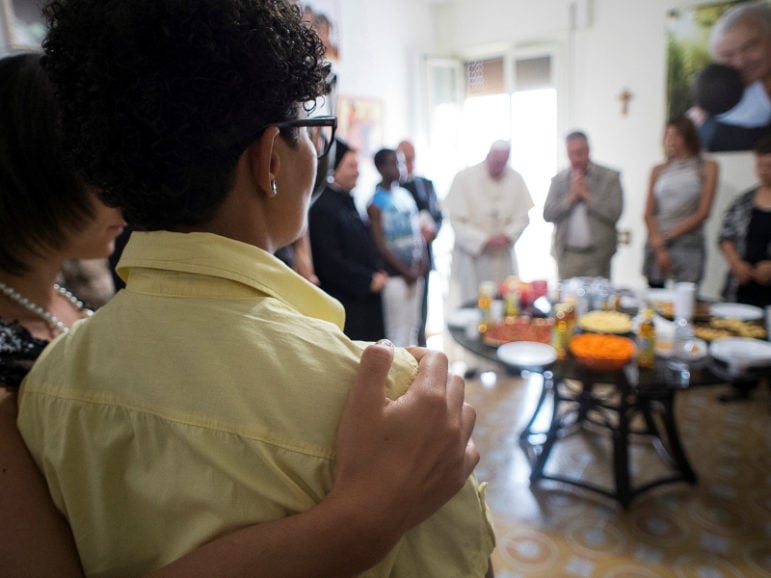 ROME (RNS) In yet another sign of his strong stance against human trafficking, Pope Francis made a surprise visit to 20 women who have been rescued from sexual slavery.

The pope met with the women on Friday (Aug. 12) at a Catholic Church-run refugee center in Rome, the Pope John XXIII community, which houses those rescued from prostitution.

The visit was one of the regular gestures Francis has made to highlight the Jubilee Year of Mercy, which runs through 2016.

The Vatican said in a statement that the women were from a range of countries, including Romania, Albania, Nigeria, Tunisia and Ukraine, as well as Italy.

All suffered severe physical abuse during their ordeals and are living under protection, the Vatican press office said.

The statement said the pope’s visit was another reminder of the urgent need to combat human trafficking.

Francis has been particularly outspoken against trafficking and slavery, calling it “a crime against humanity” and “an open wound on the body of contemporary society, a scourge upon the body of Christ.”

The United Nations Office on Drugs and Crime says it’s difficult to estimate the number of victims of sexual slavery but estimates around 140,000 are trapped in this cycle of exploitation, abuse and degradation across Europe at any one time.

Francis joined Anglican and Muslim leaders at the Vatican in 2014 to launch an anti-trafficking initiative.

In June this year the pontiff made an unexpected appearance at a Vatican conference that brought together Catholic Church officials, judges and prosecutors to discuss human trafficking and organized crime.

“Judges today are called more than ever to focus on the needs of victims,” he told them. “The victims are the first who need to be rehabilitated and reintegrated into society — and their traffickers and executioners must be given no quarter and pursued.”