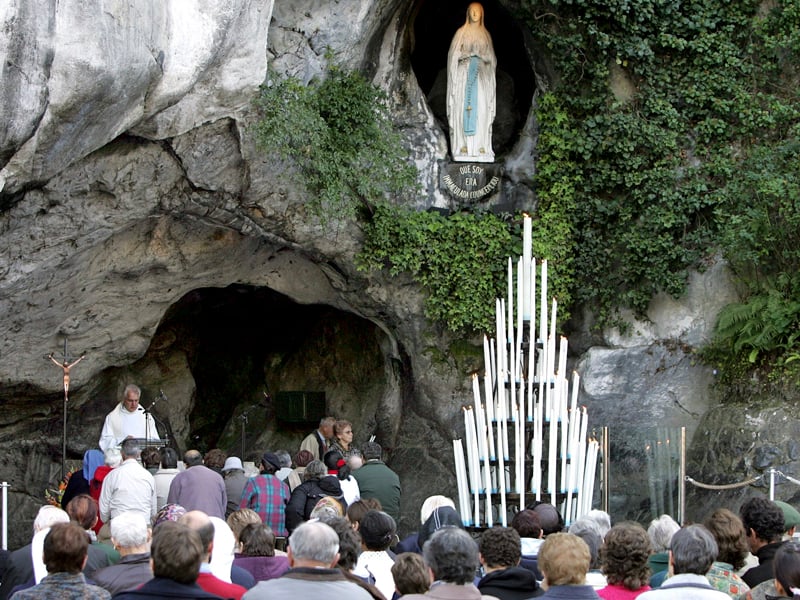 Pilgrims pray in front of Lourdes grotto during the plenary congress of France's bishops in Lourdes, southwestern France. The grotto is the site where the Roman Catholic tradition says St. Bernadette saw visions of Mary in 1858. Photo by Regis Duvignau/Reuters
August 12, 2016
Josephine McKenna

(RNS) In the wake of a number of terror attacks, security has been intensified in Lourdes in southwestern France as thousands of pilgrims prepare to gather there to pray at one of the most popular Catholic shrines in the world.

More than 250 police and paramilitary officers have been mobilized as well as soldiers and specialist security police to patrol the town, which is in the Pyrenees region near the Spanish border.

Lourdes has been famous since 1858, when a young peasant girl claimed to see visions of Mary, the mother of Jesus. The waters of Lourdes have been credited with numerous miraculous cures.

Now the shrine draws around 6 million visitors a year, making it second only to Paris for the stream of tourists it attracts.

Thousands of pilgrims are gathering there to mark the Feast of the Assumption of Mary on Monday (Aug. 15).

Q: First, what is the Assumption?

A: It's fair to assume that Catholics, and other Christians, understand the Feast of the Assumption better than they do the Feast of the Immaculate Conception, which, contrary to widespread belief, is about the conception of Mary, NOT Jesus. (His analogous feast is the Annunciation, on March 25, which falls nine months before Christmas.)

The Assumption is the belief that the Virgin Mary was bodily "assumed" into heaven at her death on Aug. 15. (Whether she experienced death first and then went to heaven is a matter of some dispute.) The commemoration was celebrated in the Eastern churches as early as the fourth century and is known as the feast of the Dormition, a word meaning "falling asleep."

Catholics also celebrated the day early on, but the Assumption was only defined as a Catholic dogma by Pope Pius XII in the 1950s, one of the few times papal infallibility has ever been invoked.

Q: So who put Lourdes on the map for Catholic pilgrims?

A: A 14-year-old shepherd girl named Bernadette Soubirous reported that the Virgin Mary appeared to her for the first time on Feb. 11, 1858. Bernadette later reported 18 apparitions at the Grotto Massabielle.

On several occasions Mary, dressed in white with a blue sash and a yellow rose on each foot, is said to have spoken to Bernadette, saying on one appearance: "I do not promise to make you happy in this world but in the other."

On another occasion Mary said to Bernadette, "I am the Immaculate Conception" -- apparently affirming a dogma that had been infallibly defined a few years earlier, in 1854. The Rosary Basilica, of Lourdes, France

Q: Why is Lourdes so popular with Catholics and other pilgrims?

A: Lourdes has a reputation for healing and inexplicable cures. The sanctuary and surrounding area, known as the "domain," include 22 separate places of worship.

Some come to pray at the sacred site or touch the rock in the grotto where Mary is said to have appeared. Others believe the spring water, which emerged during one of the apparitions, has healing qualities. So far the shrine’s medical bureau has officially recognized 69 people as having been cured of illness and disease by Our Lady of Lourdes.

Q: Given recent terror attacks in France, what kind of security measures are being taken?

A: While many events have been canceled in France over security concerns this summer, authorities in Lourdes are insisting that the pilgrimages and events at the shrine should continue.

Beatrice Lagarde, the prefect of the local Hautes-Pyrénees regional government, said in a radio interview the faithful had every right to access Lourdes and everything would be done to make the location secure.

Authorities have decided to open only three entry points into the shrine instead of the usual 12 for the Aug. 15 event. There will be systematic security checks and bag searches. Garbage bins have been replaced with clear plastic bags and traffic will be banned at certain times of the day.