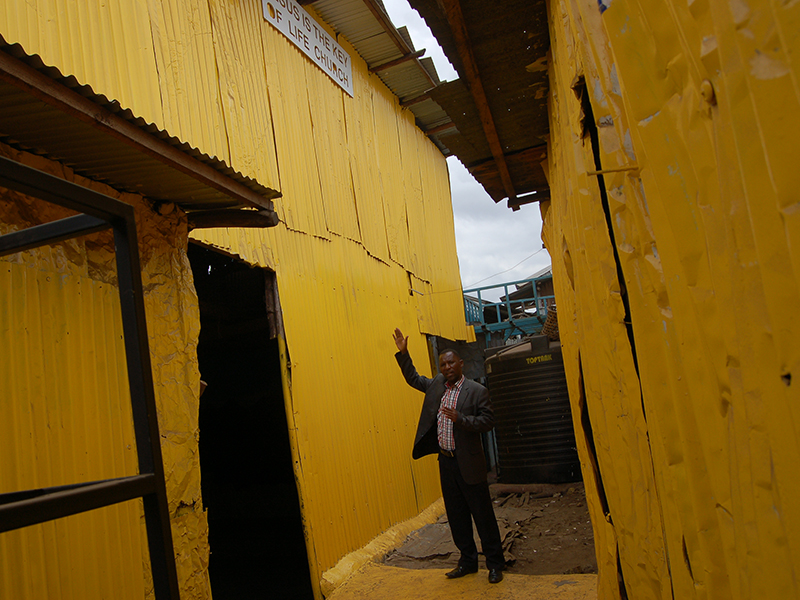 Pastor Steve Shirima, the leader of Jesus Is the Key of Life, a Pentecostal church, explains how his church was painted yellow. The church is deep within the shacks of a slum. RNS photo by Fredrick Nzwili
August 23, 2016
Fredrick Nzwili

NAIROBI, Kenya (RNS) In the midst of the rusty shanties of Nairobi’s Kibera slums, the Holy Trinity Anglican Church stands out in bright yellow.

Nearby sits another yellow house of worship -- the Jeddah Mosque Kambi.

The two were recently painted the color to symbolize love as the most important commonality among religions. Both the church and mosque are part of the Colour in Faith project, which celebrates religious pluralism globally and which launched in Nairobi in 2015.

Colour in Faith encourages expressions of acceptance and tolerance, and reaching out beyond one's own church, temple, synagogue or mosque.

So far two churches -- one Anglican and one Pentecostal -- and one mosque in Kibera have been painted, out of a planned total of six churches and four mosques that will be primed for the yellow paint. Nationwide, 25 churches, temples and mosques are planning to turn yellow.

“The yellow color symbolizes our openness. It indicates that we can work together as people of faith,” said the Rev. Albert Woresha Mzera, of Kibera's Holy Trinity Anglican.

“Kibera has been a hot spot of ethnic violence and we are now using this action to steer for peace,” he said.

Sheikh Yusuf Nasur Abuhamza, the imam at Jeddah Mosque Kambi, said the project can ease tensions throughout the nation.

“Yellow is neutral and is the color of the sun. It reflects on everyone,” he said. “Muslims painted the Anglican church and Christians painted the mosque. By painting together, the faithful share love and unite the people.”

Through art, people can imagine a world better than the one in which they now live, said Nabila Alibhai, the project's curator.

“We welcome any community around the world to bring Colour in Faith alive in their own neighborhood," she said. "All that is needed is the will of the organizations, some yellow paint and individuals interested in coming together to paint.”

In Afghanistan, the Colour in Faith chose pink for a project involving the distribution of thousands of pink balloons in the name of peace.

Peaceful coexistence between Kenyan Christians and Muslims has come under pressure in recent years with attacks on churches by Somalia al-Shabab Islamists. In an attempt to ignite religious tensions, the group recently started separating people according to their faiths before killing Christians.

In the April 2015 Garissa University College attack, the group separated Christians and Muslims before killing 148  people -- mainly Christian students. In 2013 in the Westgate upscale shopping mall attack, the faiths were also separated.

Mzera said the painting project has drawn Muslims and Christians closer together, with members of each faith joining the other for worship.

“Muslims came to church one Sunday and we prayed together. They sought to end the stereotype that they are terrorists,” said Mzera.

So, too, have Christians prayed at the nearby mosque.

Related Posts
By Amy Klein
What good is faith when your fertility treatments aren't working?
By Darren Tyler
How coronavirus lockdowns in the US starve vulnerable abroad
By Kelly Wairimu Davis
Amid pandemic, the Wichita Kenyan community unites virtually through food and family
By Alejandra Molina
Four young people of different faiths move into a home together, then a pandemic happens
By Jeffrey Salkin
Warning: Your piety might be dangerous to your health