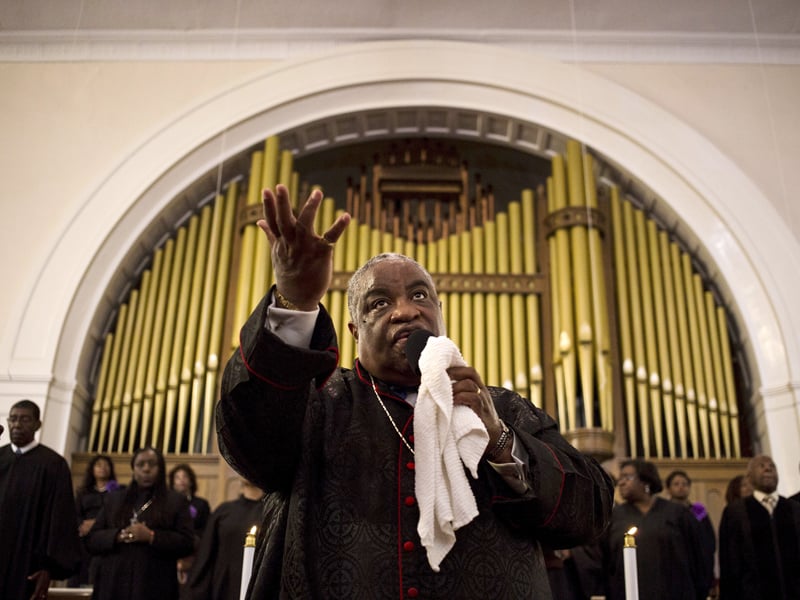 The Rev. John Foster gives a sermon at the Big Bethel AME Church in the Sweet Auburn neighborhood of Atlanta on Sept. 20, 2015. Photo courtesy of REUTERS/Brittany Greeson *Editors: This photo may only be republished with RNS-CHURCH-SHOPPING, originally transmitted on Aug. 23, 2016.
August 23, 2016
Lauren Markoe

(RNS) Top-notch preaching most attracts people looking for a new place to pray.

That's the conclusion of a new Pew Research Center study, released Tuesday (Aug. 23), which asked 5,000 people about their search for a new church or other house of worship.

"This is what people value in a congregation -- a good message, a good homily that resonates with them and gives them guidance," said Greg Smith, Pew's associate director for religion research.

More than 4 in 5 people (83 percent) put preaching at the top of their checklist. Preaching was followed by clergy and lay leaders who make them feel welcome (79 percent) and an appealing style of service (74 percent).

And for those pastors, imams and rabbis who are wondering how a snazzy website factors into potential congregants' searches, the survey reveals that in-person encounters carry much more weight.

"This may be because some of the factors people say they value the most in choosing a congregation -- the quality of sermons, the style of services and a welcoming leadership -- are difficult to assess over the phone or on a website," the researchers concluded.

Why do people look for a new house of worship?

The most common reason given (34 percent) is because a congregant has moved. Far less frequently did respondents cite a theological reason or dissatisfaction with the house of worship they used to attend, or the clergy who led it.

About half of those searching for a new congregation (48 percent) considered switching denominations. But for two groups in particular -- Catholics and members of historically black churches -- switching is uncommon, with only a third reporting such a change as a consideration.

"When searching for a new congregation, Americans value quality of sermons and feeling welcomed." Graphic courtesy of Pew Research Center

The survey also found that:

-- Half of American adults (51 percent) say they attend religious services regularly -- at least once or twice a month.

--Seven in 10 people who have looked for a new congregation say finding one was easy, while 27 percent say finding a new house of worship was difficult.

The overall margin of error for the survey, which was conducted in spring 2015, was plus or minus 2 percentage points.