NAIROBI, Kenya (RNS) As Turkish authorities push for the closure of African schools affiliated with Imam Fethullah Gulen — accused of masterminding this summer’s coup attempt in Turkey — some caution that the crackdown could inadvertently benefit Islamic fundamentalists on the continent.

Turkish President Recep Tayyip Erdogan, who accuses 75-year-old Gulen of running a parallel Turkish state from his Pennsylvania compound, has sought to neutralize the influential cleric well beyond Turkey’s borders, including in Africa, which is home to hundreds of Gulen-affiliated schools.

Abdallah Kheri, who in Kenya heads the Islamic Research and Education Trust, worries that shuttering Gulen schools and other institutions could leave a vacuum that the so-called Islamic State will seek to fill. “Closing down the institutions would definitely grant gains to the fundamentalists,” he said.

Gulen’s engagement in Africa and throughout the world is through a movement known as “Hizmet,” Turkish for “service to others.” The movement describes itself as a faith-based, nonpolitical, cultural and educational network that cultivates interfaith dialogue. It has planted hundreds of schools in Africa and elsewhere outside the Middle East. 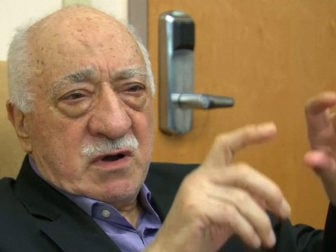 U.S.-based cleric Fethullah Gulen, whose followers Turkey blames for a failed coup, is shown in a still image taken from video, speaking to journalists at his home in Saylorsburg, Pa., on July 16, 2016. Gulen said democracy cannot be achieved through military action. Courtesy of REUTERS/Greg Savoy

In Kenya, the  Rev. Wilybard Lagho, Mombasa Roman Catholic diocese vicar general, said he would lament the demise of Gulen schools. “Islam is taught in the schools together with other universal values. I think young Muslims will most likely suffer setbacks with any closure,” Lagho said.

But some in Africa support Erdogan’s anti-Gulen efforts.

Sheikh Hamid Byamugenzi, the deputy director of the Islamic University in Uganda, believes that the Gulen movement — which has ties to a mystical and moderate approach to Islam known as Sufism — flouts traditional Islam. “The governments should take over the schools and send away the Gulen poison,” he said. “Their ideology weakens the true teachings of Islam.”

He added that Gulen-affiliated schools “are also too expensive to meet the education needs of many African ordinary children who need it.”

Erdogan is getting at least some African governments to comply with his plans to undermine Gulen worldwide.

In August, Sudan’s Ministry of Foreign Affairs announced it was closing two schools at the request of the Turkish government. And in Somalia — where Turkey is deeply involved in construction projects — the government shuttered two Gulen-affliated schools and a hospital.

But Kheri said that stamping out Gulen’s influence in Africa may prove very difficult, since its roots on the continent have grown strong in previous decades.

In some African nations, Gulen supporters are resisting Turkish calls to shut down schools.

Those who run the Nigerian Turkish International Colleges, a group of 17 schools, for example, have scolded Turkish authorities for seeking to shut them down.

The colleges are “not a Turkish government-run institution, but a privately funded institution by a group of Turkish investors,” said Orhan Kertim, the schools’ managing director, in a statement last month.

He called the Turkish ambassador’s call to close them “not only baseless, but also unfounded and of poor taste.”

News
Kenyan Rastafarians seek to legalize marijuana over doubts of other faith leaders
Follow us on Facebook!
Submit your photos to RNS