(RNS) Gedhun Choekyi Nyima was a 6-year-old boy when he disappeared from his home in Tibet in 1995. China’s government was the culprit, abducting him three days after the Dalai Lama had proclaimed him the 11th incarnation of the Panchen Lama. Twenty-one years after this unconscionable action, he remains disappeared, with Beijing claiming he is in its custody.

Countless individuals endure a similar fate across the globe, typically at the hands of governments that repress human rights.

Tuesday (Aug. 30) — the International Day of the Victims of Enforced Disappearances — we will mark their plight. Declared by the U.N. General Assembly in 2010, this day stands as an indictment of every nation that is responsible for disappearances.

As the U.S. Commission on International Religious Freedom, on which we serve, has documented, many have been disappeared for reasons relating to religion.

The Panchen Lama is but one example from China. Among others are Catholic priests who refused to submit to China’s registration rules designed to control religious practice, and human rights lawyers like Gao Zhisheng who advocate for people of faith. Now under strict surveillance, he initially disappeared in 2009. In July 2015, Beijing launched a sweeping dragnet against other religious freedom defenders and human rights advocates, with nearly 300 arrested, detained or disappeared.

Russia is another perpetrator of religious disappearances. In the Tatarstan region, Suleiman Zaripov, a leading Russian Tatar imam, was disappeared in early 2016. In the North Caucasus region, officials wage a grinding battle against insurgent and peaceful Muslims alike, imposing “collective justice” through disappearances, as well as detentions, torture and murder.

After annexing Crimea in 2014, Russian forces began to subject its people to Russia’s religious freedom restrictions, from onerous religious registration rules to its extremism law. As in Russia, Muslims were disproportionately targeted, with the practice of Islam often conflated with extremism. In 2014, a number of Crimean Tatars were disappeared, including Islyam Dzhepparov and Dzhevdet Islayamov.

In Uzbekistan, the same government that holds an estimated 12,000 mostly nonviolent Muslim religious prisoners also is responsible for disappearing Muslim leaders such as Abduvali Mirzaev and his elder son, Obid Nazarov. In January 2016, the Uzbek government announced the death in prison of Akram Uldashev, a religious leader whose writings inspired an independent Muslim business movement.

Authorities had imprisoned him since 1999 for alleged involvement in a deadly bombing in Tashkent, a charge that human rights groups roundly dismissed as bogus. Uldashev’s family did not know his whereabouts within the Uzbek prison system since 2009. 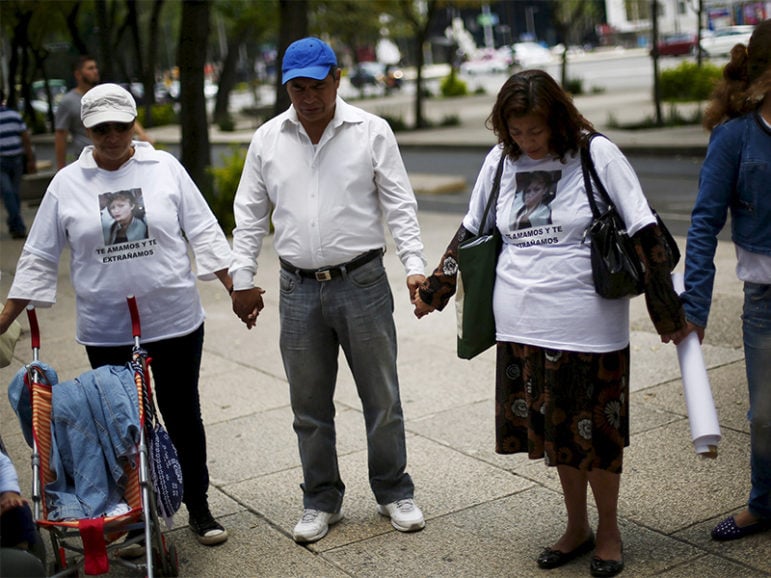 Relatives of missing persons pray in a demonstration to demand justice for their relatives during the International Day of the Victims of Enforced Disappearances in Mexico City, August 30, 2015. According local media, the U.N office for the Human Rights in Mexico, said that the country is in a critical situation on missing persons and called to Mexican state to take into consideration the opinions and experiences of the families of the victims of enforced disappearance and social organizations. Photo courtesy of REUTERS/Edgard Garrido

Another country notorious for disappearances relating to religion is North Korea, which restricts every aspect of its citizens’ lives, including religious practice. Anyone discovered engaging in clandestine religious activity faces draconian penalties including disappearance, torture and public execution. Because North Korea is such a closed society, it is hard even to know the names of the disappeared.

What can we do about those who have been disappeared and the nations responsible for disappearing them?

The International Religious Freedom Act of 1998, which created USCIRF, holds some answers. IRFA calls upon the State Department to designate nations that perpetrate or tolerate severe religious freedom violations as CPCs, or “countries of particular concern.”

CPC designations mark these states as the world’s worst religious freedom abusers, which may make them eligible for sanctions and other consequences. Among the IRFA criteria for CPC designation is the habitual practice of  “causing the disappearance of persons by [their] abduction or clandestine detention … ” Such a designation draws attention to those disappeared and the conditions that led to their incarceration.

The State Department rightly designates three of the four nations noted above — China, North Korea and Uzbekistan — as CPCs. As for Russia, its religious freedom situation is increasingly dire. If the violations in Russia reach the CPC standard of “systematic, egregious and ongoing,” then Russia, too, could earn a recommendation for CPC status.

Moreover, there are other nations that USCIRF recommends as CPCs, all of which are covered in our annual report, but that the State Department has not designated as such. Designating them as CPCs would be another important step.

Another meaningful action to take in support of the disappeared is to advocate vigorously on their behalf. One such effort that the U.S. House of Representatives undertakes is the Defending Freedoms Project.

Launched in December 2012 by the Tom Lantos Commission in conjunction with USCIRF and Amnesty International USA, the project works with members of Congress to advocate for the release of prisoners of conscience, including those who have been forcibly disappeared, and highlight the restrictive conditions that led to their imprisonment.

Equally important, beyond official action, people of conscience can and should take up the cause of the disappeared.

In the end, silence is the mortal enemy of the disappeared. Let us not be silent. Let us be a voice for the voiceless. Let us not rest until the disappeared are freed or accounted for and culpable governments are held responsible.

(Daniel Mark is a vice chair at the U.S. Commission on International Religious Freedom. Sandra Jolley is a USCIRF commissioner.)