Members of Mother Teresa's order, the Missionaries of Charity, and artist Chas Fagan, gather after the unveiling of an official canonization portrait of Mother Teresa at the John Paul II National Shrine in Washington, on September 1, 2016. Photo courtesy of REUTERS/Gary Cameron *Editors: This photo may only be republished with RNS-MOTHER-TERESA, originally transmitted on Sept. 2, 2016.
September 2, 2016
Josephine McKenna

VATICAN CITY (RNS) She may have worked in the gutters of Kolkata but she is considered one of the most influential women in the history of the Roman Catholic Church.

Mother Teresa, who died in 1997 at age 87, will be declared a saint at the Vatican on Sunday (Sept. 4) after dedicating her life to helping the poorest of the poor in the slums of India, and winning a Nobel Peace Prize and international renown for her efforts.

More than 100,000 people and 15 official delegations are expected to attend the canonization Mass for the diminutive, Albanian-born nun in St. Peter’s Square amid some of the tightest security ever seen at the Vatican.

At a press conference on Friday, Sister Mary Prema Pierick, superior general of the Missionaries of Charity order that Mother Teresa founded, reminisced about how her predecessor touched their lives.

“I was impressed by the energy and leadership she demonstrated,” she told reporters at the Vatican press office. “We all wanted to be close to her.”

Pierick said the late nun’s charity, tolerance and discipline inspired the nuns who worked with her.

“She was always our mother and also our teacher,” she said. “Her poverty was very simple. She shared what all the sisters had, nothing extra.”

Mother Teresa was born Agnese Gonxha Bojaxhiu of Albanian parents in Skopje in 1910 in what is now Macedonia. She became a nun at 16 and moved to India in 1929, creating her own order of nuns in 1950.

The order has since set up hundreds of shelters for the poor and needy around the world.

So great was her fame for service and sanctity that Saint John Paul II, a friend of Mother Teresa's and pope at the time of her death, waived the usual five-year waiting period and opened her cause for sainthood just two years after her death. John Paul then beatified her -- the second step toward formal recognition as a saint -- in 2003.

But her formula for "success" in holiness was simple, said the Rev. Brian Kolodiejchuk, a priest of the Missionaries of Charity Fathers who campaigned for her canonization: “She was always ready to show mercy and forgiveness to others.”

(Kolodiejchuk also quipped that Mother Teresa could turn out to be the patron saint of frequent flyers given all the traveling she did as she was much in demand after she won the Nobel Prize.)

The Catholic Church has more than 10,000 saints, many of whom had to wait centuries before their elevation.

“Mother Teresa is a saint for everyone, for the poor and the rich and for our time, devastated by so much violence and aridity of heart,” Kolodiejchuk told reporters at Friday's news conference. 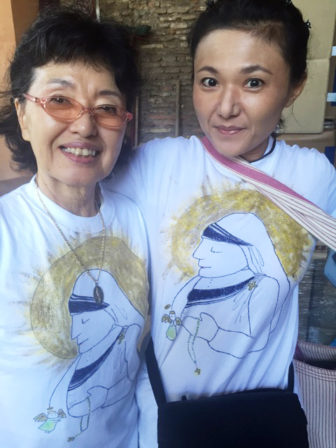 Hiromi Josepha Kudo, right, traveled from Japan with her mother to attend the canonization ceremony of Mother Teresa at the Vatican. They converted to Catholicism after meeting Mother Teresa in 1988. RNS photo by Josephine McKenna

A few miles from the Vatican, and days before the Mass, pilgrims were lining up to collect free tickets for the canonization from the nuns of Mother Teresa's order.

One of them, Hiromi Josepha Kudo of Japan, said Mother Teresa inspired her to convert to Catholicism and she traveled with her mother from Tokyo to attend the canonization.

"We met her in 1988. She was instrumental in our baptism," she told RNS. "She was like our godmother, really like a mother. Every Christmas we used to go to Kolkata to see her."

The nun was also a controversial figure to some.

Her critics accused her of romanticizing poverty and they questioned the quality of care in her homes and clinics. In 1991 the British medical journal the Lancet visited a home she ran for the dying in Kolkata and claimed untrained caregivers failed to recognize how some patients could have been cured.

She has been credited with two miracles, both involving the healing of sick people.

One of them, Marcilio Andrino of Brazil, unexpectedly recovered from a severe brain infection in 2008. He and his wife Fernanda, are in Rome to attend the canonization, which is considered a highlight of Pope Francis' Holy Year of Mercy.