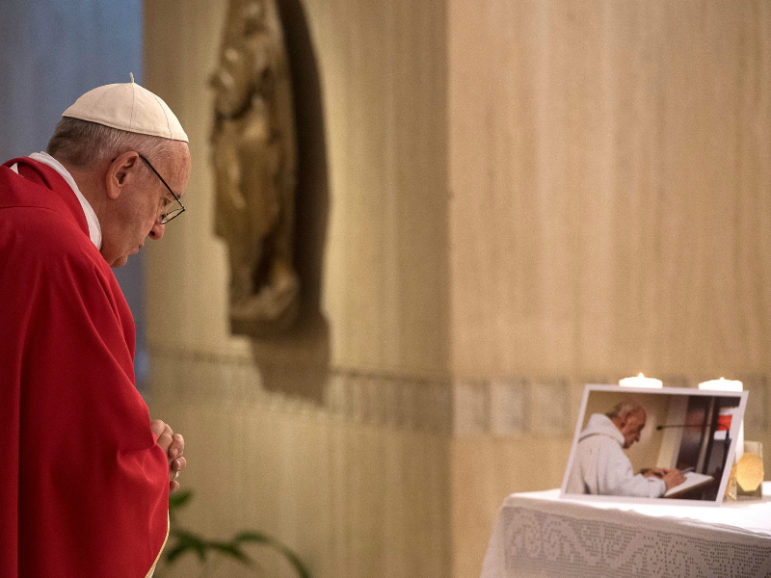 Pope Francis prays in front of a picture of the Rev. Jacques Hamel during a Mass in his memory at the Vatican, Sept. 14, 2016. Osservatore Romano photo via Reuters

(RNS) Pope Francis has effectively declared the elderly French priest slain by Islamic extremists while saying Mass in July a saint, telling worshippers that the Rev. Jacques Hamel stands in a line of recent Christian martyrs killed for their faith.

At morning Mass on Wednesday (Sept. 14) in the chapel at the Vatican guesthouse where he lives, Francis also pleaded for all religious traditions to say that “to kill in the name of God is satanic.”

The pontiff had invited some 80 pilgrims from the Archdiocese of Rouen, where the 84-year-old retired priest had his throat cut at morning Mass on July 26 by two attackers, to attend his Mass at the Vatican.

The attackers, radicalized young Muslims who had taken a small group of worshippers hostage, were later killed by police. The attack was the first committed in the name of the Islamic State group against a church in the West.

“Father Jacques Hamel had his throat slit on the cross, at the exact moment he was celebrating the sacrifice of Christ’s cross,” Francis told the congregants, including Hamel’s sister and the archbishop of Rouen.

“A good man, meek, brotherly and who always sought to make peace, was murdered as if he were a criminal. This is the satanic line of persecution,” the pope said, according to reports by Catholic News Service and other outlets.

When Francis entered the chapel for the daily 7 a.m. service — which was shown on Vatican television for the first time — he bowed before the altar, which had a photo of Hamel in front of two lit candles.

Archbishop Dominique Lebrun of Rouen later explained he had brought the picture with the intention of asking the pope to sign it and write a note for three nuns who had been with Hamel at Mass that day.

The sisters care for the sick and were not able to join the pilgrimage to Rome.

According to CNS, instead of signing the photo before Mass, the pope “immediately told me to put it on the altar” where it had been, the archbishop told reporters later.

“At the end of Mass, when he was greeting everyone, he signed it and said to me, ‘You can put this photo in the church because he is ‘blessed’ now, and if anyone says you aren’t allowed, tell them the pope gave you permission.'”

At Mass the pope also exhorted the congregants to see Hamel as a saint, saying: “We must pray to him — he is a martyr!”

Such veneration is normally reserved for those the church has launched on the lengthy process of canonization to formally recognize them as saints.

But martyrs, or those killed for their faith, are automatically considered among the “blessed” in heaven, and Francis’ gesture on Wednesday morning was characteristic of his desire to cut through ecclesiastical red tape and encourage grass-roots witness and devotion.

Some have called for the pope to immediately declare Hamel an official saint, which the pope can do in very rare cases.

While his statement to Lebrun did not rise to that level, it certainly provided encouragement to those who hope Hamel’s killing underscores the plight of persecuted Christians and also those who want a stronger campaign by the West against radical Islamists who are behind much of that persecution.

Francis has always been outspoken in defense of persecuted Christians, especially at the hands of Muslim extremists in the Middle East, while at the same time forcefully rejecting any association between genuine Islam and such violence.

In his homily Wednesday, Francis reflected on the many martyrs that are part of the history of the church and he said, as he has in the past, that “there are more Christian martyrs than there were at beginning of Christianity.”

Hamel, he continued, “is a part of this chain of martyrs. The Christians, who suffer today — be it in prison, in death or by torture — for not denying Jesus Christ, show the very cruelty of this persecution. And this cruelty that asks for apostasy, we can say, is satanic.”

Francis noted that even as he was about to have his throat slit, the priest “did not lose the lucidity to accuse and clearly say the name of his murderer. He clearly said, ‘Be gone, Satan.'”

“This example of courage, as well as the martyrdom of his own life when he gave himself to help others, to help create brotherhood, helps us to go forward without fear,” the pope said.

Hamel’s murder quickly prompted a passionate debate about whether he was a martyr or whether his death would be exploited to single out Islam for blame.

Francis on Wednesday indicated both that Hamel was a martyr and that his murder should promote peace, not conflict.

In a news conference after the Mass, both Lebrun and Hamel’s sister, Roselyn, stressed that point.

Roselyn Hamel said that neither her brother nor Francis was blaming Islam. “God is love,” she said, according to CNS. Those who killed her brother “did so in the name of a god who is not the God of Islam nor the God of Christianity.”

“The assassins, I think, acted under the influence of the devil, of Satan,”  Lebrun added.