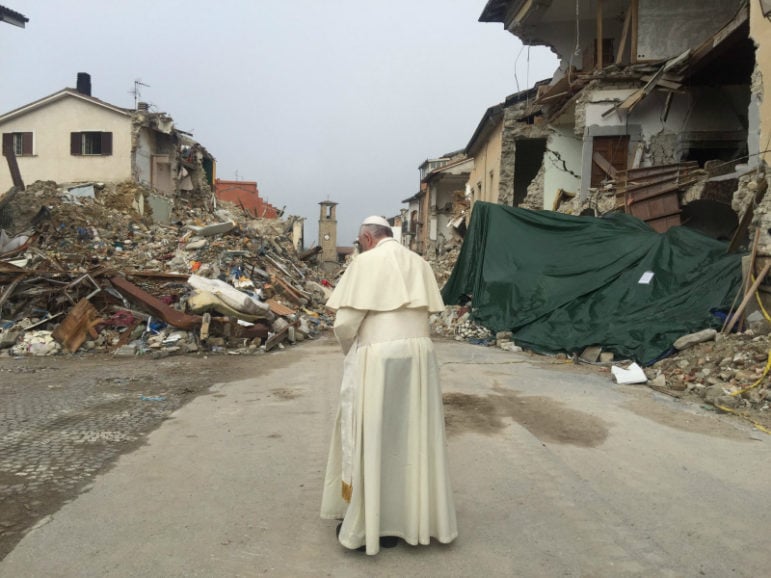 Pope Francis walks through the ruins of Amatrice on Oct. 4, 2016. The Italian town northeast of Rome was devastated in August by an earthquake that left nearly 300 dead. Photo courtesy of Vatican Press Office

ROME (RNS) Pope Francis made a surprise trip on Tuesday (Oct. 4) to survivors in cities devastated by a powerful earthquake that killed nearly 300 people in central Italy in August.

In what the Vatican described as a “private visit” to the town of Amatrice, the pope hugged townsfolk and toured the ruins with firefighters in the hardest-hit area, or so-called red zone. Much of Amatrice is still closed due to security concerns.

After he arrived in the town 100 miles northeast of Rome early Tuesday, the pope expressed his closeness to the survivors and urged them to face the future with courage.

He was accompanied by Bishop Domenico Pompili, whose diocese encompasses the area.

Francis toured Amatrice’s makeshift school, where he was warmly welcomed by elementary and middle school students who gave him several of their drawings.

He hugged children and adults and told people he had thought “long and hard” after the quake struck, saying he had wanted to visit but did not want to be “more of a hindrance than a help.”

“I thought long and hard in the first days of these many pains that my visit, perhaps, would be more of a hindrance than a help, a greeting,” the pope said, according to Vatican Radio. “I didn’t want to be a bother so I let a little time pass, so that some things could be resolved, like the school.

“But from the first moment, I felt that I needed to come to you! Simply to express my closeness to you, nothing more. And I pray, pray for you! Solidarity and prayer: This is my offering to you. May the Lord bless you all.”

In one widely shared image, the pope was shown walking alone in silent prayer through the ruined buildings down one of the main streets of Amatrice.

During his visit he met with a man who lost his wife and children in the quake, the Vatican said. He also visited a convalescent home where many of the elderly residents had been displaced by the earthquake. He greeted all 60 of them individually and had lunch with them.

After blessing victims and survivors, the pope said: “Let’s move forward; there is always a future. There are many loved ones who have left us, who fell here under the rubble.

“Always look ahead. (Have) Courage, and help each other. One walks better together, alone we go nowhere. Let’s go forward!”

Since the 6.2 magnitude quake struck on Aug. 24, Francis has expressed his intention to visit the quake-stricken zone but he never announced a date. In the days after the quake he telephoned Pompili several times and also indicated he wanted to visit the region “to be close to the people.”

From Amatrice, the pope continued his visit to the nearby towns of Accumoli and Arquata del Tronto, which were also hard hit by the quake and hundreds of aftershocks that have left around 4,000 people homeless.

In Accumoli, he prayed in front of the Church of San Francesco, which was destroyed by the earthquake. In Borbona, another village, he spent almost two hours with the elderly there.

From there he traveled to Pescara del Tronto, stopping three times along the way to greet small groups of people.

The visit took place on the feast day of St. Francis of Assisi, the pope’s namesake and one of the most venerated figures in the Catholic Church, and especially in Italy.

Last Sunday during the in-flight news conference on his return trip from Baku, Azerbaijan, to Rome, the pope said that he would make this visit “privately, alone, as a priest, bishop and pope. But alone. I want to do this and I want to be close to the people.”