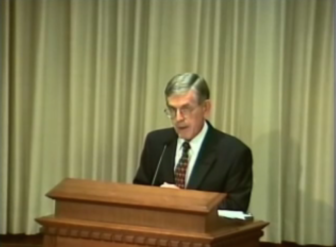 On Sunday morning, the YouTube channel “Mormon Leaks” posted more than a dozen videos taken behind closed doors between 2007 and 2012, showing the LDS Church’s top leadership in discussion on issues ranging from cybersecurity to homosexuality to the 2008 economic crisis.

Other people have already covered this story thoroughly and well (see here and here to understand elements of the videos; and here for the Church’s response). I’m not going to comment on the videos as a whole, except to say that while I am generally an “information wants to be free” kind of person, I oppose the underhanded nature of these videos’ release. It is unfair to have videos of our private conversations released to the world for public consumption without our permission. That’s true for anyone, not just church leaders. That’s just basic.

However, those videos are now out there in the world, and if there’s a silver lining to that it’s that at least one of them reveals helpful information about the Church’s challenges today.

The November 12, 2008 briefing titled, “In Which They Fret over the Young Single Adults,” intersects directly with the issues I’m addressing in my research on Mormon Millennials, so naturally I was keenly interested. Note that this information is now seven years out of date, and if we have learned anything from previous surveys about Mormon retention, it’s that things have only gotten worse over the last decade, so understand that these figures may in fact present a too-rosy picture of the present situation, at least in the United States.

The information presented at this meeting was straightforward and well-researched. I encourage you to watch the whole briefing if you are interested in the question of the next generation of Latter-day Saints and whether/why they are leaving the Church, but here are some key facts as presented to the Brethren by Alan Wilkins, a BYU professor and former mission president: 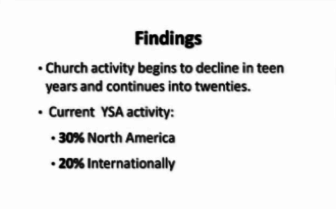 After Wilkins’s presentation ends around the 15-minute mark, the rest of the 50-minute meeting is the Brethren considering what to do. Actually, I found this part even more depressing than the inactivity statistics themselves.

For one thing, while then-Relief Society president Julie Beck is present at the meeting, she doesn’t speak until two and a half minutes from the end, when Elder Boyd K. Packer says, “President Beck, we should hear a mother’s point of view.”

Despite his use of the title “President,” the invitation has the pro forma feel of indulging the one woman in attendance – especially since he closes the meeting immediately after her remarks and no one appears to take her ideas seriously. (For the record, Pres. Beck challenged the whole paradigm of having singles wards, which she said “drain the lifeblood” of conventional wards internationally and aren’t all that successful in promoting marriage in the first place. But no one at the meeting seemed to be listening.)

The other reason I found the back-and-forth depressing is that it seemed clear that the Brethren were promoting bureaucratic solutions to the problem (let’s improve the way we keep our records, let’s plug YSAs into the church’s mission by sending them on service projects we decide upon) rather than actually listening to what they have to say about why they are not interested in attending.

Also, they seemed bent on treating the YSAs in the same way the Church treats youth. This is evident in the structure under consideration: There’s to be a stake YSA committee and a ward YSA committee, and grown-ups with certain leadership callings are expected to serve on them—a member of the bishopric, a member of the RS presidency, etc. And then “some young single adults” will also be on each committee, but they frankly feel more like afterthoughts than vital members, let alone leaders. The feel of this is that they are not seen as grown-ups. What’s strange about this solution is that Dr. Wilkins’s presentation was clear that the data consistently show that “if we don’t use them, we’ll lose them.” Singles, he said, will thrive in real leadership callings where they are given actual responsibility to set the course for something—not merely follow direction as the least important members of a committee that is supposed to serve their needs.

In other words, the proposed solution feels patronizing. We are treating YSAs in their 20s and 30s like teenagers who need adult supervision. This came home clearly during the Q&A when this comment was made:

“I wonder if the trend that we see emerging at the YSA age doesn’t start much, much earlier. And we should, must, do what’s been recommended . . . but if we watch the pattern among the Aaronic priesthood, that pattern of loss simply carries through into the YSA effort.

I’m curious as to whether or not we couldn’t go back further and start addressing the needs of YSAs in terms of their service in the church instead of being entertained in the church. In terms of significant callings in Aaronic priesthood with the responsibility that goes with it—not to the exclusion of activities, but something really substantive—and start to develop a new trend, a trend that says to a very young man, ‘This is precious.’

I really do believe, brethren, that the opportunity for young people who bear—young men, for example, who bear the Aaronic priesthood—in terms of substantive service and contribution to the kingdom [there] is far more than we are tapping. And the pattern they become used to is simply a pattern, an expectation, that continues into their YSA life. They’re used to being entertained. They’re used to being given things. They’re used to staying on the sideline while others do things. And when they’re YSAs, that’s where they end up.” [Note: retaining women and girls is not mentioned here at all.]

So the idea is that single adults just want to have fun, that they’re only interested in entertainment. Really? Where are we getting this?

Then Elder Packer chimes in with this:

“The one word that’s been missing in all of this is family. It hasn’t been said once. [It had, actually.] I wish you’d go back and analyze everything you’ve done and intrude the family into the middle of it, and see what’s happening there. The original jurisdiction until they’re married is in the parental home, in the family.

We spend a lot of time on what they do, as compared to trying to figure out what they are. And if you do some real skull practice on that . . . and also where’s the family fit into all this. This activity we have, running in all directions, and where’s Dad and Mom?”

Again, this makes it sound like single adults are overgrown children, still in need of their parents’ direct supervision.

I hope that in the intervening eight years, there has been more listening and less programming of our single adults in the Church. (There has, at least, been a very slight improvement in having a few women present at some high-level church meetings.) If we’re serious about retaining our young adults, we need to be serious about treating them like young adults, not like children we’re trying to marry off so they can join the land of the grown-ups.