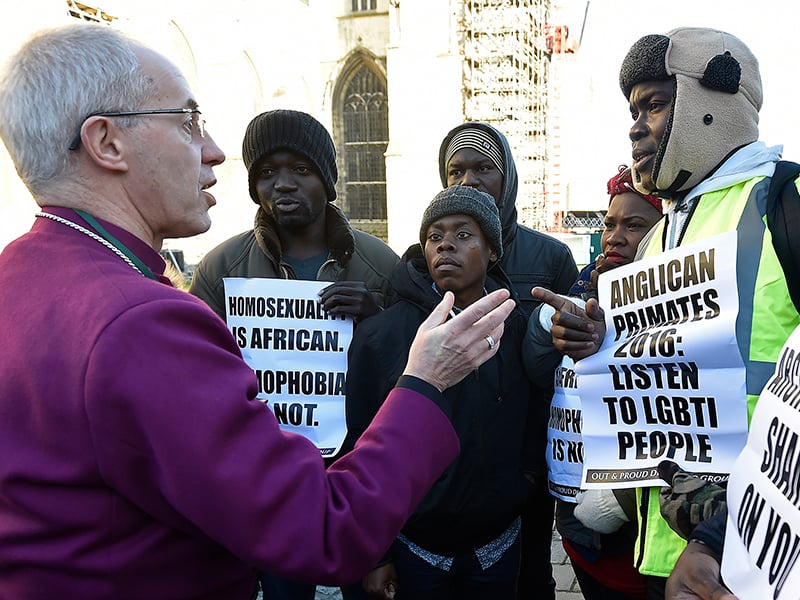 Archbishop of Canterbury Justin Welby, left, speaks with protesters on the grounds of Canterbury Cathedral in Canterbury, southern Britain, on Jan. 15, 2016. The Anglican Church has slapped sanctions on its liberal U.S. branch for supporting same-sex marriage, a move that averted a formal schism in the world's third largest Christian denomination but left deep divisions unresolved. The Anglican Communion, which counts some 85 million members in 165 countries, has been in crisis since 2003 because of arguments over sexuality and gender between liberal churches in the West and their conservative counterparts, mostly in Africa. Photo courtesy of REUTERS/Toby Melville *Editors: This photo may only be republished with RNS-ANGLICAN-SAMESEX, originally transmitted on Oct. 5, 2015.
October 5, 2016
Fredrick Nzwili

(RNS) A vote by South African Anglicans to reject the blessing of same-sex unions registered under South African law does not reflect the reality of diversity in the province, some church leaders and gay rights activists say.

The Provincial Synod of the Southern Africa Province -- the top decision-making body -- voted last week (Sept. 30) to reject the measure, with 16 bishops opposed and six favoring. Sixty-two percent of lay representatives to the synod voted against it (41 votes to 25), and 55 percent of clergy (42-34).

For many, more urgent priorities such as food security, shelter and health care overshadow gay rights. Some of the bishops consider polygamy a much higher priority than gay rights.

The rejection was a blow to LGBT activists and their supporters who held some hope for full inclusion in the church now that South Africa allows same-sex marriage.

Archbishop Thabo Makgoba, the spiritual leader of South African Anglicans, spoke of “palpable pain” in the church over the vote.

“The pain on both sides is palpable and tangible, and the image of a double-edged sword pierces me,” said Makgoba. The Anglican province covers Angola, Lesotho, Mozambique, Namibia, South Africa and Swaziland.

A motion that proposed licensing of LGBT clergy was withdrawn before it could be debated. 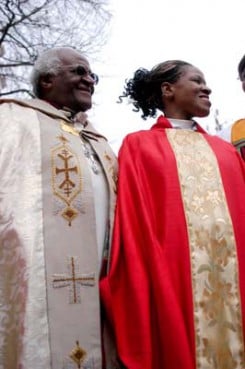 (RNS) The Most Rev. Desmond M. Tutu, former archbishop of Cape Town, and Mpho A. Tutu answer questions after the elder Tutu ordained his daughter an Episcopal priest at a 2004 ceremony in Alexandria, Va. RNS file photo by J. Carrier

In May, the Rev. Mpho Tutu, daughter of Archbishop Emeritus Desmond Tutu, gave up her clergy credentials after marrying a woman.

“It’s a painful experience, disappointing and sad,” said the Rev. Judith Kotze, the director of Inclusive and Affirming Ministries, a nonprofit organization that helps faith-based groups promote the full inclusions of LGBTs. “It is not honest and does not reflect the reality within the Anglican dioceses.”

Kotze said the motion would have allowed a local option, where some churches could bless same-sex marriages and others could maintain the status quo.

She highlighted a growing push within the Anglican Church of Southern Africa -- led by Makgoba -- that wants to move forward with this.

“They must not give up. The dialogue, the pressure and protests needs to continue,” said Kotze.

In 2015, in a landmark decision, the Dutch Reformed Church in South Africa voted to recognize same-sex unions. It also voted in favor of ordaining gay ministers and scrapping an existing celibacy clause. The decision drew a huge backlash.

“The problem is, implementation is not happening,” said Kotze, a qualified minister in the Dutch Reformed Church in South Africa. “We want the church to start implementing the synod decision.”

In some Southern African countries, violence targeting same-sex unions has been escalating. In Malawi, youth pastors threatened to take the government to court to force the arrest of 4,000 gay people living in the northern city of Mzuzu.