(RNS) Religion hasn’t played much of a role in the presidential campaign. Sure, Donald Trump made a faux pas when he placed cash on the Communion plate. And Hillary Clinton has occasionally invoked a phrase popular among members of her Methodist faith to discuss how her religious beliefs undergird her career in government.

But mostly the major parties’ two presidential aspirants have kept faith at a distance, as did the moderator of their debate on Sept. 26. 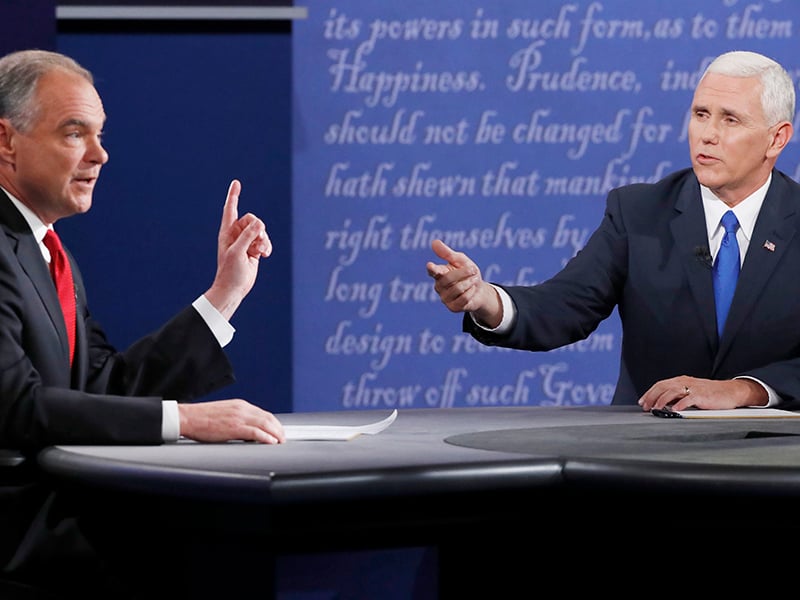 “You have both been open about the role that faith has played in your lives,” Quijano said. “Can you discuss, in detail, a time when you’ve struggled to balance your personal faith and a public policy position?”

For those for whom faith is central in their lives — and for those who believe faith plays too big a part in political decision-making — Quijano’s question and the candidates’ answers made for a highlight of the campaign.

And the Twitterverse noticed that faith had entered into the discussion, from Kaine’s mention of his Jesuit education to Pence’s talk about his opposition to abortion.

‘Jesuit’ spiking again. Spiked during Kaine’s speech at the DNC too. #VPDebate https://t.co/47UTs8XGPk

But the discourse on religion could be a fleeting one this election season.

“My suspicion is that this is it,” The Brookings Institution’s Bill Galston said of the vice presidential candidates’ discussion of faith. “I do not expect a theological discussion between Hillary Clinton and Donald Trump.”

But it could have been different, he continued, had the Republican who came in second to Trump in the GOP primaries won the nomination. Ted Cruz, the Texas senator who kicked off his campaign at Liberty University, a stronghold of conservative Christianity, eagerly talked about his own Christian beliefs on the campaign trail.

Instead, Galston said: “The Republican Party decided to nominate someone whose religiosity is not central to his public persona.”