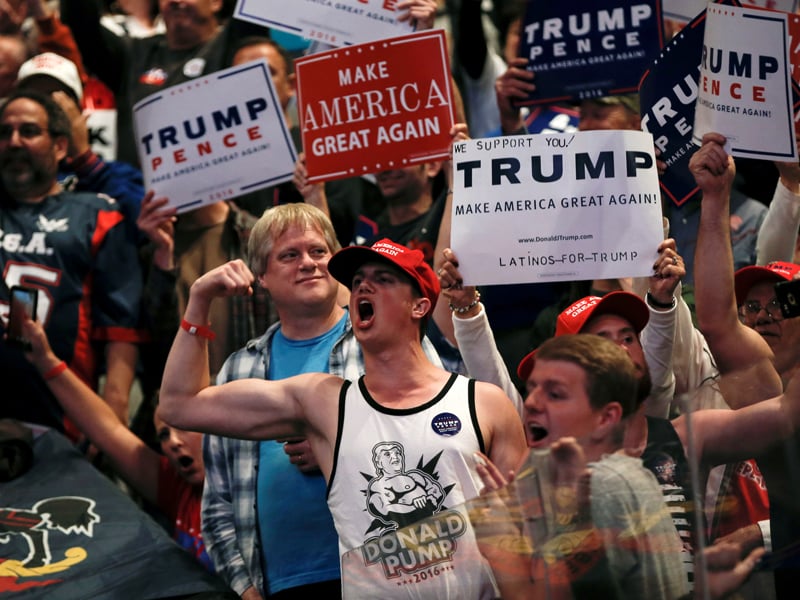 Supporters of Republican presidential nominee Donald Trump cheer at a campaign rally in Wilkes-Barre, Pa., on Oct. 10, 2016. Photo courtesy of Reuters/Mike Segar *Editors: This photo may only be republished with RNS-TRUMP-EVANGELICALS, originally transmitted on Oct. 11, 2016.

(RNS) Donald Trump’s support has plummeted in the past week — but white evangelicals are sticking with him.

“Among religious groups, white evangelical Protestants are the only ones who are standing firm right now,” said Dan Cox, research director at the Public Religion Research Institute, which conducted the poll with The Atlantic Survey.

The poll, released Tuesday (Oct. 11) — and taken during the days surrounding the release of a tape of Trump bragging about forcing himself on women — shows his support has eroded among female voters and most religious groups during the past week.

But white evangelical Protestants show no statistically significant change in their willingness to vote for Trump, with 65 percent of them in his camp.

That contrasts with white Catholics Protestants, for example, who are defecting from the Republican presidential nominee. They went for Trump over Democratic nominee Hillary Clinton, 56 percent to 31 percent, in a survey concluded on Oct. 2. In this latest survey, white Catholics reversed themselves, favoring Clinton over Trump, 46 percent to 42 percent.

“For Republican candidates, white Christian voters have been crucial, and this white Christian wall — we’re starting to see cracks in it,” Cox said. “White Catholics and white mainline Protestants — they have strongly supported Republicans. They’re divided now (between Trump and Clinton). That’s amazing.”

And though there aren’t numbers yet, he added, there is evidence that Trump is underperforming among Mormons, perhaps making Utah — a historically red state — competitive in the presidential election. 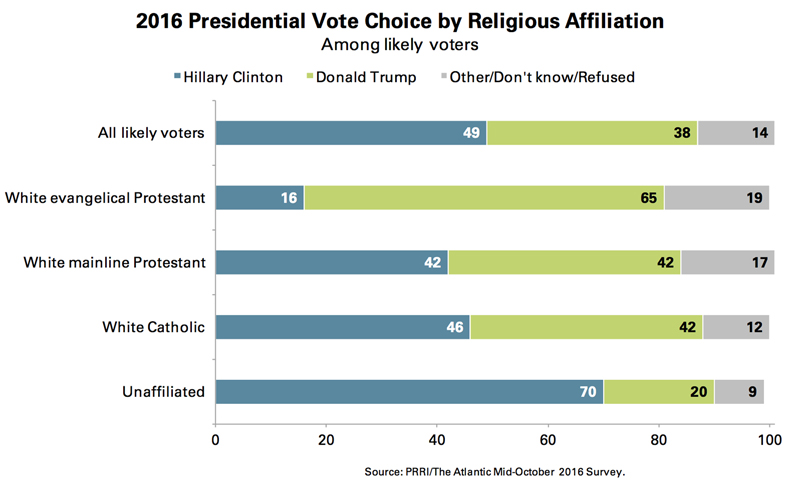 Overall the poll shows that Clinton holds an 11-point lead over Trump and that she has increased her lead over him for the second week in a row. Nearly half (49 percent) of the poll’s 866 likely voters said they would cast a ballot for her, as opposed to 38 percent for Trump. These numbers mark a steep fall in support for Trump, and an edging upward for Clinton.

The poll — which has a margin of error of plus or minus 3.9 percentage points — went into the field from Oct. 5-9. The tape of Trump speaking lewdly about women and boasting that he could do “anything” with them given his star power was released on Oct. 7.

But Cox warned against overestimating the effect of the tape on voters. Trump was already losing ground with women before the tape’s release. His remarks about Miss Universe’s weight gain during and after the candidates’ Sept. 26 debate helped cement his reputation as a man who degrades women.

Though evangelicals are hardly budging in their willingness to vote for Trump, they have overall lent him significantly less support than they have Republican presidential nominees in the past. Traditionally, the GOP standard-bearer can expect the votes of about 80 percent of white evangelical Protestants. In this campaign, about 65 percent to 70 percent have expressed support for Trump.

But even these numbers baffle many evangelicals and nonevangelicals alike, who say his rhetoric and life story make voting for him impossible.

Trump has shown no sustained interest in his Presbyterianism, has twice divorced and has disparaged Latinos, Muslims and other groups, seeming to defy the biblical command to embrace “the stranger.”

Christianity Today, a flagship publication of evangelical Protestantism, editorialized Tuesday against Trump in a piece that argued: “Evangelicals, of all people, should not be silent about Donald Trump’s blatant immorality.”

Some evangelicals support Trump perhaps not so much because they admire him, but as a foil to Hillary Clinton, who is the focal point of much of their disdain.

But even after the release of the salacious audio Friday, evangelicals could not be faulted for wondering whether Trump’s behavior would ever tip their leaders against him — some said they would take their vote elsewhere, but plenty affirmed their support for the Republican nominee.