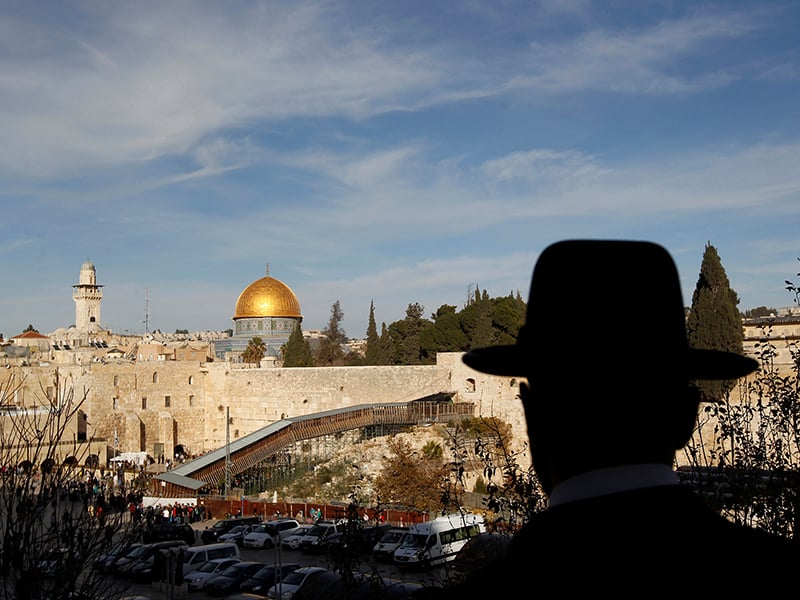 An ultra-Orthodox Jewish man stands at a point overlooking a wooden ramp leading up from Judaism's Western Wall to the sacred compound known to Muslims as the Noble Sanctuary and to Jews as Temple Mount, where the Al-Aqsa Mosque and the Dome of the Rock shrine stand, in Jerusalem's Old City on Dec. 12, 2011. Photo courtesy of Reuters/Ronen Zvulun
October 13, 2016
Lauren Markoe

(RNS) Jewish groups are deploring passage of a U.N. agency resolution that highlights Muslim ties but ignores Jewish connections to the Temple Mount.

The resolution of the United Nations' cultural arm passed Thursday (Oct. 13) 24-6 with 26 abstentions and condemns Israel's "escalating aggressions" at the Temple Mount, the site of the Al-Aqsa Mosque, the third holiest site in Islam.

The resolution, put forward by Palestinian representatives to UNESCO, does not mention the significance to Jews of the Western Wall that flanks the mount. The Western Wall is regarded as the holiest site in Judaism.

"Let’s be clear what’s at work here," said American Jewish Committee CEO David Harris. "This is another attempt to undermine the very foundation of the state of Israel and the documented, age-old historical Jewish connection to the land."

The resolution calls out the Jewish state for incursions at the Temple Mount and refers to it only by its Arabic name, "Haram al-Sharif." While the measure notes Jerusalem's importance to the three Abrahamic faiths -- Judaism, Christianity and Islam -- it disregards Jewish religious and historic connections to the Temple Mount.

Muslims and Jews have long charged each other with incitement at the site. Palestinians condemn Israelis for limiting their access to it. The top of this mount was, according to the Quran, where the Prophet Muhammad landed in 620 on his night journey to heaven. The Temple Mount is administered by a waqf, or Islamic trust. But Israel ultimately controls access to it.

Israelis charge Palestinians with abusing Jewish worshippers at the Western Wall, which sits below the mosque and is believed to be a remnant of the retaining wall of the Jewish temple destroyed in the year 70.

Jews also consider the top of the mount holy ground -- the place where Abraham offered to sacrifice Isaac. Although they may ascend the mount, Jews are forbidden from praying there. Some extreme right-wing Jews have agitated for the construction of a third temple at the site.

Israeli diplomats had pressed European countries to vote against it, and many abstained; none voted for it. Several European nations had supported a similar UNESCO resolution that passed 33-6 in April.

The six countries voting against the resolution were: the U.S., the United Kingdom, Germany, the Netherlands, Lithuania and Estonia.