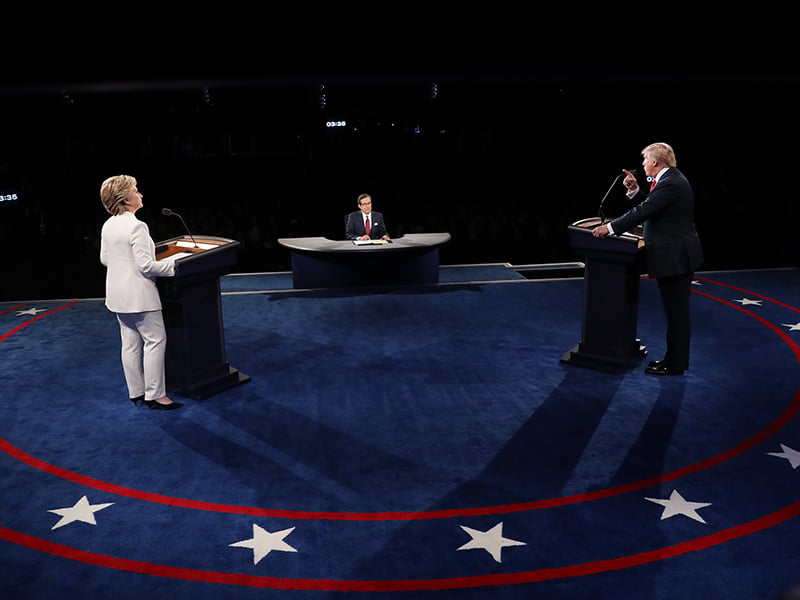 (RNS) Candidates shaking hands before or after the debates is a time-honored gesture of civility, respect and mutual faith in the democratic process.

Donald Trump and Hillary Clinton did not shake hands, neither before nor after Wednesday’s (Oct. 19) third and final presidential debate.

But though they may be inconsequential to election outcomes, debate pageantry and decorum loom large in American civil religion.

Right from the start, the nominal Presbyterian and the quiet Methodist sharply contrasted each other.

Facing likely defeat in November, Trump aimed to energize his aggrieved disciples and remind traditional Republicans that he is their nominee, too.

As the front-runner, Clinton could afford to make gestures toward what few independent or undecided voters remain. Instead, she reaffirmed the most inflexible aspects of her party’s ideology.

In a setting that has become part and parcel of our country’s civil religion, a presidential debate, the missing handshake symbolized an icy and intensifying disdain between the candidates and the American public.

Trump preached Republican Party orthodoxy on the Supreme Court, abortion, gun rights and immigration. The party faithful must decide whether he is sincere.

On abortion rights, Trump gave the most stridently anti-abortion comments we have heard so far, though he failed to enthusiastically affirm that he wants the Roe v. Wade decision overturned.

Improbably, he spoke with moral clarity, in contrast to Clinton repeating the most unpopular aspects of the Democrats’ ever more extreme platform on abortion.

She strongly defended women’s right to make abortion decisions “with their families in accordance with their faith [and] with medical advice.”

On guns, the same tired rhetoric prevailed. This is an issue that has fascinating faith connections. Religious conservatives strongly support gun rights. Many liberals ground their support of gun control laws in their faith.

The candidates’ discussion of illegal immigration also included rehearsed lines meant to energize base voters. Neither candidate noted that many Americans look to their faith for guidance on how to think about issues of migration, hospitality, inclusiveness and citizenship.

Appropriately, neither candidate appealed to religion in their discussions about fitness for office. Trump denied recent accusations that he had sexually assaulted women. Clinton pounced on Trump’s repeated claim to not need much forgiveness:

“He immediately goes to denying responsibility,” Clinton said. “And it’s not just about women. He never apologizes or says he’s sorry for anything.”

Both candidates have high negatives, but Clinton’s experience in public service sharply contrasts with Trump’s decades of self-serving narcissism. Though not mentioned, her enduring faithfulness and forgiveness in a 41-year marriage also contrasts with the thrice-married playboy with wandering eyes (and hands).

A depressed Democratic base could seriously reduce Clinton’s margin of victory. But for all the nastiness she has endured, she will have to summon an extra measure of magnanimity to reach out to Trump’s supporters.

She does not have to dignify Donald Trump with a handshake. But if the next President Clinton hopes to unify a divided country, she might consider Methodist founder John Wesley’s plea for unity: “If your heart be as my heart, give me your hand.”