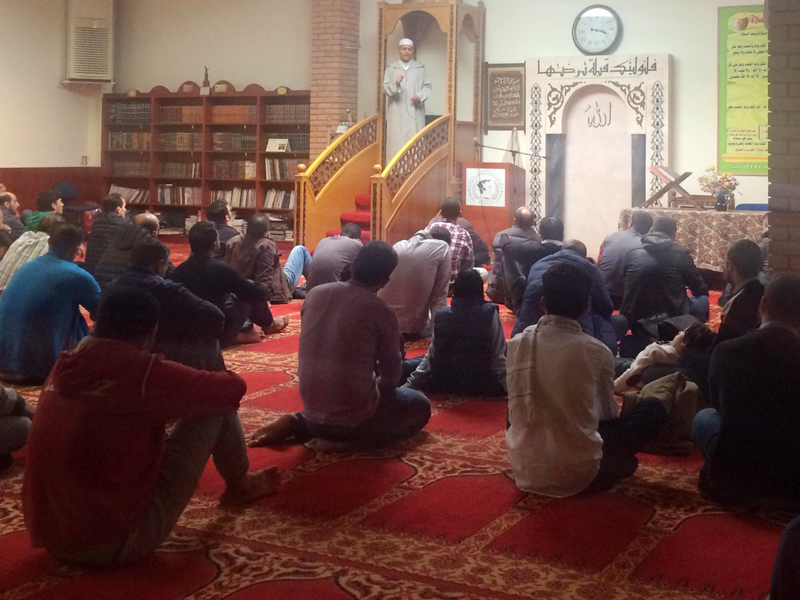 Worshippers pray during Friday prayers at the Arab-Hellenic Center for Culture. RNS photo by Umar Farooq

ATHENS, Greece (RNS) Shah Malik ducks to enter a space that, from the street, looks like any other storefront in the central Omonia district.

The neighborhood — with blocks of shops offering imported spices, halal meat or the milky tea popular in South Asia — is home to immigrants from Afghanistan, Pakistan and Bangladesh. It’s time for evening prayers, and Malik, who came to Greece from Pakistan 14 years ago, heads to the local mosque.

“It’s like not having a set place to live, when you don’t have a mosque for people to gather,” he said.

Masjid Usman, as a handwritten sign taped beside the entrance reads, is actually registered as a library. At least 200,000 Muslims live in Athens, but of the 120 prayer spaces in the city, only three have been able to navigate a complex maze of legal restrictions to register as mosques. The rest, like Masjid Usman, operate as libraries or cultural centers — instead of as nonprofit places of worship that enjoy a range of legal protections in Greece — and could one day be shut down if authorities decide to enforce the law.

But last month, Greek authorities announced a contract had been awarded for the construction of a state-funded, properly registered mosque — the first since the nation’s independence from the Ottoman Empire nearly 200 years ago.

RELATED: Greek hospitality is put to a religious test

The mosque, expected to cost about $1 million, will have capacity for around 300 worshippers and is being built in a former naval repair yard in the Votanikos neighborhood of Athens, west of downtown.

“We have been hearing about this for decades,” said Malik, who serves as the makeshift mosque’s treasurer, “and if it happens, if it actually gets constructed, it would be great. It would allow us to feel like we can have an open presence here.”

Arab diplomats in Athens have been trying to get permission to build a mosque since the 1970s, and for more than a decade the Greek government has been trying to find space for such a facility, but anti-immigrant groups and the powerful Greek Orthodox Church have hampered the efforts.

Ottoman rulers had built mosques throughout Athens, even converting the Parthenon into one, but these structures were either destroyed or repurposed for uses such as warehouses or army barracks.

The 1923 Treaty of Lausanne granted rights to around 100,000 Muslims in majority ethnically Turkish parts of Greece, such as allowing them to have their nonprofit foundations, have their own cemeteries for burial and follow Islamic family law, a quid pro quo that saw similar rights granted to the Greek Orthodox minority in Turkey.

Those ethnic Turks were the only Muslims in Greece until the 1980s, when immigrants from Egypt, Libya, Pakistan, Afghanistan and Bangladesh began to stream in to the country, hoping to make a fresh start in Europe.

There have been recent waves of Muslim immigrants too — from Syria and Afghanistan. At least 60,000 are waiting for political asylum decisions in the country. But the Muslim communities are ethnically fractured and lack the funds or organization to register a mosque.

“You have to hire a bunch of lawyers and inspectors. You have to rent a proper space with safety measures, like multiple exits. It’s a shame, but most of us cannot afford to do that,” said Malik.

South of downtown at the Arab-Hellenic Center for Culture, the community is better organized than that at Masjid Usman, partly due to a multimillion-dollar donation from a U.K.-based Islamic foundation that helped the center convert a factory into the mosque in 2007. But today, funds have run out.

“We don’t even have money to pay the electric bill. We need maybe 50,000 euros to get this place registered” as a mosque, said Tariq Jizawi, as he wrapped up Friday prayers that were attended by around 100 men. Right-wing extremists targeted the center, one of the most visible mosques in the city, in 2014, leaving a pig’s head before the entrance, spraying graffiti and painting a cross on the door.

Registering as a place of worship would mean the community could hand operations over to a nonprofit foundation, ensuring the mosque’s sustainability, and be a legally protected religious entity in a country where xenophobic attacks on immigrants, and especially Muslims, are on the rise.

For Muslims like Jizawi, who immigrated to Greece from Lebanon in the 1990s, it’s time the Greek government followed the example of other European nations.

“They fund the church. They should also give some funds to help mosques here,” he said.

Thousands of Orthodox priests are paid salaries by the Greek government, and the constitution refers to Greek Orthodoxy as “the predominant faith” of the nation. Until 2008, all schoolchildren were required to attend daily prayers and theology classes.

The Greek government has tried to find space for a mosque on five occasions in the last 15 years; each time it was rebuffed by lawsuits and public denunciations.

Local bishops have been particularly outspoken.

“Who would imagine almost 200 years after our national rebirth and the memory of our slaughter by the Turks, we would be forced to make statements against blood-thirsty Islam that drowned our country in blood for centuries,” said Greek Orthodox Bishop Seraphim of Piraeus in 2015, deeming the mosque a plan to accommodate “Satan worshippers.”

Not all bishops have been so critical.

Bishop Bartholomew I of Constantinople has repeatedly called for a mosque to built in Athens.

Still, the issue of a mosque has become a rallying point for xenophobic groups in the country such as Golden Dawn, a now-banned political party whose members tried to firebomb a Bangladeshi mosque in the city, stabbed to death a Pakistani immigrant and led several violent protests over the years against the Votanikos district mosque project.

The new state-funded mosque will not meet all the needs of the large Muslim community in Athens. But, said Malik, it would be “an important step towards making us feel like we belong here.”